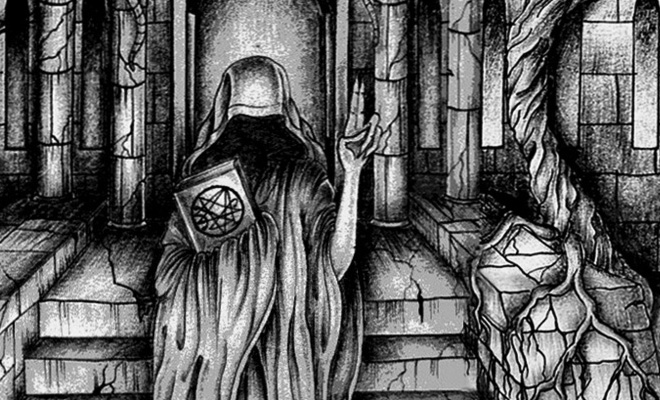 Yo, slime lovers, check it out, the two absolute best Italian stench-core/rotten crust bands (and among the best in the world for that matter) have just released a handful of releases which appear to have come out at the same time, and which are all fucking awesome, of course. What’s interesting is that the two bands also share some common members and appear to be an extended family of sorts in the Italian crust underground. Regardless, what’s really amazing about these two bands is just their awesomely decomposing-sounding music, which is hands down some of the best Deviated Instinct and Antisect-styled crusty filthy punk metal you will hear these days.

First off, we have the rotting musical grave represented by a new BLACK TEMPLE BELOW EP. Into The Black Temple is five tracks and a mere ten minutes of unadulterated, comatose, slithering sonic fucking slime. A hideous crossroad of sorts, where sludge, doom, crust, raw punk and black metal all converge into one focal point, creating an ugly and emaciated sonic graveyard of rotting filth. You can hear Eyehategod, Winter, Amebix, Beherit and Noothgrush get down to filthy business all in on place in these five corroded and hateful tracks. This band needs to be kept under tight surveillance, because as time passes and they keep releasing stuff, shit just keeps sounding better and better each time.

Next up are new releases by CANCER SPREADING, a crusty death metal monstrosity who feature on vocals Gabri from BLACK TEMPLE BELOW and UNDEAD CREEP (another horde of awesome freaks from the Italian crust and death metal underground) and who have just released not one, but two new splits, one with Russia’s FATUM and one with Belgium’s LAST LEGION ALIVE (R.I.P., unfortunately). The Split with LAST LEGION ALIVE is where CANCER SPREADING deliver the biggest amount of infecting slime: five tracks of corrosive, hideous and awesome death-crust, where again bands like Deviated Instinct and Skitsystem this time clash with the neck-snapping grooves of old school death metal bands like Bolt Thrower, Carcass, Nihilist, Entombed, early Obituary and the such, creating a super downtuned, filthy and furious death metal crust hybrid that also brings to mind bands like Acephalix, Vastum, Autopsy, Asphyx, Gorefest and Grave. On the same split, you will also hear LAST LEGION ALIVE‘s side, which is equally awesome and just as devastating, although with less purely metal elements and instead showcasing a shier and more introverted crust formula which embraces more post-punk and goth elements, creating the best Amebix worship you will ever hear. Ultimately they’ve created something that sounds like a super emaciated and rotten Joy Division or Killing Joke of sorts, overall turning the whole split into something nothing short than fucking amazing!

And finally, we have the last CANCER SPREADING split, this time with Russia’s FATUM. Each band provides one track, with CANCER SPREADING once again delivering their staple flesh-eating, zombie-like super awesome formula of brutal stench-core with the track Insomnia, and FATUM vomiting out a single slab of ultra bassy and corrosive d-beat crust that sounds like a garbage dump full of rats fighting for their lives. Get into this shit, when it comes to stench-core and the like, it doesn’t get any better than this!