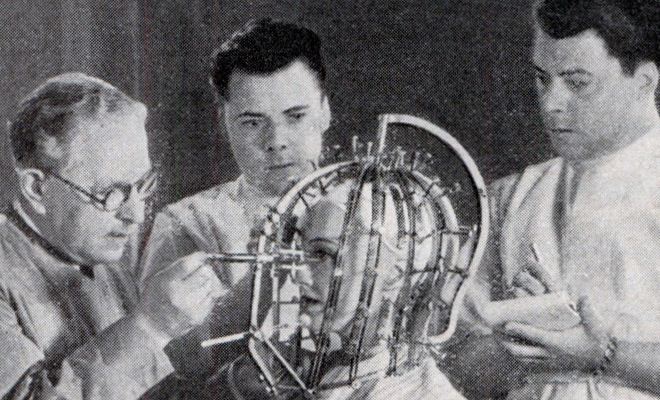 Prior to surgery being the norm for correcting beauty flaws, our ancestors had some creative and disturbing ways to make us all look “better”. Vibrators weren’t just for pleasure, they were for fixing everything from dandruff to constipation. You could hook yourself up to electricity to fix baldness and wrinkles. Want to lose weight? Go on a tapeworm diet. Put your head in a Hellraiser-style vise or in a vacuum sealed bag. Check out these devices and more below… “You have a beautiful face… But your nose?” If you were alive in the early 20th century and you didn’t like your nose, the good news is that you didn’t have to resort to expensive, painful rhinoplasty. The bad news is that your other option involved this painful-looking and unsightly Trados Nose-Shaper. Model 22 was pretty popular in 1918, if the number of ads is any indication, but “Face Specialist” M. Trilety didn’t stop there. By 1928, Trilety was a “Pioneering Noseshaping Specialist” who offered quick, painless and permanent nose correction with Model 25. Isabella Gilbert must have spent a significant portion of her life distressed over her lack of dimples, because in 1936 she invented this spring-loaded contraption that promised to “make a fine set” by pressing a pair of knobs into the cheeks. This seems like a commitment you would have to take seriously, since real dimples don’t just show up for a night out on the town. Anyone with “facial defects” in 1912 was fortunate to have Lillian Bender, who invented this super-comfy device which promised “removal of wrinkles and sagging flesh” by way of a fully adjustable rubber mask. Bender thoughtfully included an opening for the mouth, which was probably helpful since the elastic collar was tied corset-style around the throat. Targeted vibration worked so well for hysteria that it was soon prescribed for curing everything from cellulite to cankles. By 1950 the Electric Spot-Reducer offered a 10-day guarantee that the user would lose pounds and inches “without risking health,” which is at least half true. Problematic double chin got you down? Cheer up: Ads for the Professor Mack’s Chin Reducer and Beautifier from the 1890s say the device can eliminate and efface double chins, all while reducing “enlarged glands,” assuming you pull the cords hard enough. If your skin lacked that youthful glow sometime in the 1940s, the best available solution was to sit a spell under the Glamour Bonnet. The vacuum helmet reduced “atmospheric pressure around the beauty seeker’s head,” which inventor Mrs. D. M. Ackerman believed would help stimulate circulation and improve the complexion. And while a vacuum hose stole all of your oxygen, you could read through the handy plastic window. You’d be hard-pressed to find someone who can tell you how magnets work, but one thing is for certain: they can cure just about anything. OK, it’s not true, but no one mentioned that to Thomson, Langdon & Co., manufacturers of the Wilsonia Magnetic Corset, which advertised itself as both a remedy for indigestion, paralysis and nervousness and the key to a teensy tiny waist. Women weren’t the only ones to benefit from high-tech beauty aids in the early 1900s. A slew of baldness-reversing devices flooded the market, all promising improved hair growth and slower hair loss. One such instrument was Merke Institutes’ Thermocap, which was meant to stimulate dormant hair with heat and blue lights. Taking that approach one step further, the hair and scalp device shown here stimulated the scalp by sending an arc of sparks from the blown glass attachments to the head. Seems legit.

No collection of crazy-looking beauty contraptions would be complete without a nod to Maksymilian Faktorowicz, purveyor of fine cosmetics since he opened up shop as Max Factor in 1909. In addition to his excellent lipstick and eyeliners, Factor is also famous for developing the Beauty Micrometer in 1932, an instrument designed to detect a woman’s facial flaws so they can be corrected with makeup “by an experienced operator” before filming. The ad describes it as looking like a baseball mask, but that’s only because Hellraiser hadn’t been filmed yet. In this article:beauty machines, slider