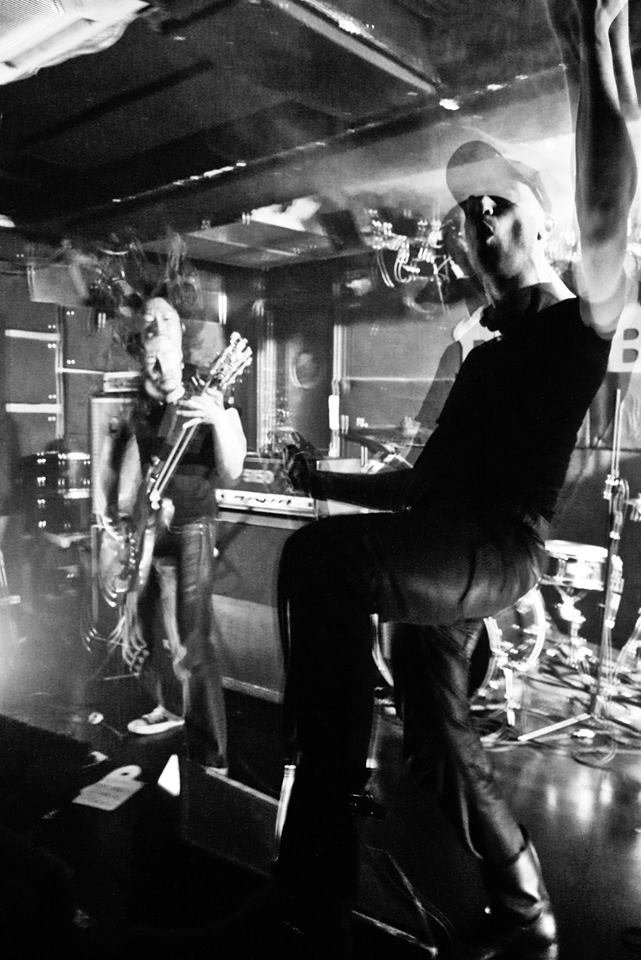 Legion of Andromeda are a unique force in underground metal. Today, the duo will release their debut full-length album, Iron Scorn, for At War With False Noise/Unholy Anarchy Records (order here). Iron Scorn was recently reviewed at Cvlt Nation by yours truly. Fitting then, that I would be interested in learning more about the insane duo’s creative process and plans for the future. So, without further ado…

First off guys, I want to thank you for doing this interview. Iron Scorn is truly different. It’s primitive and when played loud, sounds like absolute poserkill. Tell us about how you got together to form Legion of Andromeda in 2012, and the reception that the band has received from fans and the media since then.

Thank you, Al. For breakfast I usually play Whitehouse, Darkthrone, whatever, to always remind myself how much I fucking hate people, so I can then work more comfortably being charged with such pissed off sounds. My wife is of course annoyed by that and one day she confided this daily disgusting wake up situation to one of her colleagues. To her surprise, the colleague too reported the same frustration, given the deranged attitude of her husband in forcing her to listen to Big Black, discussing what a great genius Steve Albini is and plundering their family savings buying weird and costly handmade aluminum guitars. Surprised in discovering their husbands mutual mania, and comforted by sharing the same harassment, they then decided to introduce us. After countless listening sessions, millions of beers and shows attendances, -M- proposed to me to form a duo, and I accepted. The reception LOA has received from the outside world since then – with a quickly sold out demo, favorable reviews and being signed to a couple of great labels – still surprises us quite a lot…meaning, knowing that there are many braindead people eager to listen to such horrid shit makes us just a little more optimistic about mankind’s current status. Well, thanks for saying that, that’s quite an achievement. Of course Godflesh and VON are a major influence, but I ultimately think that LOA’s sound came from years and years of being extremely pissed off, from how we contend with life and existence, from our visceral love of music and, most of all, from ourselves. LOA’s sound is the natural reflection of all this, while the influence from other bands is more unconscious and subtle. LOA came ultimately from our own personas: it’s in this way that our sound is unique.

For fans who haven’t heard any of your music, including your demo, which sold out soon after its release, please describe what evolution has taken place in Legion of Andromeda’s sound since the beginning.

After recording the demo, which was quite good, we sharpened our attack and got more focused. That’s our real main achievement, as no evolution has been reached, no fancy developments were obtained, no other instruments were added, no more complexity within the arrangements was desired (instead, the song that closes the demo, “Fist Of The Galaxy,” while quite cool, sounds a little too much arranged: it was in fact the very first song we wrote). We got more primitive in our total disregard for modern hipster bullshit bands that infest the scene. And thanks to Steve Albini’s extraordinary production, whose cleverness is a rare thing nowadays in this world of human garbage, our first album sounds totally inhuman, huge and majestic. We’ll never be thankful enough to him. Involution is the key and achieving focus is LOA’s modus operandi. The guitar sound is really organic in this album. It’s downtuned and groovy. Do you start the songs from riffs? You sound like a couple of guys who do everything that Yngwie hates doing on guitar. How important are the riffs to your creative process?

Yes, riffs, which originate from the minds of both members, are always the beginning; the primordial pulp from which the songs are forged. Of course, the drum machine and the vocals are the other two essential parts of the whole: in this regard, guitar/vocals/drum machine are interdependent, as each element could not exist without the other. All three are paramount.

The drums sound pretty identical for each song. How do the drum patterns differ with each song in a way that listeners might not be aware of? What is this concept of rotational repetition employed with the drum patterns?

Again, no LOA without that old piece of junk that -M- stole from a high school party more than 20 years ago. The drum machine gives the pace for everything, it’s the pulsating core of the beast. It’s fucking quintessential. Being comprised solely of a ride cymbal and a double kick, it sounds totally brain dead, obsessively identical, psychedelic, sadistic. Minimalism is our path, repetition is liberation, the looping nature of LOA’s songs couldn’t be achieved without an identical rhythm pattern for all the tracks. It changes only in tempo and the rest is identical. The keyboard player from Anatomia, after repeated listening, said she could almost talk to that hammering presence, it was so repetitive and stuck inside her head. The principle of torture is repetition. It’s our attempt to reach altered states of consciousness. It’s ultimately the sound of the Cosmo Hammer which will crush you all. 
The vocals are a riot! They sound absolutely deranged. Are there any lyrics at all, or are they closer to being vocal attenuations to the music?

Absolutely there are. Lyrics are extremely important (you can read them on our bandcamp page) as they unveil the theme for each song. Those themes are just the single parts of the main theme: HATE. I also must stress that vocals, with the exception of some delay, are not effected. I just stuck the mic inside my mouth and cover my face with my hands: this causes me to salivate quite a bit contributing to distort the pronunciation, to alter the diction. The effect is just me.

You said it well: it’s a proven fact that the Andromeda constellation is approaching the Earth with the sole intent of devouring it…we’re the emissaries of Andromeda, we’re its Legion.

Do you have an eclectic set of interests? What other genres of music do the members like that help keep things interesting when not performing or writing music for Legion of Andromeda?

I’m actually listening to Miles Davis, while -M- is into Glenn Gould’s piano works. Besides metal, we grew up with and still love classic noise rock a la Unsane/Cherubs/Cop Shoot Cop: do you remember the early ’90 when labels like Touch & Go, AmRep, Trance Syndicate ruled the earth? The Pop Group, A Frames and Bong are on heavy rotation on my hi-fi, while -M- always listens to Leviathan before sleeping, as he’s totally obsessed with Wrest. The cover art is interesting. It looks like a beast clamping its jaws together, or something like that. Definitely not like Traci Lords on the set of Big Bang Theory. Was there a concept to the artwork in relation to Iron Scorn?

We wanted to pay homage to Swans’ colossal Filth, a huge influence on us; that’s the teeth reference. At the same time, we thought that a beast gnashing his jaws would have been the ideal visual representation to express scorn, hate and savagery. In this regard, Tony Roberts did an astonishing job, he perfectly understood what we wanted – a truly great artist and an exquisite person to deal with too.

What are your plans for future recordings? Do you foresee vastly different albums as Legion of Andromeda progresses, or is there a small window for this project? Definitely won’t get more mellow with each album until you guys sound like Barry Manilow, right?

Don’t worry. I don’t think we’ll have a brass orchestra backing us or write a rock opera…as I said above, we aim to involve even more. The new songs we’re writing sound more punk.

No, there’s just LOA. I don’t think there will be space for more, as we want to concentrate all our energies here. Of course, we’ve been in other several projects in the past. I remember of being kicked out of many venues with my old band in Italy because we often tended to destroy the equipment, while I was stripping, forcing the audience to see my asshole and frequently jumping off stage barking at people. -M- instead, refused to sign a contract with a major Japanese label with the result of destroying his former band. You know, youth.

Does Legion of Andromeda play live? If so, do you plan to do shows soon? What sort of filth-ridden god-forsaken places will be lucky enough to host your live performances?

Yes, we have a mini tour here in Japan next April supporting the release of Iron Scorn. It’s our ultimate desire to play inside the damaged Fukushima Dai-ichi Nuclear Power Plant, but I don’t think it will be viable because the assholes at Tepco seem not very sensitive in supporting the cause of art.

In this article:interview, Legion of Andromeda 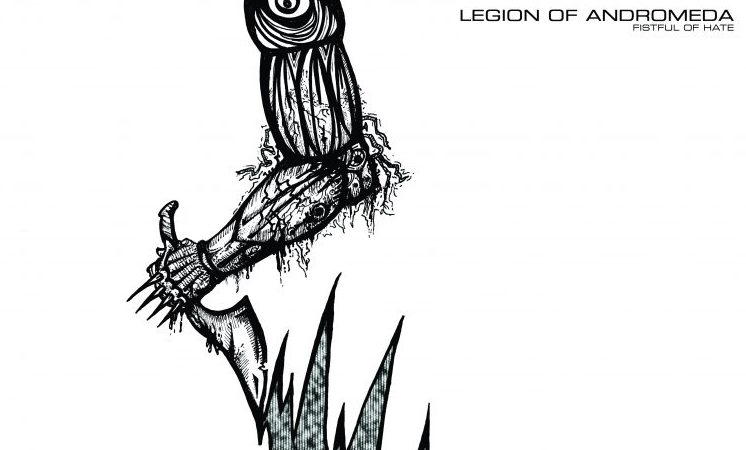 Engage with the Bestial Warlords called LEGION OF ANDROMEDA

Anyone who appreciates some ultra primitive barbaric bestial war-infused Death Metal is going to apeshit for the new release from Legion Of Andromeda. At War...