In the Mouth of Madness is a movie from 1994, straight out of the tortuous mind of John Carpenter, the man that brought you Escape From New York and They Live, but mostly known for sweet, creepy, SF like The Thing or Dark Star and big names of the horror genre such as Halloween, The Fog or Christine.

In The Mouth of Madness seems to be only known by Lovecraft amateurs and patented fans of Carpenter. It’s not aimed at an elite of some kind, but I rarely hear people talk about it when Carpenter’s work comes into a discussion. Sadly, the movie has a pitiful 47% on Rotten Tomatoes, but a nice 7.2/10 on IMDB. Before we open the discussions about the movie itself, let’s talk about those directors who tried to adapt or transcript Howard Philips Lovecraft’s work to the big screen, or as some might call it: Lovecraftian Horror. Few people tried to strictly adapt a novel or a short story from Lovecraft’s repertoire, but on the other hand, many directors were inspired by the atmosphere of the world he created. It’s the same kind of fascination with Clive Barker.

If Lovecraft is a god to some when we speak of fantastic literature, it’s far from being the same with movies. Most of them are mediocre at best, and garbage at worst, incapable of catching the beholder’s interest like a book would. It’s fairly logical though – Lovecraft’s books were written between 1910 and the mid-30’s, and I suppose that back then you would get scared by far less than what it takes to get a cringe from a teenager today. Imagination was basically the main source of one’s shivering. Just look at the best horror pictures from that era – The Cabinet of Dr.Caligari, M, Häxän – they were all based on ambiance and suggestions of horror to create fear and anxiety.

Good movies that adapted his work are rare (Dagon, The Call of Cthulhu, The Resurrected, The Dunwich Horror) but we can see inspiration in directors like Sam Raimi, Stuart Gordon and obviously Carpenter. As for other movies, here are a list of some films that might have been influenced by Cthulhu’s father: Alien (and HR Giger’s designs), The Thing, Evil Dead, sketch film Necronomicon, some episodes of Masters of Horror and more recently The Cabin in the Woods by Federico Alvarez.

Now here’s my full spoiler review of this film –if you want to watch it first, it’s at the end of the article (in poor quality, though…).

In the Mouth of Madness is one of the first horror movies that really made me uncomfortable, and legitimately scared me the first time I watched it. The story is a giant flashback told by John Trent, a detective for insurance companies who is now institutionalized in a mental hospital (he seems to have crazy hallucinations). A few months earlier, he was asked to find Sutter Cane, a popular fantasy writer that disappeared before the release of his final book and who is suspected of insurance fraud (if he doesn’t make you think of Stephen King, I don’t know who will). This writer is basically a cult all to himself, and his disappearance makes people go insane.

Trent decides to read some of Sutter Cane’s material and begins to experience strange visions, like distortions of reality, as if Cane’s work was really “changing people.” He also finds out as quickly as Sherlock Holmes that Cane might be hiding in a fictional town called Hobbs End. He then decides to go there with Linda, portrayed by Julie Carmen – Cane’s editor and also a philosopher from time to time: “It’s not real from your point of view, and right now reality shares your point of view, but what scares me about Cane’s work is what might happen if reality shared his point of view” / “a reality is just what we tell each other it is, sane and insane can easily switch places if the insane were to become the majority.”

They manage to get into the city after what I consider to be the darkest, most unsettling scene in the movie.

After realizing that they might literally be inside Sutter Cane’s last book, the insane writer reveals that The Great Old Ones are changing the course of reality through his pen. John Trent falls into madness and refuses to believe that reality is falling apart like that, and so on until he becomes the institutionalized man we saw in the beginning. I tried to stay vague so you could still enjoy the movie and be terrified of it even if you read this, but the next paragraph is going to spoil the shit out of the end of the movie…

Trent manages to escape the hospital and realizes that world population is ether crazy or just gone. He enters a movie theatre where the movie “In the Mouth of Madness” is showing, the adaptation of Cane’s last book. He sits down with popcorn and sees that what he’s been through in Hobbs End was actually the movie In the Mouth of Madness. It ends between the laughs and cries of Sam Neill realizing that reality and fiction traded places. What he thought was fiction, the apocalypse, became reality, and what he thought was real, his investigation, became fiction.

A lot of interesting theories were made about this film, from the obvious rational one saying that it’s all a John Trent dementia, to the metaphorical one with every monster being the real face of human souls (the old woman that beheads her husband, the weird thing grafted behind Cane’s head), the “all of it is promotion by the editor,” and I even saw someone talk about a critique of censorship.

The movie talks about the frontier between reality and fiction: at what point does a story become real? This question can easily be paralleled with religion and the idea of a deity –those things exist because we’ve created them and choose to believe in them. It hurts my ass to quote the Clash of Titans remake, but that was what this movie was about – gods losing powers because nobody believed in them anymore. Sutter Cane says at one point that more people believe in his books than in the Bible.

What’s interesting, though, it’s that for a good half of the movie (until everybody starts bleeding from their eyes) we don’t know what’s up, and we’re not sure of anything. Every strange event that happened was seen by one person at a time, giving us a distorted vision. On the road to Hobbs End, for example, only Linda is awake during the weird biker part and the “entering the portal” part, and she stated that she believed in Cane’s writing. How could we trust her? It’s only later that we understand what was what, like the biker who was trapped between reality and fiction in an endless loop (we see him young and then very old in the same scene).

The fact is, it was totally possible that everything was a work of the imagination, coincidences or even actors pulling a prank on John Trent just for the sake of publicity. Then came the revelation that the city existed solely because Cane imagined it, inhabitants were practically NPC with scripted actions, and John Trent probably didn’t even exist before Cane wrote him. He is the sceptic, the moral and psychological compass only because he is the main character of a book, and has to be kind of “neutral.” The first time I thought characters might be acting through a novel script was when Linda kissed John in the hotel room: nothing justified that scene, except if you were trying to sell a book with a romance.

The apocalypse of the end of the movie occurs when there are more people believing in Cane’s work than not, and that’s thanks to the movie adaptation. Those who read the books bleed from their eyes and become crazy because their brain can’t take the prediction of their own future. Trent is convinced that he has control over things and only walks to the beat of his own drum, because that’s how he was written – he was created as a character sure of himself and sure that his fate was in his own hands.

The end of the movie is a major mindfuck, because the book we’ve been chasing became the movie we were watching, and as John Trent is in the theatre he is watching the movie we’re watching (mise en abyme much?). In the end, we don’t really care for the great old ones and what they do through Cane, because even if they stand behind a creepy ass door (which looks like something off of Cronenberg’s Videodrome), they’re just here to give Cane’s messiah complex a mystical justification. And also to give kick-ass hallucinations.

This movie is the final entry of the unofficial Apocalypse Trilogy by Carpenter (next to The Thing and Prince of Darkness). Despite its quality, the movie barely made its money back (8 million budget for less than 9 million gained), and I find that really sad, but that’s just my opinion.

“Human interaction was monitored by the Inter Planetary Psychiatric Association. The body count was high, the casualties are heavy.” In this article:apocalypse trilogy, Horror, In the mouth of madness, John Carpenter, lovecraft, lovecraftian horror, sutter cane, The Great Old Ones 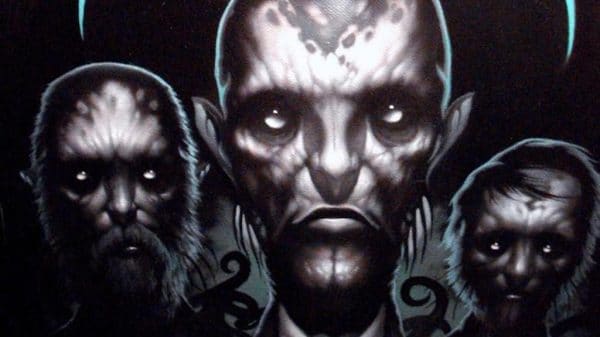