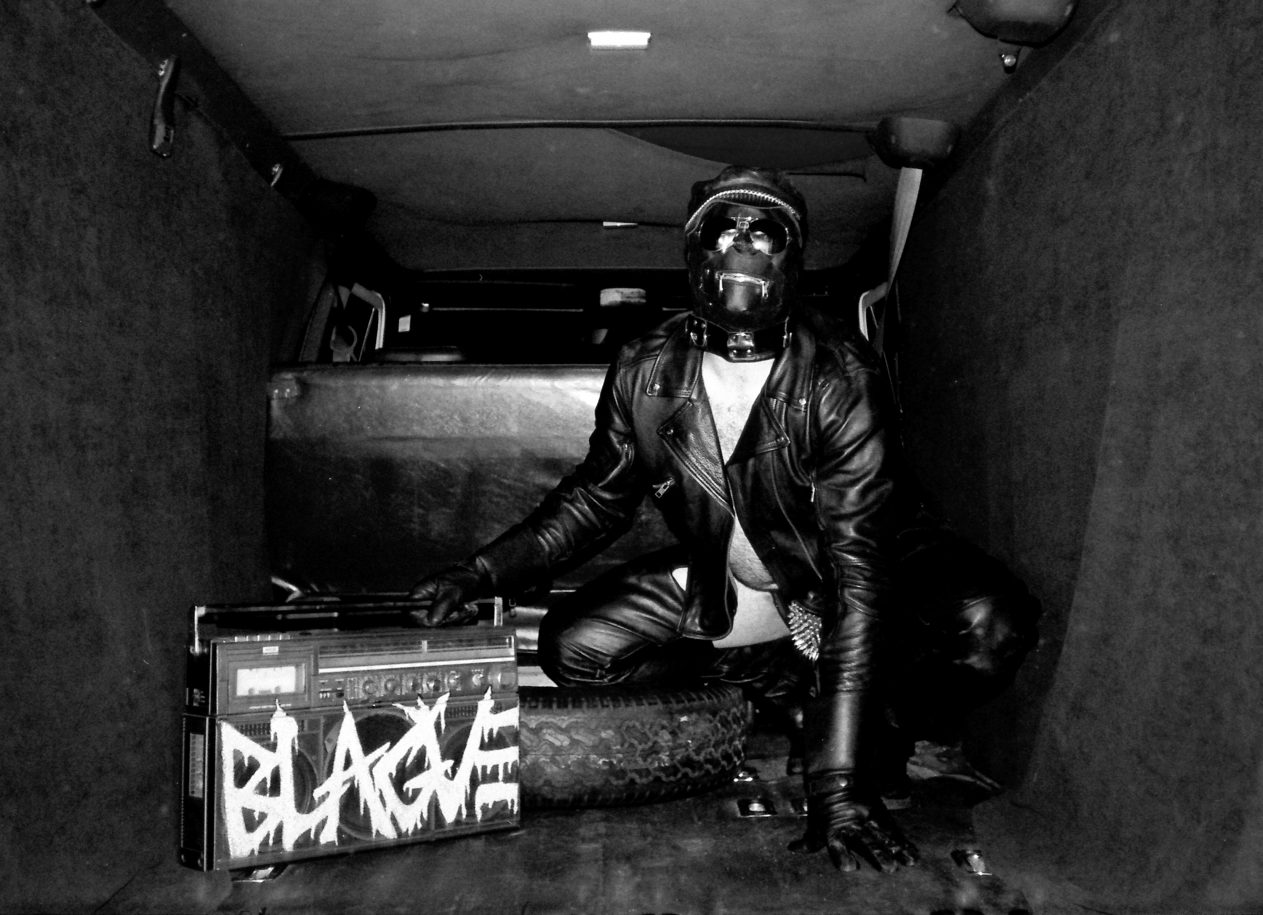 How long have you been making music under the Plack Blague moniker?

Plack Blague began as an avant garde performance based noise project on Halloween 2001 in Lincoln, Nebraska, consisting of myself (Raws) on vocals/beats/noise and Sexma Sheeen on guitar noise.  The band was a side project to our very active grindcore band, Wasteoid, and it was another way to be weird in the middle of nowhere (Nebraska).  We were heavy metal punks who partied to dance music, while headbanging to our favorite noise artists.  Plack Blague became an extension of our love for extreme music and experimental weirdo shit.  Our idea of “anti-dance” music was pure comedy to us, while having some artistic integrity to think this was a good idea.  I had been booking all sorts of underground bands and artists in Lincoln for a couple years prior to the band starting (and for the next nearly 20 years after this), and it was a great way to include myself in performing with the more “out there” artists I was booking at the time.  Mostly performing in basements or on the floor of a bar, Plack Blague live shows were rare but always a spectacle.  By 2012, Plack Blague became my full time solo project in which I started calling it a “Leather Band”.  The songwriting became way more structured and serious while the whole Gay aesthetic became much more important and even more “in your face” than ever.  Don’t get me wrong, the whole leather homoeroticism was always there, but the project became much more about that as it became more of a serious concept.  The Blague started playing shows all over the country and releasing a consistent amount of new material ever since.  It’s been a rollercoaster of excitement since taking this project full time in which I have met and shared bills with people I truly look up to, basically idols of mine. In the past few years, my partner Butch Dick has become a full time member of Blague in which he controls my sounds and light show on stage with me.  It’s been a good addition to have that extra person on stage, since being by yourself can feel a bit vulnerable.  I can play off of his attitude and his stage presence is just hot. Were you in bands before starting Blague?

I have been playing live music since I was 13 years old.  I had bands in high school that didn’t really amount to much, but the day I graduated high school in January 1999, I moved to Lincoln, Nebraska and started playing drums in the grindcore/powerviolence band Wasteoid.  We were on a mission to play the most extreme music we could think of and actually had a decent run of doing that for over 12 years.  We toured extensively and the Midwest and West Coast while also hosting LOTS of touring bands here in Lincoln, making a lot of connections in the underground that I actually still use to this day.  We made lots of friends from partying our asses off all over the country and played with a crazy amount of bands that it’s hard to believe I am still alive.  Ha!  We did an lp on Intolerant Messiah Records (ran by the singer of Agents of Satan), a split lp with Black Market Fetus on Six Weeks Records and multiple compilation tracks including one on the first “This Comp Kills Fascists” album on Relapse Records.  Plack Blague was active the whole time while Wasteoid was active, so that’s why we didn’t perform live a whole lot because Wasteoid was a busy band.  In the last 10 years, I’ve also been performing locally in my brother’s death metal band, Ezra, where I started playing bass but have been playing drums in the bands for the past 6 or 7 years. What inspired you to start Blague?

I used to joke in the band description that Plack Blague was like “Kylie Minogue meets Brainbombs“, and when the project first started, the description wasn’t that far off.  I’ve always been into dance music, noise, experimental music, punk, metal, weird performance art and the underground in general.  Ever since I was young, I have always been inspired to be different and to push boundaries in art in music.  Living in Nebraska my whole life, it’s been my goal to be weird and interesting.  I’m a sucker for gimmicks and bands that have a “look” or costume of some sort.  I love a crazy or weird live performance and the more over the top, the better.  I’m always inspired by queer culture to be myself, be different and even push the boundaries of my own culture.  Plack Blague is and will always be about being yourself, accepting weirdos, saying “Fuck You” to everything that sucks in life.

Has it been difficult to get exposure living in Lincoln?

I feel like since I have been involved in the Lincoln music scene for over 20 years now.  I have always had a good connection with local bands, venues and promoters, making it easier for me to get shows or book my own shows here.  I also made a lot of connections with touring artists from all over the world by booking shows here and going on tour with all of my bands.  I’ve always been very active in networking ever since I discovered “Book Your Own Fucking Life” in 1995.  So, because of all of that, I feel like it really helped me get exposure and easier abilities to book shows for myself in other cities.  You have to remember that Lincoln is in the center of the United States and bands are coming through this area constantly, so it’s been cool being able to open for lots of amazing touring artists out there and eventually perform with them in their cities.  I’m always pushing myself to get more exposure outside of Lincoln, and while it feels like a lot of work at times, it really hasn’t been that difficult.  People always joke about me living in or being from Nebraska, but I pay super cheap rent, making it VERY easy for me to tour and play around the country whenever I want to.  It’s always really cool to play in major cities like New York or Los Angeles and have people being blown away that “YOU’RE FROM NEBRASKA!?!”.  Lincoln has a great history of weirdo underground music and punk scenes since the late 70’s.  I’m always happy to contribute to that whole world of punk and underground music that has come out of here.  I feel like every project I have been involved with here has really impacted the music scene as being different, extreme, and interesting.

Have you done a full US tour? If so, how many times? Do you plan to do more?

While Plack Blague has performed in most major cities and small towns across the country, there has never been a proper full United States tour.  It’s mostly been one offs and weekend jaunts with 5-10 day mini tours here and there.  However, the Fall of 2018 will find Plack Blague on a full U.S. tour with ADULT., being Blague’s largest tour EVER!  We will be doing nearly 5 weeks of shows starting in Boston on September 13th and ending in Minneapolis on October 16th.  It’s been really amazing working with ADULT. so much this year and we are extremely honored and grateful to be part of their 20th Anniversary tour in support of their brand new album “This Behavior” released by Dais Records.  Earlier this year, Blague did a few midwest dates opening for ADULT. and HIDE, which led to me staying in Detroit and working on brand new music produced by Adam Lee Miller of ADULT.!  It will be great getting to share this monumental tour with them, and what I like is how well we have all gotten to know each other (this past year especially) before we get to travel in the same van for over a month!  I’m sure this tour will lead to lots more touring because that’s pretty much all we have been doing now for years.

I also had a brand new remix album come out on Phage Tapes recently.  I will also be doing a split 7″ with legendary noise act, COCK E.S.P. by the end of the year!  My album Night Trax is still available through Ormolycka Records. Have you faced any animosity as a queer musician?

Based only on the fact that I am a Queer artist, I feel like I haven’t experienced that much if any direct animosity.  Any animosity I may have received would be more from mainstream institutions such as being banned from performing at a public city sponsored event here in Lincoln, mostly for the fact that I’m shocking and considered “outsider” to mainstream society.  However as a Queer artist, I definitely have to keep myself aware of what and who I get myself involved with whether it’s booking a show, shooting a video or bands I share a bill with.  It’s always best to work with open minded individuals and also have confidence in yourself and to truly believe in your art, especially as a Queer artist.  When you’re a weirdo artist, there will always be shitty people out there trying to censor you or tell you you’re wrong whether your Queer or not.