Inter Arma is a stunning example of how a band improves through time. Their debut album Sundown was in essence a raw diamond, something that the release of their latest EP The Cavern, originally written back in 2009 (before their debut album), established in the best of ways. Suspicions were confirmed with Sky Burial, the band’s sophomore full-length, as Inter Arma evolved their sound, offering a darker, more complete vision. Sludge, post-metal, southern rock, elements of Americana, psychedelia and black metal co-existed in excellent fashion, the one aspect complimenting the other.

To follow a record like Sky Burial and a 46-minute opus like The Cavern is definitely a daunting task, but Inter Arma do not turn away from a challenge like that. Without re-inventing themselves on a large scale, they just improve on each individual element of their sound. The sludge tone that dictates the foundation of their music is as heavy and punishing as ever, with its intoxicating groove stronger this time around, and the structures present with additional complexity, closer to early (very early) Mastodon or (again, very early) Baroness – not that at any point the band simply copies the aforementioned artists, but their progressive sludge shares a similar attitude.

Coupled with a blackened infusion, Inter Arma is able to lift their dark vision to new heights. The combination of the black metal brutality and the sludge weight are enough to craft a hostile environment, switching through different modes. This blackened sense is tightly wrapped around the identity of the band, manifesting as an ethereal aura, a constant warning hovering over the heavy riffs, or in the form of full-blown assaults, with blastbeats coming down. The manner in which the band is also able to balance between dissonance and melody is one of the most important aspects of Paradise Gallows. Getting the twisted tone from the inharmonious lead parts, they are able to produce something more sinister, while the melodic element, instead of giving its inherent positive tone, instead has a more cathartic effect, granting more drive to the parts.

It is a towering endeavor, and Inter Arma is not producing simply heavy and aggressive music, but something that is more graphic. They are constructing their ideas with care, allowing them to become imposing, brilliantly manipulating the tempo, incorporating clean vocals and chants, adding an additional ritualistic tone to their work. The connection to psychedelia is quite obvious in the record, with the band never overusing the effects, but applying the right twist at the right time, attaining a darker psychedelic vibe that perfectly merges with their infernal take. The fact that there are even moments of tribal-esque quality, reminiscent of the experimental tendencies of Neurosis, sees them making use of rhythmic patterns to achieve this hypnotizing effect, with a more mystical result. On the other hand, their southern rock roots might be slightly more held back than in Sky Burial, but still add their unique flavour to this mix and beautifully go in full bloom with the closing track, “Where The Earth Meets The Sky.” Paradise Gallows depicts Inter Arma’s will to reach. This is a band that keeps working on their sound, improving the diverse aspects which are contained in their music, strengthening the cohesiveness of this hybrid state. A worthy successor of works like The Cavern and Sky Burial.

RASPBERRY BULBS is one of the most interesting and exciting bands of the past decade, and with their first new LP in just over... 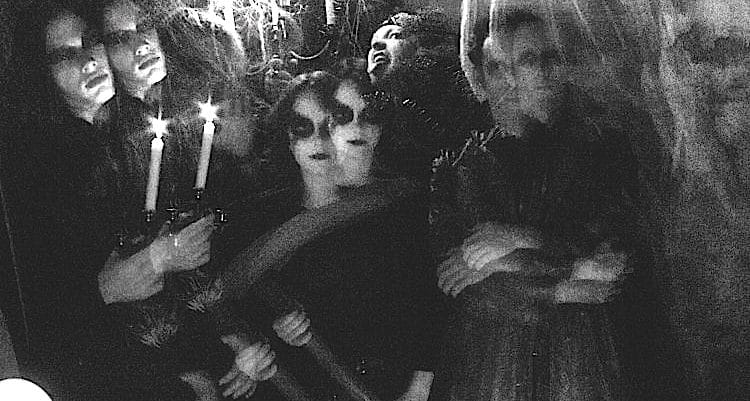 Is there a Deathrock // Black Metal crew that can fuck with DEVIL MASTER? They are the only group that can combine the chaotic cold...