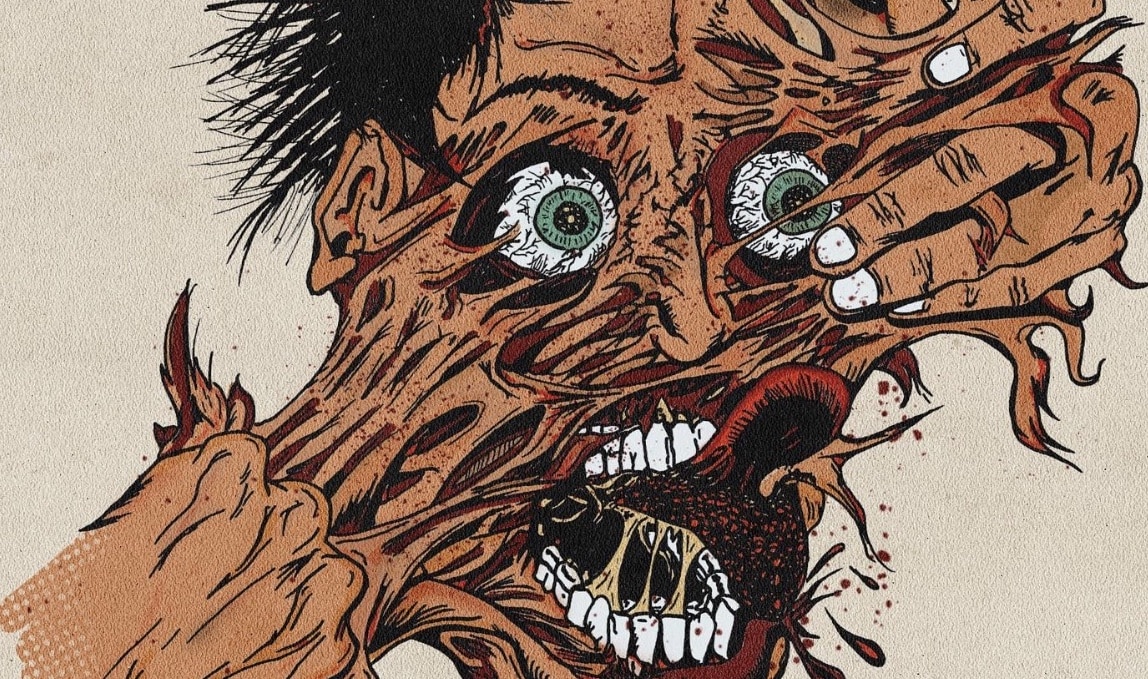 Yo, this is a very special edition of Inspiration Is The Vibration, featuring Jeff Poleon aka Fetal Brain. This human is not only a killer musician but also a killer artist! He’s also an OG CVLT Nation supporter from our L.A. days. So after all these years, it’s epic to still be able to work with him!

I started buying music for myself in the early/mid 90’s thanks to my older cooler cousins (sup Jen and Phil). Pre-internet as a middle schooler finding cool shit was sifting through 10 shitty albums to find one killer record. When you found that one sick record it was a gold mine for finding more cool music. Any band they thanked on the insert or band shirts that they were wearing would inform where my next handful of cash went. Album art like this record just jumps out at you. I remember first seeing it and knew right away I had to hear what it sounded like. Years later shit still rips and the packaging is maybe my favorite? Mark Rude on the cover, Lee Ellingson with the sickest insert and Ed Colver did the band photos — fucking legends. Honored that now in the internet age all these years later I’ve become friends with Lee via instagram, he’s even done some artwork for my current band Quarantine. Punk is sick.

This is more about Keith Morris than a specific record. Nervous Breakdown is still the best Black Flag and someone way more articulate than me has said all that needs to be said about Pettibon so I’ll stay on Keith. The formula that Keith and Greg set up for the early Black Flag stuff is something that changed the chemistry in my brain forever. Even as a teen it felt like even though I didn’t know shit about instruments or drawing I could do something similar to Black Flag. The aesthetics of the whole band were so complete and precise. It felt attainable and massive all at once. Shit still blows me away. Finding a formula and exploiting it within the limitations you set is how I approach a lot of shit in my life. I’m not a natural artist, but I have these systems down and create whatever it is I create. Not the most talented musician either, but making music and drawing within those limitations has produced some stuff that I can say I am proud of.

Circle Jerks Wild in the streets

Being in middle school and finding out that the Black Flag singer I really like was in a band called Circle Jerks was just too perfect for my idiot brain. Shit was exactly what I needed at the time — something snotty as fuck to skate to and listen to while I was pissed off. This record got me hunting for Shawn Kerri stuff. Kerri was the first punk I realized was also doing comic art which blew my mind when I saw a “CARtoon Magazine” at Queen City Comics in my hometown. The realization of a comic/punk crossover also exploded my brain. I’m super dyslexic and sucked at school so seeing that punks were into comics felt like confirmation that I was finding all the shit that I was supposed to find. That led me to Robert Crumb, Greg Irons, Frank Frazetta, Stan Lee, Steve Ditko, fuckin everyone! Thanks Keith, Thanks Shawn.

This record fucked me up as a kid. I was straight edge, loved Minor Threat and as a middle schooler outside of Buffalo, NY I thought I was cool as fuck for knowing about the band Ian played bass in. This record, more than Minor Threat, opened the flood gates for the full Discord discography for me. As a teen trying to get into punk, This record made me realize for the first time that you can just pick up instruments, push record on a tape deck you steal from the library, and call it a band. It was not as polished as Minor Threat and I fucking loved it. Cut paste album art, hardcore riffs, dog shit recording in the best possible way. I feel like back then I was surrounded by kids who liked jam bands so that track “Deadhead” really felt like it was written in reference to my middle school. “Only good dead head is one who’s dead!”

Being a teen in the 90’s, third wave ska was my shit. My first band was a straight edge ska band. It was seemingly unavoidable at the time, which was cool with me. The Specials were really the gateway into first wave, Trojan records and later: skinhead culture. Learning in 6th grade that real skinheads were anti-fascist and loved 2 tone, ska, and reggae shaped the better part of my life. Listen to Trojan records!

The Abused Loud and Clear

Perfect start to finish. Crowley can do no wrong. Just another huge influence and example of punks and hardcore kids being comic book nerds. The precision musically and drawing is still something I idolize on an almost daily basis. Everything about what Kevin does is so strong I fuckin love it. He was the first person I saw take iconic poses from superheroes and turned them into Skinheads. That kind of imagery never ceases to be fun to draw. Are you even into hardcore if you don’t fuck with comics? Captain hardcore forever.

One of my favorite bands of the 2000’s. Tara Bursey’s art on every record was so killer. Perfect package start to finish and they were always great live. Whenever I get lost in my head about how something should sound or look I try to revisit this band and their album art. The self titled art is no frills, with a stripped down use of blank background space similar to tattoo flash. They stuck to their formula throughout their whole discography.

I’ve been involved with punk shit since I was a teenager. Started my first band in 7th grade and still doing the thing. Safe to say punk/hardcore/skinhead culture has fundamentally changed my brain. Hence the handle. I wouldn’t even do art if it weren’t for my own bands needing flyers, album art, and t-shirt designs. Now I do it for other bands. Within this subculture sometimes you’re making art that feels strong, or political, and sometimes you’re just drawing something totally meaningless, violent, or just a fucked up skull because skulls are sick.

If you could give one piece of advice to a young person thinking of getting into art, what would it be?

Even if you think your art sucks, draw something every day just for yourself. Fuck the internet. Everything has been done before, so do it again your own way from your perspective but give credit where credit is due. Eat mushrooms, punch Nazis.