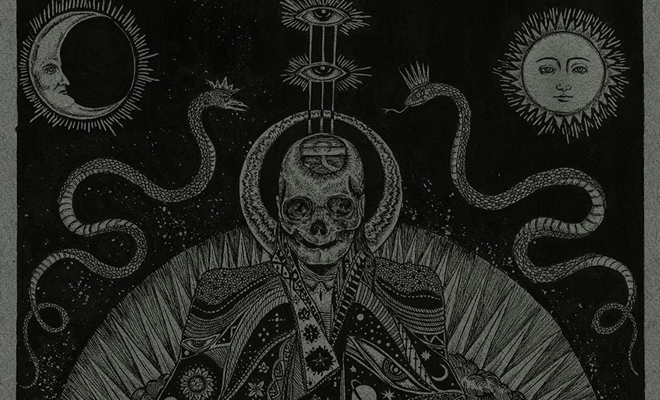 I can totally see why a band like Fórn have made such a name for themselves and seem to be on a vertical climb in the last year or so. This shit isn’t just heavy, it’s downright fucking LETHAL. Fórn is one heavy motherfucking band, but their music isn’t just sonically crushing, it is just disintegrating in the atmospheres and in the moods that it creates. This band’s music creates voids. Opens vacuums in your brain, hollows your skull out and drains your soul. It opens portals to other dimensions, allowing nothingness and complete annihilation to spill into your world, destroying it. Their comatose and slithering riffs are like massive fists pounding the earth on which you walk, making the ground shake and ripple under your feet and making your surroundings crumble into massive heaps of smoldering rubble. Every downbeat unleashes a shockwave of decibels that travels for miles, pulverizing everything in its wake. When the down strum hits your ears, your ear drums cave in, your synapses implode, and your ear canals pop. I can’t even rationally describe how fucking heavy and void-ridden this music is. It almost sounds like thunder detonating in the clouds, solidifying in massive balls of molten lead and falling to the earth lodging it self into the earth’s crust in a massive impact, pushing its way through and lifting clouds of dust and debris for miles around. But make no mistake, this shit is not only heavy and slow. Surely it is proud – integralist almost – doom metal, but of the higher craft. These guys just don’t play loud and downtuned, they also know exactly what they are doing and are exceptional songwriters and musicians. Shit can just flip on a dime in this crazy album. One second you are getting mummified in a maelstrom of mammoth riffage, and the next second you find your self gasping for air in a placid and surreal meadow of post-rock minimalism, staring in disbelief all around you as the dust settles to reveal higher and beautiful craft of sonic architecture all around. Then Fórn grab you by the throat and yank you back in their suffocating bog of lurid devastation, smacking you around like a rag doll and pulverizing your bones, one punishing blow after another. The band isn’t even scared to venture into black-metal like moments, blasting away like crazy and launching into insanely fast and destructive gallops of shredding obliteration. Bottom line, okay, this is doom, and doom can be slow and repetitive, but not here, not in the world of Fórn.

In Fórn‘s world, you must suffer in every way possible, and that is why the band has made it a point to present us with a work that shape shifts and changes colors like a fucking chameleon from hell, rupturing your existence with unpredictable savagery and turning your fucking world upside down in a matter of seconds. The dominant influence in this band’s sickening and mesmerizing aesthetic seems to be the putrid glory of sludge doom bands like Corrupted and Grief, but there’s plenty of other insanely heavy shit going on here. Some noise-doom sickness in the form of Laudanum and Whitehorse; some clean and solemn funeral doom moments, where clean guitars ring out like chants from hell; some slimy stoner-metal obliteration you would normally run into when spinning some good ole Electric Wizard and Moss; and even some blackened sludge torture you would find in the music of such bands like Indian or Coffinworm. Bottom line, this shit just plain out fucking RULES. Fórn are the shit, and this damn heavy pup they just released is already one of the year’s best doom albums, no doubts. The Departure of Consciousness drops on 12″ vinyl LP on July 22nd through Vendetta – get fucking CRUSHED!