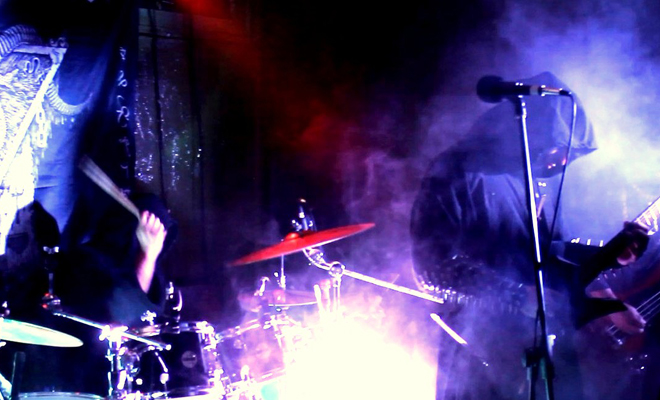 So, if you’ve either been living in a cave or enjoying Within The Ruins’ discography, you probably haven’t heard of Iron Bonehead Productions. Well, lucky for you trve fans of underground metal, Al Necro will keep you updated on the latest and greatest releases this side of the Stygian River. Featured here is Iron Bonehead’s Infernal Curse, and their release, The End Upon Us.

Enough with the pandering. This album is only four tracks long, but leave plenty an ear bloodied from the whirlwind blackened death metal onslaught. This is the aural equivalent of Satan putting down a self-help record for humanity’s heathens, complete with echoing vocal vomits and filthy guitar riffs.

The album cover is to die for. Anyone who follows the underground scene knows that cover art completes the package. Sure, bad covers aside, it comes down to the music, but when you know the music will be good, it helps to have cover art like this to make the record a worthy addition to your metal collection. The four tracks feature varying tempos. The first track pummels you with blackness and second track, “Waters of Phlegethon,” starts out at mid-tempo before turning it up. The riffs sound like human viscera is dripping from the guitar strings, and the bass is audible enough, lending the beats an added punch even as the snare drum sounds like clear skin, like that of drum maker Tama, and has an explosive sound that is distinct.

Three chord transitions make up some of the breakdowns, and the leads squeal into pandemonium, just before the tempo slows down and the snare drum punctuates the slower sections.

The vocals are heavy with effects. You’ll think you’ve had one too many a hit of LSD to go with this recording, or that the world is spinning into a black hole at a rate that’s certain to devour all life as we know it.

The End Upon Us isn’t a blastfest from start to finish. The band uses quality songwriting to make tracks catchy, albeit without sing-along choruses. FYE-shopping trendies will probably look at each other aimlessly at a listen of this, so turn up the volume and watch them run to their therapists for answers. There is an available vinyl edition, as yours truly knows because he owns one. It is highly recommended!

By the way, the last track is a Hadez cover, notable for steeping the original Hadez sound in black tar.