And here we are. It’s 2018 and Infernal Coil’s first full length Within a World Forgotten has arrived through Profound Lore Records.

Infernal Coil arrive swinging right out of the gate with the opening tracks ‘Wounds Never Close’ and ‘Continuum Cruciatus’. The haunting feedback layered in behind the chaotic drumming creates an uncomfortably eerie atmosphere. Connally’s vocals are a stark reminder that there are absolutely such things as monsters. It’s a devastating start to an extremely accessible album for death/extreme fans. ‘Crusher of the Seed’ was the first single to pop up from this record and I absolutely love the placement of this track on the record. That last riff is stupidly good. It’s so god damn heavy; a thunderous prelude into what is the absolute pinnacle of the album for me. Yes, ’49 Suns’ is my pinnacle. Straight up, I could probably write an entire review on this track alone. The feeling of disarray that sets in during the first 5 minutes of this track has my eyes darting around the frigid, dark room in which I currently dwell. It’s the soundtrack to my boat capsizing in the midst of a tumultuous storm as I fight to keep my head above the bone crushing waves. My overwhelmingly murky feelings of trepidation eventually give way to a tranquil sense of defeat as my body drifts aimlessly into the depths of unconsciousness. This song is exactly what I imagine drowning to be like. Your body floods with desperation and panic while you claw your way toward the surface; fighting for that breath of air that seems an eternity away before slowly blacking out. You drift weightlessly into a deafening silence only to be ripped apart by the leviathans that inhabit the sea – enter ‘Reflection of Waldeinsamkeit’.

This song, along with ‘Bodies Set in Ashen Death’, both come from the bands 2017 EP mentioned above. After the sound of ritualistic drumming slowly gives way, Infernal Coil picks up right where they left off: kicking teeth in with bludgeoning blast beats and low end tremolo guitars. It’s a hectic, headfirst jump back into the doom and gloom. The opening riff of the latter song really paints me a picture of an army marching their prisoners toward meeting their maker. Spoken word samples put the exclamation mark on that meeting before the execution of every last prisoner is witnessed by an arena full of cheering fans. Think Russell Crowe’s ‘Gladiator’ arena setting but with human prisoners and ‘World of Warcraft’ orcs slaughtering them all in a battle royale frenzy.

Alas, we have arrived at the grand finale of what has been one hell of a ride. The opening of ‘In Silent Vengeance’ is terrifying. The voice samples over the baleful atmosphere will make your skin crawl. It’s like being strapped to a chair in the basement of an old, decrepit insane asylum and slowly coming to – only to find someone standing over you after they’ve dismembered you limb by limb. If anyone ever ends up kidnapping me and time-lapsing my evisceration, don’t be a dick about it and at least have the decency to play this song.

I’ll admit it – the first play through of ‘Within a World Forgotten’ didn’t totally grab me. But after taking the time to sit down and truly listen to this record, I must say it’s nothing short of brilliant. It’s evocative, it’s accessible, and it’s pretty diverse. Infernal Coil have put together a pretty remarkable record. I was trying to think of how it really made me feel, and I think I have to quote my homie here: “It makes me want to find a cold, wet place to die.”

‘Within a World Forgotten’ released September 14th, 2018 through Profound Lore Records on CD, LP and digital formats. Links Below.

In this article:DEATH METAL, extreme metal, infernal coil, within a world forgotten 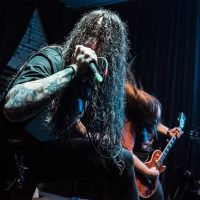