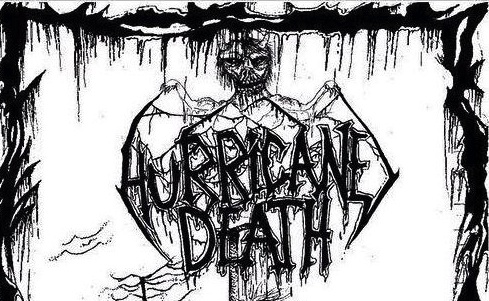 Most peeps don’t greet the early morning with some of this music. By this, I mean Hurricane Death’s first demo. Grindcore, hardcore, punk and death metal in a cage match, this demo sends the walls echoing with reverb at the end of each song. The hardcore stomp is heavy as hell, and the grind parts stop short of blasting. It’s all good, underground heathens, as this demo is sure to get the band from Brisbane, Australia some much-needed fanfare. If you’re a grindhead that’s sick of blasting and want more punk riffs and hardcore breakdowns, this shit’s got your name on it. Be your peer group’s enlightened one for a change, and quit listening to Twisted Sister. Hurricane Death are promising, and this demo is available for stream at bandcamp, where you can also order a cassette from Castigated Records.

This is anti-commercial crap divine, the blistered, moshpit-bruised brethren of the cvlt. What more to say than this record kills roadtrips by sending you headbanging while driving on the freeway like a lunatic. By the time the breakdown crushes you like you’re an ant, Hurricane Death leave you at the scene of an accident. Throw in cover art that fuckin rules, brothers, and you’ve got one bad-ass playlist for the party! The guitars are gritty as rusty razors picking thin steel strings stretched to break, and the drums kill the breakdowns with some absolutely devastating pummeling. No need for basso profundo thunder on grind albums, as you grindheads know only too well. The vocal vomits are pissed like Gary Busey throwing a fit after having been sober for a few days.

Alright, moshers, ready, get set, and go to their bandcamp page. As of press time, I’m the only guy supporting this act of God (Opus Sathanas), so show your support, cruel deities! Love this mix of elements like it’s a sausage dripping wet after soaking in some waste bucket. For the love of Satan, get a record without fucking arpeggios for once, brothers. Blast some of this in Beverly Hills, and watch the stuffed-up fuckers run all the way to the Hollywood Hills!