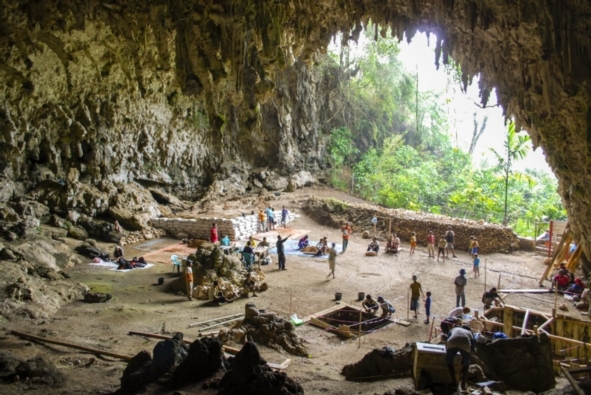 Homo floresiensis, the mysterious and diminutive species found in Indonesia in 2003, is tens of thousands of years older than originally thought—and may have been driven to extinction by modern humans.

After researchers discovered H. floresiensis, which they nicknamed the hobbit, in Liang Bua cave on the island of Flores, they concluded that its skeletal remains were as young as 11,000 years old. But later excavations that have dated more rock and sediment around the remains now suggest that hobbits were gone from the cave by 50,000 years ago, according to a study published in Nature on March 30.

That is around the time that modern humans moved through southeast Asia and Australia. “I can’t believe that it is purely coincidence, based on what else we know happens when modern humans enter a new area,” says Richard Roberts, a geochronologist at the University of Wollongong, Australia. He notes that Neanderthals vanished soon after early modern humans arrived in Europe from Africa. Roberts co-led the study with archaeologist colleague Thomas Sutikna (who also helped coordinate the 2003 dig), and Matthew Tocheri, a paleoanthropologist at Lakehead University in Thunder Bay, Canada. The first hobbit fossil, known as LB1, was found in 2003 beneath about 6 metres of dirt and rock. Its fragile bones were too precious for radiocarbon dating, so the team collected nearby charcoal, on the assumption that it had accrued at the same time as the bones. That charcoal was as young as 11,000 years old, researchers reported at the time. “Somehow these tiny people had survived on this island 30,000 years after modern humans arrived,” says Roberts. “We were scratching our heads. It couldn’t add up.”

The hobbit team has continued excavating Liang Bua—mainly in search of more hominin remains, but also to better understand the geology of the enormous cave. And the more recent excavations have indicated that the charcoal lay in a section where older sediments had eroded away and been replaced with much younger rock.

Using several methods, the team dated newly excavated rock and dirt that had accumulated in the same sediment layer as the hominin remains, and discovered that they are between 100,000 and 60,000 years old. Previously excavated stone tools, which researchers think were made by H. floresiensis, were dated to between 190,000 and 50,000 years old.

The older dates resolve the mystery of how hobbits co-existed with humans for tens of thousands of years: they didn’t. But other questions linger. Researchers have little clue about H. floresiensis’ evolutionary relationship to other ancient-human relatives, and whether they mated with humans or other species is an open question.

Roberts says that the peculiar geology of Liang Bua would have been hard to notice when the first hobbit bones were found on the final days of the 2003 field season. “Do I think we could have done a better job? Not with what we knew at the time,” he says. “We’re 10 years down the road, and we know a lot more and we’ve excavated a lot more.” Tom Higham, an archaeological scientist at the University of Oxford, UK, says that the latest dating work is compelling. “These results are tantalizingly close to the earliest evidence for modern humans in the region, which might suggest a causal link to the subsequent disappearance of H. floresiensis,” Higham adds.

Roberts, too, suspects that humans had a hand in the species’ demise, perhaps by competing for scant resources. “It’s a smoking gun for modern human interaction, but we haven’t yet found the bullet,” he says. Now the team hopes to find the remains of modern humans that may have encountered the last hobbits.