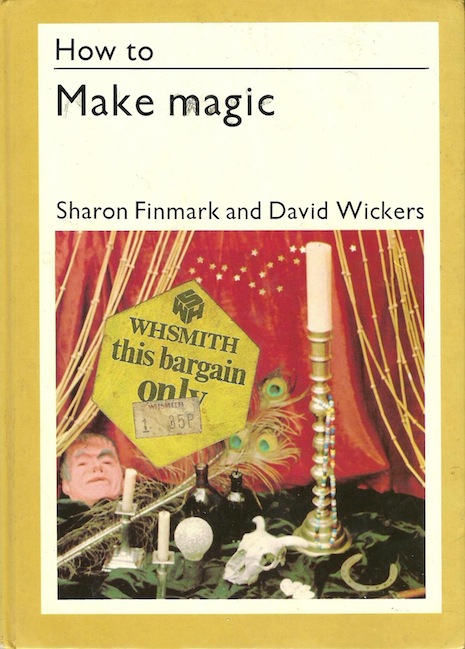 by Martin Schneider via Dangerous Minds

Blogging under the name cavalorn on LiveJournal, Adrian Bott has unearthed an absolute beaut from his childhood—a 1974 guide to the occult, written expressly for children, masquerading as a more innocuous manual on performing magic. The book was called How to Make Magic and was written by Sharon Finmark and David Wickers. It was part of a larger series of how-to books for children published by Studio Vista in the 1970s that covered a wide range; other titles included How to Make and Fly Kites, How to Build with Old Boxes, How to Make Flowery Things, How to Make Mobiles, How to Make Robots, How to Make Simple Boats. Fun for children! Who could object?

Obviously, the entire category of magic can’t help but straddle the categories of possible/impossible. That’s the whole point, isn’t it, to emulate the impossible? So to teach a child magic can always mean two things at once, to provide instruction about various sleight-of-hand maneuvers that will emulate the impossibilities of vanishing animals and so forth, or it can mean teaching a group of practices that are generally known as “black magic”: supernatural powers, ESP, divination, levitation, rituals, witchcraft… A nervous-looking tot tries his hand at divination….

Bott’s account of his childhood interactions with Finmark and Wickers’ book and of recently getting to know it again as an adult, is hilarious. He has a keen eye for the unsettling detail that gives the whole game away. As Bott points out, the friendly and innocuous-seeming cover features both a goat’s skull and a dagger—surely a sign that this book might be darker than parents realize….. As Bott writes, “The front cover of what’s supposed to be a children’s book features an altar setup that puts the likes of ‘Teen Witch’ to shame.” In the introduction, the book asks its readers, “Do you believe in magic? Perhaps you are one of those rare people gifted with real magical powers, as well as having a few baffling tricks up your sleeve” (emphasis added). Later the book suggests writing “a special chant to help create the right sort of atmosphere.” There are sections on making a magic wand, making a ouija board, and creating “ye olde magikal remedys.”

Here are a few pages from this awesome guide to the occult for children: A rare color plate from the book—a homemade ouija board Making a black cat out of paper. Nothing amiss here, until you get to that corker of a final line: “Of course this is no ordinary cat but a ‘familiar’ sent by the Devil himself to lend a helping hand.” Guide to crafting a “wiggleograph” to find ghosts Cast a spell on someone you would like to fall in love with you—yeah, a typical magic trick suitable for birthday parties…..