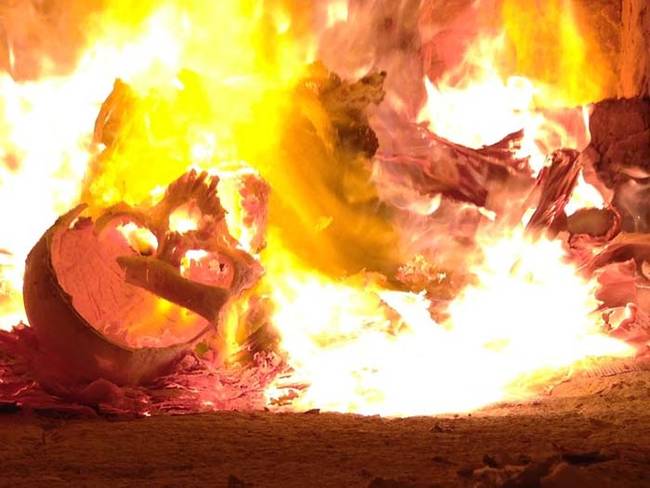 My last remaining grandma just reached her 90th year, but she began talking to me about her impending death a few years ago. She is the matriarch of our family, and an old school SJW. When I asked her what she thought about when she considered her own death, she told me, “I’m going to become a leaf, live outside in the sun and rain, and fly on the wind.” It was probably the best answer I had ever heard, and the most honest as far as what actually happens to the human body when it decomposes naturally. We break down to our most basic components, absorb into our environment and are consumed by plant and animal life. Parts of us will indeed end up nourishing a tree, becoming a part of its growth and life, before its own decay begins and the whole cycle starts again.

While death is simple in and of itself, human beings have found ways to make it a spectacle. The preservation of human bodies was practiced widely in Africa, South Asia and South America in antiquity, but the methods used were far more natural and less harmful than the toxic methods used today. For the past two centuries, chemical embalming has become the norm in funeral practices, and has put the environment and the embalmer at risk through the use of chemicals like arsenic and formaldehyde. Arsenic was a popular choice up until the early 1900s, when it fell out of favor with the rise of formaldehyde as a preservative for human flesh. Instead of preserving the bodies of only the elite of society, embalming became a routine procedure after death, causing chemicals to leach into the soils and nearby water sources of cemeteries (check out this VICE article about formaldehyde in Northern Ireland’s groundwater). As a way of avoiding the chemical route, cremation is another method for dealing with human remains, but despite the fact that it makes your corpse a lot smaller and drier, it causes immense amounts of air pollution. It looks cool though:

Once again, something our grandparents’ generation never thought would be an issue has reared its ugly head for us to deal with, so many people are looking at what has become an outdated and frankly ridiculous approach to death with skepticism. Unless you think Christ is going to raise your stinking corpse form the ground like a raptured zombie, then why would you care if your body decays at a slowed rate? It makes much more sense to let nature literally run its course and let your body break down and become a part of the ecosystem. In death, you are probably more useful to the world than you ever were in life. Why continue the destruction of the planet after your conscious has left your flesh behind? Scientific American outlines the absurdity of U.S. death rituals with the following statistics:

American funerals are responsible each year for the felling of 30 million board feet of casket wood (some of which comes from tropical hardwoods), 90,000 tons of steel, 1.6 million tons of concrete for burial vaults, and 800,000 gallons of embalming fluid. Even cremation is an environmental horror story, with the incineration process emitting many a noxious substance, including dioxin, hydrochloric acid, sulfur dioxide, and climate-changing carbon dioxide.

Inspired by my grandma’s leaf-journey, I want to look into different ways of leaving your remains to the planet over the coming weeks. There’s an industry popping up all over the world that is providing people with alternative options to the standard cremation or embalmed burial scenarios. Like so much of human “progress,” the further we come, the more we’re looking back to re-learn what our ancestors had already figured out was working. If it ain’t broke, don’t fix it.

Advertisement. Scroll to continue reading.
In this article:cremation, death, embalming, formaldehyde, how to die well