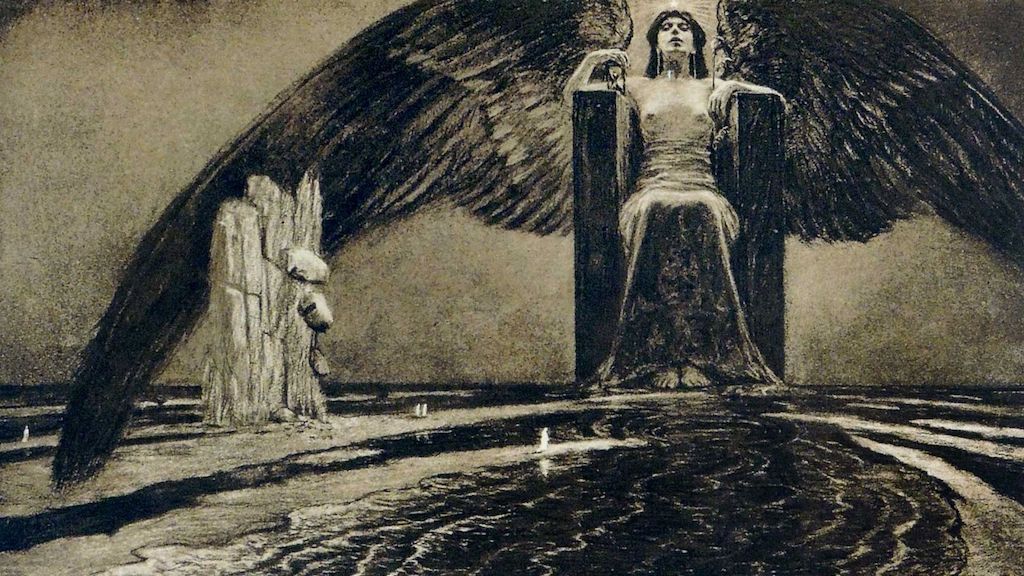 Before there were terrifying images that jumped out of a screen to scare us, horror junkies had to get their fear fix from illustrations in creepy written works by authors like Edgar Allan Poe. Think about the imagination that was possible before everything was mass produced in image form…when words produced movies in your mind and illustrations moved before your eyes. I’m old enough to remember how captivating it was to flip through the pages of a huge, leather-bound illustrated Bible my parents got as a wedding gift (?). I loved those Bible illustrations, they were more like oil paintings, and I can still see the painting of some guy looking terrified in a pit of lions. I could see the lions circling him in my mind.

So when I look at the works of Canadian artist Frederick Simpson Coburn, who illustrated a 10-volume set of Poe’s stories in 1902, I can imagine how these macabre images would have swirled and moved in the eyes of someone who’d never seen a T.V. let alone a John Carpenter film. Looking at these pictures in the light of a candle, surrounded by a thick, cold darkness, the creak of wooden floors and shuffle of rodents catching you off guard as you dive into the abyss of your most terrifying thoughts…sounds heavenly when compared to the constant neon glare of the 21st century. Try to follow the path of your dna back in time and imagine yourself there as you look through these gorgeously ghastly illustrations by F.S. Coburn…

By a route obscure and lonely,
Haunted by ill angels only,
Where an Eidolon, named NIGHT,
On a black throne reigns upright,
I have reached these lands but newly
From an ultimate dim Thule—
From a wild weird clime that lieth, sublime,
Out of SPACE—Out of TIME.