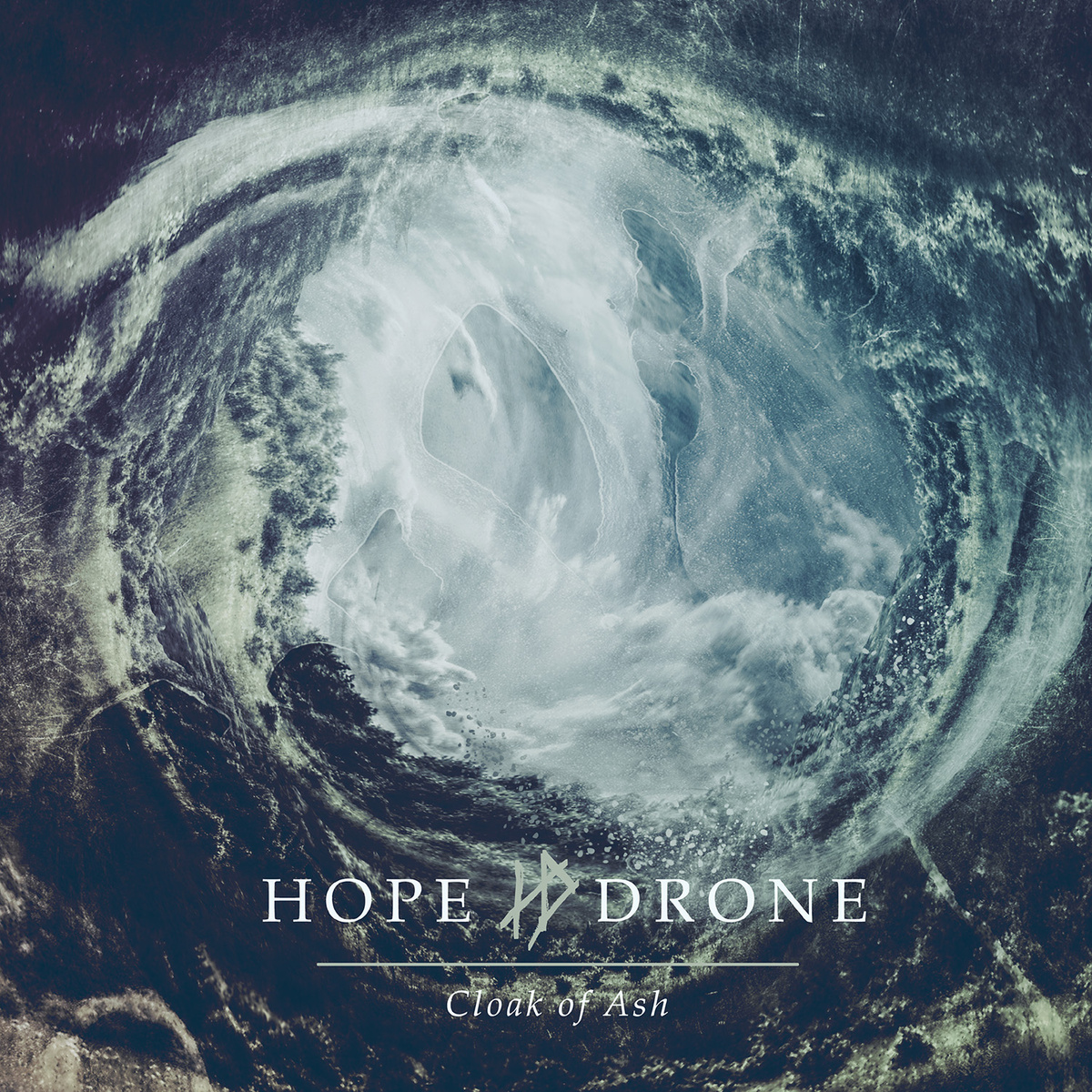 Every so often in the underground music scene, a project emerges that clocks you across the face with such force that you’re left staggered and shocked. A project that immediately demands your attention and respect as to what they can pull of with their sound. Neurosis did that to me years ago with Through Silver In Blood. Wolves In The Throne reinvented my idea and understanding of what Black Metal can be when they put out Two Hunters. Now, four young necromancers from Australia have issued forth a sonic ritual meant to bring our world a little closer into the cold, black void of space. Thanks to the infamous Relapse Records, Hope Drone have dropped their first proper full length entitled Cloak Of Ash. Hope Drone have assembled a collection of influences – from the previously mentioned Wolves In The Throne Room vast sound; to the subtle, shifting moments of beauty that Cult of Luna embodied and the noisy, Black Metal assault that is Ash Borer. Cloak of Ash is a bold display for this band. It manages to take those influences and wrap them around their own style and expression, the end result being a stunningly impressive album that had me pushing all other bands and releases aside so that I could inject their sound into every moment of my daily life.

First off, if you think that you’ll be able to dive head first into this album, you’re sorely mistaken. The opening track, “Unending Grey,” clocks in at a massive twenty minutes. That’s enough material for an EP with some bands. My initial thought upon realizing the length and placement of the track was that it was pretty ballsy of Hope Drone.  Most bands would have placed this one as a closing track; their final statement, if you will. So with it being the first track, it stands as a lengthy introduction to what Hope Drone are capable of that demands you digest it before moving forward – which isn’t that hard, considering just how damn good this one plays out. From the initial explosion of a space shuttle launching to its eventual escape of Earth into the vast unknown of far away galaxies, “Unending Grey” left me feeling a number of nuanced emotions which I thought were dead within me. I often found myself so lost within the song that I completely forgot there was so much more ahead on this album. So to say that this opening track is the tip of the iceberg – well, that’s a huge understatement.

From the second track on, Hope Drone continue to show an aptitude for bending the music to fit into this vast, otherworldly sound that they’ve created. The third track, “The World Inherited,” blasts through your ear drums as soon as the first second expires. Even as it slides into creepy guitar work torn from the pages of Cult of Luna’s playbook, Hope Drone still managed to keep my attention and curiosity as to just how far down the rabbit hole they were willing to travel in order to pull forth more of this top-shelf flavored Black Metal. “The Chords That Thrum Beneath The Earth” managed to steal the spot as my favorite song on this album, but it was a close fight between all of them, to be honest. From it’s somber opening, filled with the steady reverberation of tom drums, to the exact moment where Hope Drone arise from the blackened depths that they call home – a staggering, vicious display that builds up to a frantic, mid-song climax before submerging back into their trademark haunting guitar work, only to ascend one last time in a finale that left me throwing up my hands in utter awe of what Hope Drone are capable of. While Cloak of Ash isn’t a concept album, every song on here is sewn together to give it a vast, almost story-like quality to its feeling and depth. The album as a whole is an expeditionary force that traverses over from the highest, wind-swept summits of avant-garde Black Metal down to the utter most abysmal trenches of Drone Metal. The guitar slides used throughout this album seem to be an ode to Union of Uranus/Tragedy, as evident especially on the fifth song, “Every End Is Fated In Its Beginning.” I think anyone who has digested this album a few times would be hard-pressed not to argue that Hope Drone are pulling concepts and ideas from all over the place, and mixing them in a cauldron steeped in whatever substances they ingest in order to reach the proper plane of thought required to churn out such high caliber metal. Production and sound-wise, this album is allowed to breathe between each section and instrument. One can really tell that they paid attention to every riff, bass line, cymbal crash and vocal screech and how it related to the rest of the bands additions. No one really steals the show skill-wise and the actual mixing of the record has each part in line with the others, which should be noted is the result of working alongside Christopher Brownhill (Throes, Coffin Birth) at Wavelength Studios and Underground Audio for the recording and mixing portion, the mastering portion handled by the always capable Brad Boatright (High on Fire and Yob) at Audiosiege in Portland. I really can’t think of two other guys that could capture this band’s sound to such a degree, resulting in this album having an almost strangely aquatic feel to it in terms of the depths that the band is able to delve into. The final product is a incredibly complex record, one that I’ve been listening to non-stop over the course of the last two and half, maybe three weeks. If you know me in real life, that should really raise your eyebrow. While I’ve got my favorites, I definitely blow through a number of new projects on a weekly basis in my eternal hunt for something special. Thanks in part to CVLT Nation and Relapse Records, that hunger has been sated for the moment.

Hope Drone have displayed an absolute fearlessness in the distance that they’re willing to travel and explore within the combined effort of the music they’ve created as a group, a notion that is often lost on many projects as metal gets more watered down and saturated these days. As of late, I’ve been truly impressed with a new crop of bands that are looking to push past the entire corpse paint, insane blast beat gimmick that has grown really old. Being able to weave together so many influences from other bands without being a carbon copy is no small feat, and it’s one that Hope Drone have pulled off flawlessly. It’s rather shocking how well put together their sound and display of it comes across, only because of their relative youth in terms of existing together as a band. I’ve been fortunate enough to have reviewed some absolutely genre-bending releases this year thanks to Meghan and Sean here at CVLT Nation. While it’s only July, Hope Drone have redefined my expectations and expanded upon what I love most about Metal music in general. If you gorged upon the newest offerings by False and Vattnet Viskar, consider this a second course to what could be a very bountiful feast here in 2015. While it’s only July, when the end of the year rolls upon us, I’ll be phoning Las Vegas and putting some money down on Hope Drone stealing the thunder from a few contenders in a multitude of year end playlists. Seriously, don’t turn your back on this project or this album. It’s that fucking good.