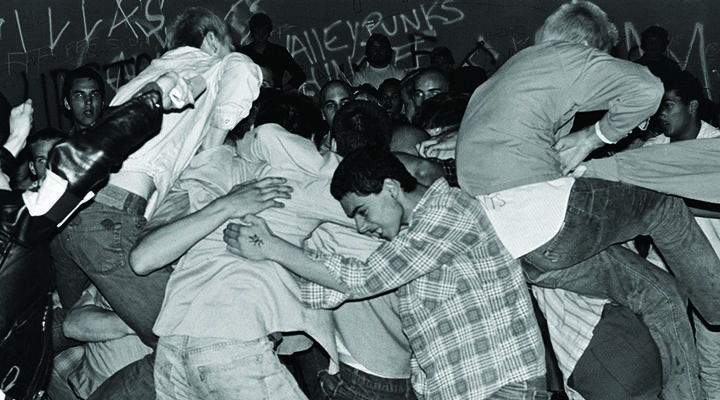 With Reagan in the White House and the economy in the toilet, early ’80s America was a warzone. Our culture reflected it: Tipper Gore and the PMRC held Congressional hearings in an attempt to get Twisted Sister, Judas Priest and W.A.S.P. to answer for their alleged sins against humanity. Satanic panic and heavy metal hysteria ruled the daytime talk shows, while “Are Your Kids Turning Punk?” campaigns warned parents about the myriad dangers of a music genre. In Los Angeles, the police were cracking skulls at punk shows, deploying riot troops and helicopters to battle the unbridled menace of mohawked teenagers slam-dancing to homegrown bands like Black Flag, Suicidal Tendencies and Fear. But behind the hysterics, there lurked an actual threat that was rarely addressed. Los Angeles punk rock gangs with names like LADS, FFF, Suicidal, Circle One and LMP roamed the Southland looking for action. Frying on acid or rolling deep in smoke-filled caravans from the L.A. ’burbs, they descended upon punk venues in Hollywood, Santa Monica and Long Beach, or wherever punk bands were playing and fights could be had. Keith Morris, former singer of both Black Flag and the Circle Jerks (and currently of the band OFF!) remembers the violence vividly. “I knew a lot of guys from the punk rock gangs, but I did not condone any of that,” he says. “There was enough negativity in what we were singing about, with the music being as volatile as it was. With people jumping around, the occasional elbow flies, a fist comes down and someone gets hit. It could turn into a bloodbath.” In the middle of that bloodbath was Frank The Shank. As a kid growing up the Los Angeles suburb of La Mirada, Frank was routinely beaten by his alcoholic father—once even landing in the hospital, where nobody asked any questions. Dad worked at a truck yard in Vernon, where the boss was noted L.A. mobster Sam Sciortino. In 1979, Frank caught a hot brainload of Black Flag, the Sex Pistols and the Germs and eventually conned his older half-cousins into taking him to his first show—the band X at the Whisky A Go Go—at age 12.

Just a few months before watching some associates stab a man to death in Hollywood, Frank joined local punk gang La Mirada Punks, or LMP for short. Founded in ’79 by Frank’s older neighbor “Santino”—himself the scion of an established Latino gang figure known as “the Godfather”—LMP spent the next several years on a stomping and stabbing spree that left many a rival punk maimed or in the morgue.

Authors Heath Mattioli and David Spacone tell Frank’s story in the recently published book Disco’s Out… Murder’s In! Spanning the years 1979 to 1985, it’s an ultraviolent tale of beatdowns, shankings and drive-by shootings fueled by drugs, cheap booze and teenage testosterone. Named after some graffiti Frank spotted in “Motel Hell,” an abandoned fleabag off of Hollywood Boulevard where punks would go to party, the book shares its moniker with a song from Suicidal Tendencies’ classic 1990 punk/thrash crossover albumLights… Camera… Revolution. It follows Frank and his cronies—hulking bruisers and hardcore criminals with names like Mad Manny, Pissed Chris and Mongo—as they fight, fuck and kill their way through the L.A. punk landscape. Snapshots from the era help illuminate the boots n’ braces milieu: photos of young thugs and sneering skinheads in bomber jackets and Doc Martens; Frank and his cronies flashing gang signs and brandishing guns. Along the way, teenage Frank snorts coke with Munsters actor Butch Patrick, slams chili dogs with funk legend Rick James at bygone Hollywood punk hangout Oki Dog and drives around L.A. in the chopped ’71 Lincoln from the 1977 Jimmy Brolin film The Car. Of course, names, dates and even streets have been changed to protect the guilty—mostly because there’s no statute of limitations on murder. “In Hollywood, we had a license to kill,” Frank says today. “We had a license to do anything. There were no cell phone cameras, no cameras at every intersection. You could commit almost any crime you wanted, get on the freeway and go home.”

It’s a weekday morning in January, and we’re sitting across from Frank in the back room of the HMS Bounty on Wilshire Boulevard in Los Angeles. Mattioli and Spacone sit beside us. All three are understandably wary of this meeting. Though the authors have done several interviews to promote their book, this is the first time Frank has agreed to speak with the press. During our email exchange to set up the meeting, Mattioli and Spacone indicated they’d be bringing a lawyer along. At some point, they decided not to. Still, the implication is that certain questions just won’t be answered. When we ask Frank if he knows what became of any of his victims, he says, “No—a lot of times not,” before Mattioli cuts him off: “I wouldn’t get too much into that.”

As of this writing, the trio says they have not been contacted by law enforcement—at least not that they can confirm. “We’ve been getting questionable friend requests through our Facebook page, and the LAPD has been known to come at you this way,” Spacone says. “Photos of sexy women with very little profile, trying to chat us up. ‘Oh, we love Frank! Where’s Mad Manny?’ So there’s people sniffing around. But we’re not gonna fall for it.” Today, Frank is 48 years old. At about 6’1” and roughly 220 pounds, he cuts an imposing figure. Wearing a scally cap, a long black coat and a Native American-style necklace made by his old drive-by partner Mad Manny, he’s almost preternaturally soft-spoken. After getting arrested for attempted murder shortly after his 18th birthday in 1985, Frank walked out of jail and left gang life forever. Today he’s the father of two sons, ages 25 and 18, and he works at a private Christian university in Southern California. All of which raises the question: Why tell his story at all? Surely he has more to lose than gain by participating in a public recounting of his criminal past.

“It’s a lost chapter of L.A.’s history,” he replies. “And like anything else, you have the good history and the bad history. You can’t not include the bad history, even though it’s something that everyone would like to forget or write off. It just had to be told.”

Read the Rest of the feature HERE!

This Feature was pinched from Playboy.