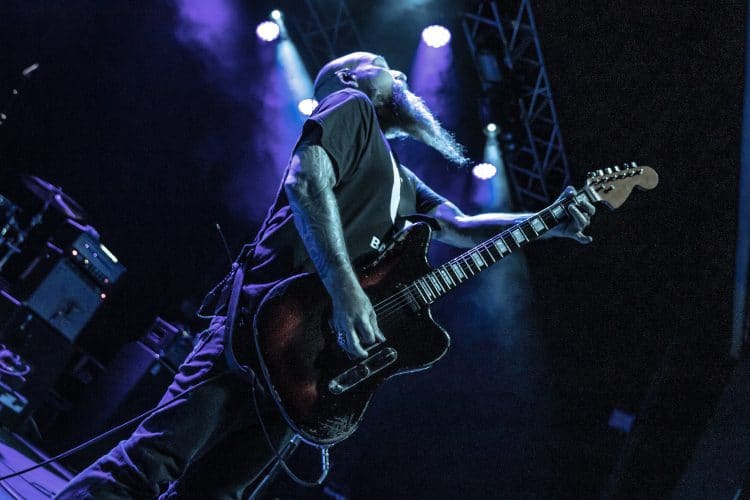 On another sweltering day in London it’s worth the sweaty ride on the tube into Kentish Town to witness what could potentially be the show of the year. With the compelling, and mind blowing, line up of YOB, GODFLESH and NEUROSIS and having previously witness ear drum decimating volume from all three bands in the past, ear plugs are checked and double checked and safely stored in a handy belt pouch.

It’s a painfully early start at 6.30pm on a Saturday, 20th July to be precise, but the Forum is already packed. It’s nice to see solid support and enthusiasm for an opening band however when the opening band is the mighty trio that is the sludgy psychedelic YOB, it comes as no great surprise. YOB have been enjoying a steady growth in attention and popularity after the release of the absolutely stunning ‘Our Raw Heart’.

Having been lucky enough to witness them a few times, it’s fair to say this is their most powerful performance so far. Perhaps it’s the grandness of the stage which they fill with three heart wrenching and beautiful songs in the form of the crushing ‘Quantum Mystic’ from 2005’s ‘The Unreal Never Lived’ just shy of eleven minutes. They sound astounding and considering the slightly muddy production on the recording, the pummelling brutality of the broken-up riffs and soaring sheer power in Scheidt’s high pitched vocals shows just how far they have come. Following on in chronological order it seems is ‘The Lie That Is Sin’ and they finish (all too soon) with ‘Our Raw Heart’ from the most recent release of 2018 and deemed on many lists to be the best of that year.

Brummy duo GODFLESH explode into life in the form of a humble duo backed up by some seriously thumping beats from a simple lonely laptop, but they are sadly lacking the awesome visuals that add an abstract bleakness. They start with 1996’s ‘Sterile Prophet’ and the hefty thunderous beats rife with special effects and are backed up by filthy chunky bass-lines from G.C Green which compliments Justin Broadrick’s politically charged roars . The vocals have a similar aggression to Max Cavalera and are sometimes layered with soft echoes. With the world burning, being ravaged and torn asunder by the psychopathic leaders of the world it would be understandable to expect a set full of anger and anguish with tones so loud they reverberate through the crowd to make it a full body experience. However, the usual brain exploding experience is actually a little toned down and perhaps it’s the venues volume regulations but it means that the powerful intense feeling GODFLESH are notorious for is somewhat lost.

With a career spanning thirty years and eleven albums, Californian quintet post/doom metal giants NEUROSIS take to the stage, opening up the set with gentle but moody build up in ‘A Sun That Never Sets.’ They continue this mellow theme with newer, quieter tracks from 2016 ‘Fire Within Fires’ and 2012 ‘Honour Found In Decay’ which are delivered with an incredible passion and a dark, menacing atmosphere. Jason Roeder pounds the drums with great ferocity and Noah Landis shakes his impressive tower of keyboards and synths, while guitarists and vocalists Scott Kelly and Steve Von Til belt out beautiful harmonies with lots of tormenting and wretched bellows over complex bass lines from Dave Edwardson. Despite all this, unfortunately, it just isn’t quite punishingly loud enough and thus in the pursuit of brutal honesty, a little hard to summarise without sounding like an elitist ass hole.

It might be a little masochistic but watching Neurosis is notoriously a slightly painful and cathartic experience even WITH ear plugs, but when these remain firmly in their pouch it is a little disappointing. In fact it’s so quiet that the audience seem to get a little restless and start talking which ruins the atmosphere even more. They finish with the heavier ‘Stones From The Sky’ which, with the intro of ringing bells and softly played hypnotic guitar shuts up a few restless audience members who have probably been waiting for this moment. ‘Given To The Rising’ has a haunting

poignancy with eerie synths and subtly barely audible vocals. The overall consensus feels like a mixed one as some of the crowd leave, raving how amazing the music was, but others confirm the lack in volume and intensity so sadly and somewhat guiltily this reviewer sits firmly in that same camp.