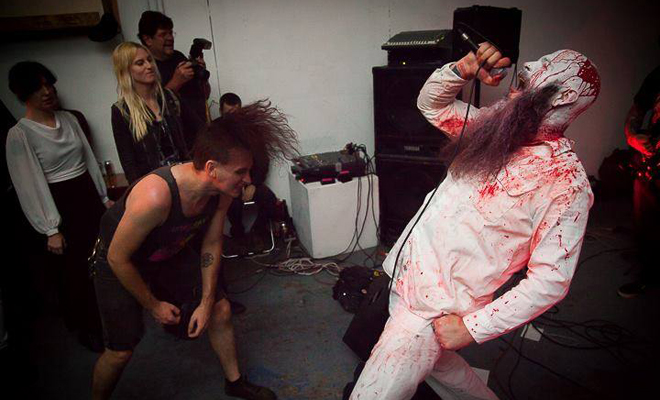 One does not tend to think of Los Angeles as a very “black metal” locale. It really is the direct opposite of isolationism, freezing temperatures, melancholy or anything that would make it appealing to misanthrope black metal stereotypes. The entire populist world has had a love affair with a mythological understanding of Los Angeles since before the okies left the dustbowl in the 30’s. As a result, the city hasn’t had to foster a distinct hotbed of ANY culture since then, because a vibrant  and thriving subculture of absolutely everything has never died. San Francisco may have dominated US metal throughout the early 80’s, Florida may have dominated US metal throughout the early 90’s, but Los Angeles had Slayer. That’s a right bower game ender if I ever heard of one.

Harassor come from LA, and definitely have a familiar swagger to how they are doing things – not that they sound like Slayer at all, but their confidence is palpable.  Harassor’s take on black metal is very raw and very punk.  Not as gnarly and raw as many current acts that intentionally aim for an abrasive tone, but beefier and more insistent than the passive ‘playing-card-in-bicycle-spokes’ drone of earlier “raw black metal” acts like Striborg.  Harassor sits comfortably in between, with decently compelling songwriting to compliment their (relatively) simplistic punk-black riffage. This is neither ‘minimalist’ two-riff black metal, nor is it lush, classically-tinged arrangements. There is a confident lack of “style-over-substance” murk to the recording quality as well. Not that murk isn’t useful or cool, but I have heard it more than once used to just mask boring arrangements or lack of ideas. The guitars bark and crackle while the vocals and drums are violently in-your-face, revealing hardcore roots to the unhinged snarl. No one is trying to hide anything behind any tricks or studio-conjured filth. Photo by Amy Darling
Harassor aren’t lacking in ideas, but occasionally something pops up that just doesn’t go all the way. Not like a whole album side or anything, just choppy songwriting or a riff that could have been… better (like this sentence). The previously mentioned confidence to their sound wins in the end and Harassor give a “trust the cook” vibe that pays off for them. I was not going to bring up that they are record store employees, but they are, and it’s revealing to know as a listener, especially one who has worked in a record store. The pitfall of being a record store worker is that you are a nerd about your profession. You got the job because you know music, and if you have any musical endeavors of your own, you will probably wind up an obsessive self-editor, because everything you write will sound like someone else’s material to you. In this case, Harassor benefit, because Into Unknown Depths sounds like nothing else that has come out this year so far. Recommended.
In this article: