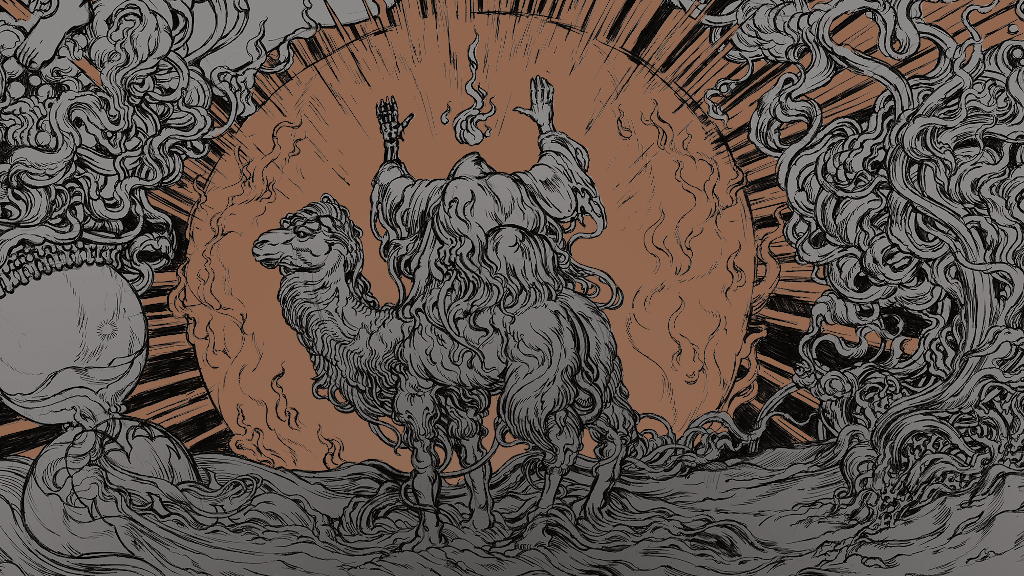 Drawing their influences from the twisted and menacing death metal of bands like Immolation, Adversarial and Dead Congregation and the majestic dissonance of black metal bands like Inquisition, Italian cosmological death metal conjurors HADIT have returned after a six-year silence with their proper debut full-length LP With Joy And Ardour Through The Incommensurable Path, a soul-crushing spell of masterful dark death metal esotericism that we’re stoked to unveil in full for the first time ever today and which will be officially released tomorrow May 7, 2021, on LP for North America and digital by Sentient Ruin (order HERE), on CD and LP for Europe by Terror from Hell Records (order HERE), and on cassette tape by Caligari Records (order HERE).

The recluse Italian death metal alchemists have been crafting their own esoteric strain of dark death metal chaos for nearly a decade now, and the genesis of their otherworldly craft is exemplified by their tenebrous 2015 sophomore EP Introspective Contemplation of the Microcosmus, which introduced the band to wider audiences with its masterful interweaving of dark and heavy as fuck dissonant death metal with cryptic esotericism from ancient monotheistic scriptures and deviant occult doctrines. Their proper debut full-length LP “With Joy And Ardour Through The Incommensurable Path”, refines and elaborates further on this juxtaposition of sounds and concept reaching its most accomplished state yet while putting even more food on the listener’s plate for their brain to consume as the listen unfolds and spirals down a dark sonic path drenched in symbolism and permeated by obscure magic and cryptic ritualistic and philosophical axioms.

The marked middle eastern and cosmological vibes thrown to the listener via the band’s logo, aesthetic, artwork, and concept should be an indicator of their underlying message: that ancient times were an uncorrupted and unfiltered basin of knowledge in which philosophy, mathematics, alchemy, astronomy, magic, and esotericism were keys not only to truth and progress but also led to mankind’s rise as creators of vast empires, studies, and prosperity, and that oncoming monotheistic doctrines introduced moral elements that hindered this growth and corrupted mankind’s quest for knowledge and truth. Submitting to the antithesis of this morale, specifically to the order of chaos (or to the order which chaos brings, or which comes with it) that is the corruptor of all monotheistic dogmas, thus brings mankind back to a state of knowledge, wisdom, and truth which has been lost and buried under the ancient sands of time and of centuries of religious obfuscation. Concepts pertaining to time, cyclicality, inevitability, the cosmos, and death as the real motivator to life thus are unearthed via this submission to the order of/from chaos, and the dark death metal of Hadit serves as the counterweight and rite of passage to this symbolism as it unleashes the primordial chaos through which mankind can be finally blessed with liberation, knowledge, and truth on its true nature and place in the universe.

The “quest” for knowledge and truth as mankind rids itself the shackles of morale and indoctrination is a wrathful and violent one, as ancient truths, forces, and symbols are liberated into the mind from their forced hibernation and resonate through the soul and body in a violent frenzy that destroys deities and doctrines from within, and Hadit’s dark and enveloping death metal is the sonic manifestation of this cathartic and turbulent liberation of the soul and mind through a suffocating chasm of dissonance and twisting, god-like otherworldly soundscapes.