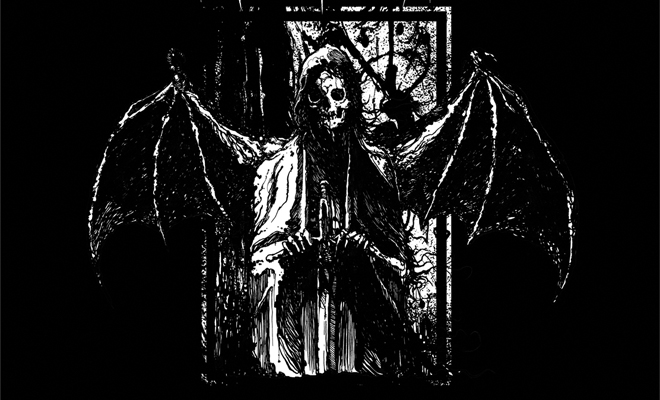 Hades Archer and Slaughtbbath are both from Chile, and they’ve joined forces in the fight against all that is good with the release of their split LP,Circus of Abominations/Antichristos Thanatos, courtesy of Iron Bonehead Productions.  If seven billion souls are bound for eternal damnation, consider how much chaos will be found in the pits of hell once these sickos play there live.

Hyperspeed riffs and blastbeats bombard the listener from almost start to finish.  Hades Archer play tremolo riffs closer to the upper frets than blackened death metallers Slaughtbbath, but are both adept at break-neck speeds. The playing is spot-on, the slower jams in between all-out blasts don’t take too long, and both bands make use of the short runtime to get the job done.  You’ll be peeling yourself off the walls after playing this record!

It’s also fun to listen to this record intently.  There’s no filler material and no wimp-out ballads.  The production is just necro enough to please the purists, while enhancing the material.  The riffs are thrashing and slightly-punk influenced.  They don’t slow down and let notes ring too often, downpicking and tremolo picking for long durations while the beats hammer them home.  I also love the sound of Slaughtbbath’s drumming, as the drum tracks sound like they were recorded in a cave a la Mayhem’s De Mysteriis.  Hades Archer’s snare drums blissfully rekindle old 80’s thrash vinyl records. The bass notes are all over the place, following the hyper fast guitar sections.  Both bands spew out vocal vomits at crucial sections in the songs.  Both bands employ the use of death metal vocals well, with enough of a rasp to hint at the classic black metal/death thrash influence.

And oh – the solos don’t disappoint.  Screeches and vibratos hint at some big-time string and whammy bar abuse.  In particular, the standout track Black Revelation of Death, ends with an insane solo that blows the roofs off.

There are no intros or outros.  There is a vocal interlude called The Ascension that only lasts 1:01.  By the time Slaughtbbath plays its first track, The Grand Dialogue, they set it up by starting slow before the blasts set in and the rapid-fire riffs become conducive to headbanging. There is a brief spoken-word vocal at the end of the record that I find suitable, and it doesn’t overstay its welcome or take up room in a separate track.

This CD storms hell after the second you hit play.  There are no doom jams or keyboard interludes.  South American black/death aficionados will grin from ear-to ear with this CD.