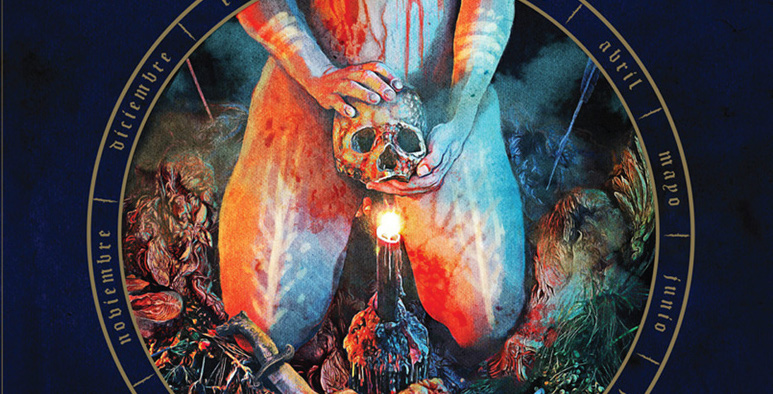 Some bands pack a punch, and then there is the rare band that is the punch. After 15 years of on and off activity, a heralded demo, and praised yet sporadic split records, Graves At Sea finally deliver us a proper full length with The Curse That Is via metal stronghold, Relapse Records. All in all, at 8 tracks and nearly 80 minutes, the fellas have opted for taking us along the scenic route on the back of their hogs.

Buy The Curse That Is HERE Commencing this mammoth album is the title track, a song that defies its length with waves of start-stop riffs, spidery (almost proggy) leads, rolling toms, and schizo vocals (it’s very easy to forget they employ a single vocalist). Both this and successive track, “Dead Eyes,” function as call-to-arms for the band. They demonstrate what Graves At Sea have been about since day one: bleak, in-the-pocket, down-and-out sludge. Thankfully, they also bring more structured songs and catchier riffs without sweetening the mood. Capping off “Dead Eyes” is an instrumental passage of deranged acoustic guitar plucking, foreboding violin, and feedback. It sounds like the closing credits to an especially grim episode of “Deadwood.”

Alex Carlson’s violin cuts magnificently throughout the album and most notably on album centerpiece and career highlight, “The Ashes Make Her Beautiful.” Somber violin atop baritone acoustic guitar gives way to an unmistakably tight Graves At Sea riff. The track’s unexpected midsection weaves new sonic cloth for the band as the amps are turned down to a hush and vast swells of violin give way to sullen, gorgeous chamber-doom. Try and imagine a sweet spot in between Eyehategod and Worm Ouroboros. The band upwardly builds into the heaviest moment of the album and song finale as cavernous pounding from the drums lead the band through a cacophonous waltz of sorts before launching back into that unmistakable riff. By the track’s last note, the realization that the band has taken you for a ride within a ride rings loud and clear.

The back half of the album features another album highlight, “The Waco 177.” The song cycles through a chorus of “Waco One-Seventy-Seven” and is an anthem of sorts about the infamous 2015 Waco shootout among motorcycle groups and Texas SWAT. The song’s got more than just a little Eyehategod pumping through its veins, but damn if it isn’t worship of the truest order. “Minimum Slave” closes out the album with 14 minutes of savage and hypnotic doom. Take one-part Grief and one-part OM and top it off with some good old fashioned Black Sabbath swing. The genre’s elder statesmen would be proud. In this article:doom, DOOM METAL, doom metal sludge metal, graves at sea, relapse, RELAPSE RECORDS, sludge, the curse that is