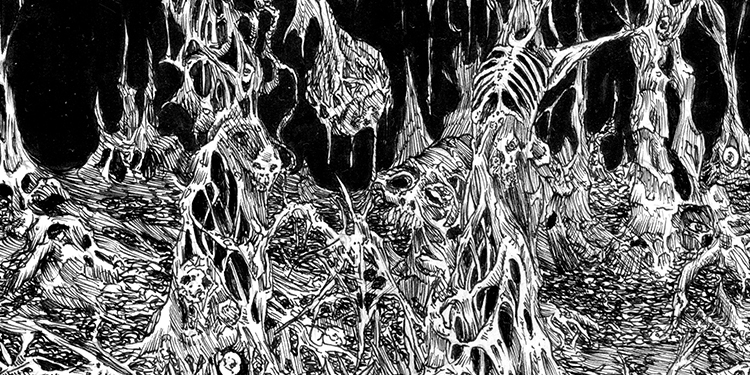 Portland’s Blood Freak have mutilated ear drums since the early aughts with five albums of gore-drenched death metal and grind. Helmed by Maniac Neil, the band has consistently built a discography of horror-themed aural violence rife with well-crafted riffs, memorable vocals, and a healthy smattering of stomach-churning samples guaranteed to raise the eyebrows of anyone sitting too close to your headphones. Now they are poised to lay waste to the landscape with their sixth album, Total Destruction of the Human Form, which has them switching up their approach a bit but also offering their strongest material to date. We caught up with Neil to get the details about the new music, his approach to lyrics, and the search for a new label. We’ve also got an exclusive premiere of a song off the new record.

Neil, as a fellow horror-junkie, I want to know about your favorites; be it movies or books. The 70’s exploitation vibe is pretty evident in the Blood Freak stuff; is that your main go-to?

Yeah, I’m mainly into the 70’s and 80’s Horror/Exploitation stuff. Some of my favorites are The Texas Chainsaw Massacre, Maniac, The Burning, Street Trash, Dawn of the Dead, Robocop, Creepshow, Videodrome, Slumber Party Massacre, I Spit on Your Grave, The Howling, Re-Animator, From Beyond, Cannibal Holocaust,  Zombi, Xtro… The list goes on forever. The first three albums were definitely inspired by those types of films. On the last three records we’ve done, I’ve tried to keep the Horror vibe but do something a little more original and weirder with the artwork and lyrics. Not so directly influenced by specific movies. Would you consider the newer material like your own horror short stories in a way?

No, not really. It’s more stream-of-thought type stuff. Lyrics have always been second to the music to me… I mean, it’s Death Metal and Grindcore. William S. Burroughs is a huge influence when it comes to the lyrical style I have. Non-linear.

Speaking of the music, tell me about song-writing and putting an album together. Do you write song-by-song, or with a full album in mind? Also, a few of your albums start with intro tracks that use synths, what I’m guessing are drum machines, and lots of samples. Is something like that (or the samples that transition between tracks) the last step for an album?

All the albums except the newest one (Total Destruction of the Human Form) were written by me. I always write songs with an album in mind. Although it would be cool to write some tracks exclusively for an EP or a split in the future. On the latest album, Kelly (guitars) and Pierce (drums) wrote some songs as well. It definitely made the album more varied in style and tone. The album intros and samples always come last. Although we tried something new this time and didn’t put any samples before any of the songs. We wanted it to be unrelenting with nothing hindering the momentum. Also it’s something new for us.

Is a decision like that organic, meaning, did Kelly and Pierce have these songs going anyway and the group decided to work with them, or was it a conscious “this time around let’s all write some tracks”?

It was definitely conscious. We wanted the whole process to be a lot more collaborative this time. A few of the songs we wrote all together which was another first. What’s on the horizon for the band this year? Any touring or recording? When can we expect the album, and from whom?

What’s on the horizon? Not to do Incantation/Blasphemy worship. Haha. Play as many shows as we can. No labels yet. Who wants it?

What are you looking for, label-wise? Is there a reason it’s not coming out on a label you’ve worked with before? Are you looking for specific formats as far as physical copies and platforms for digital release?

We’re looking for a label that will promote this new album and get it in people’s hands. That’s been an issue in the past with us. Lack of promotion to the point where fans didn’t even know we had a new album out. Our #1 goal is to get it out on vinyl and possibly CD.

Thanks for taking the time to answer these questions.

Thanks for the interview.

Cover art for Total Destruction of the Human Form: And here’s the premiere of track “Convulsions”

In this article:Blood Freak, Gore, Portland, Total Destruction of the Human Form