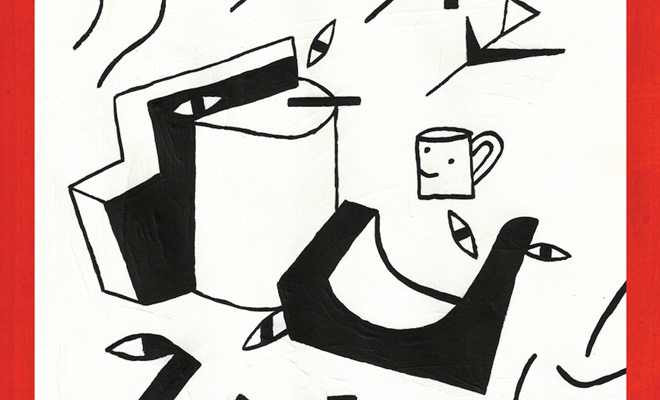 The third track, “Tomorrow’s Voices,” starts off with tribal-ish drums and a bass guitar that might have been written by Peter Hook on Closer. But Miranda’s vocals are more in line with those of Modern Eon‘s Alex Johnson than with the hollow, increasingly-baritone-as-the-band-developed sound of Ian Curtis’s. While Curtis sounded progressively detached and disaffected as Joy Division went on – and while many postpunk bands have since tried to emulate that vocal style – Miranda’s vocals feel vulnerable, fragile: more in line with those of the oft-neglected Eric Cope of Glorious Din. They’re certainly Miranda’s own, however – very distinct, earnest, pulling the listener in.

Drummer MW’s minimal percussion – only a floor tom and a snare drum – is strikingly effective. In fact, Underpass as a whole is a very minimalist, almost coldly functional, outfit. But that the songs sound as strong as they do, regardless, is a testament to the overwhelming power of the band’s songwriting (And I’m sure that Mell Dettmer [SunO)))]’s mastering of the record did not hurt, either!). Whereas many postpunk bands achieve their sound by adding layer upon layer of instrumentation and production, Underpass produces startlingly strong music with a spartan 4-piece setup. There are some echoes added onto the vocals, and there is a flanger pedal on the guitar – imparting to the guitar tones a classically gothy, watery, warbly sound, sometimes reminiscent of Robert Smith’s guitar style – and atmospheric synths and NC’s excellent bass playing round out the sound, but there’s not a surplus of instruments used on Underpass’s record.

Sonically, Underpass’s contemporary compatriots, to me, are bands like Population (Chicago) and the more recent stuff from the Spectres. Underpass are a Pacific Northwest band, and it’s true that bands like the Prids and Infidel are also making compelling dark music in this area, too. But there’s something especially captivating about Underpass: they’re at turns melancholy, nostalgic, painfully sweet, beautiful, and haunting. A “Best of 2014” shoe-in. Assimilation will be released by Desire Records on August 24, 2014. You can pre-order it here. They have a Bandcamp page here.

They also have a Digital Fanclub on Tumblr here.