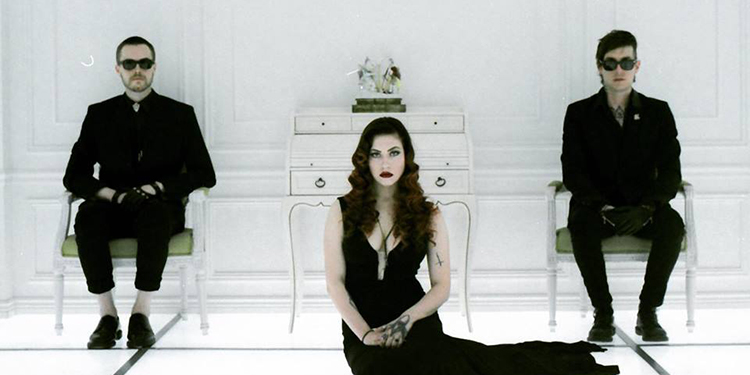 One of my favorite bands of all time, Glaare, have released their first LP and I’m so excited about it! These guys are from LA, and if you didn’t catch my first article about them, I’ll just say this: they don’t quite sound like anything else you may have heard, even if you’re a huge fan of shoegaze and postpunk, because of the unique elements they play with. They’re very fantasy oriented, sobering and slowdiving at the same time.

To Deaf And Day opens with the soft washes of “My Love Grows In Darkness,” the sad vocals coming in simultaneous with the dark post-punk guitar and beautiful 80s synth. I got chills listening to this since it’s been so long since their initial EP release and I haven’t heard anything from them since. The chorus comes in more upbeat and dancey than the rest of the song, giving it a lot of energy. Dreamy harmonization and icy tones really define this one.

“Like They Do” opens with a really fun keyboard line. I know I said this before when reviewing the Surrender/Control EP, but they remind me of a shoegaze version of The Birthday Massacre and songs like this are exactly why. You have a ton of 80s inspired elements like that sad yet uplifting post-punk guitar, beautiful female vocal harmonizations. This one feels the most fantasy inspired – it even ends with a beautiful, drawn out echo as though finishing an epic tale.

“First Rain” is the first song on To Deaf And Day that was also on the Surrender/Control EP and I gotta say, the placement on this is perfect. The song has a more structured sound to it as though bringing us back down to earth from the fever dream that is shoegaze haze. Desiree has a similar formula to “First Rain,” but it has a darker, sinister tone about it. It also has more fun synth effects I’m kind of obsessed with hearing on top of the rest of the music. My favorite song on the LP is definitely “Ruins,” which opens up with a very catchy keyboard line. The rest of the song sans vocals come in at once, giving it a more driving, almost rock sound. Her reverberating vocals have a serious and dramatic attitude which pairs so well with everything else. “Ruins” ends by fading into an echo, followed by a cool ending guitar solo jamming as we enter the next song tantalizingly.

The rest of the album (“Isky,” “Suffer,” “Surrender/Control,” and bonus track “Sidmuli”) are all songs originally on the EP, so feel free to read more in depth about those songs in my previous article if you like. “Isky” always stuck out in my head more clearly than the other tracks because of the crazy synths, and I’m really happy they placed it right after “Ruins” because it almost feels like that’s the alarm dividing the old from the new.

The vinyl isn’t out until late December, but I sprung to buy it right away. Not only will I finally get to hear these magical songs on my 1977 record player, it’s sure to be a gorgeous piece of art and it’s limited to only 500 copies. Make sure to follow these guys on Bandcamp, Spotify, and Facebook because their releases should never be missed!