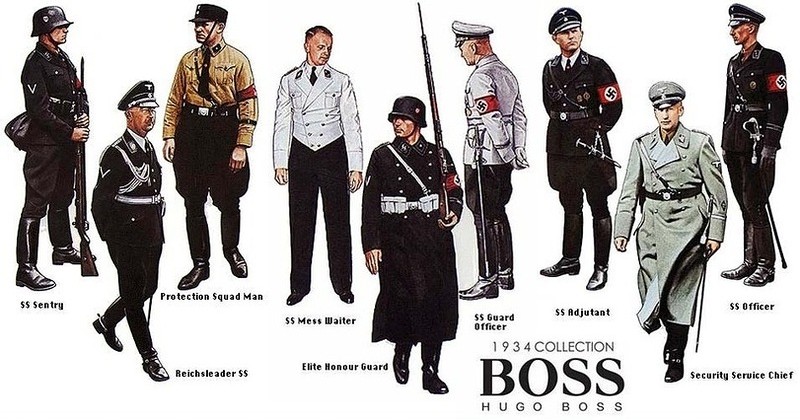 The NAZIS were well dressed murders who wanted to do away with the mentally chanelleged, homosexuals, people of color & Jews. They were all about exterminating those that did not fit into what they thought was the “ideal” race. It’s a trip how many corporations, ones that still make millions today, got their start by being a part of this notorious fucked up racist regime. One of them being the very well respected fashion icon, Hugo Boss, who created many of the uniforms for the Nazi Party. Actually, Hugo Boss himself joined the National Socialist Party in 1931, which led to him getting the contracts to make the uniforms for these small-minded racist assholes! I wonder what his company would have become if he did not enslave over 140 workers during World War II? I find it interesting that people like him and Coco Chanel worked together with the Nazis, but still have so much respect amongst the rich elite, and the poor masses, of today. Also, I can’t understand how many people in the underground scene think it’s cool to take on the aesthetic of these fascists pigs. These same people should try walking around in KKK robes in South Central L.A. so they can get the shit beat out of them. Dressing like a Nazi is just really insentive and dumb on so many different levels. Anyway, check out the Hugo Boss Nazi Collection and documentary right here and now. Also peep this list of 11 corporations that did business with Hitler, and still have economic influence over the world today!