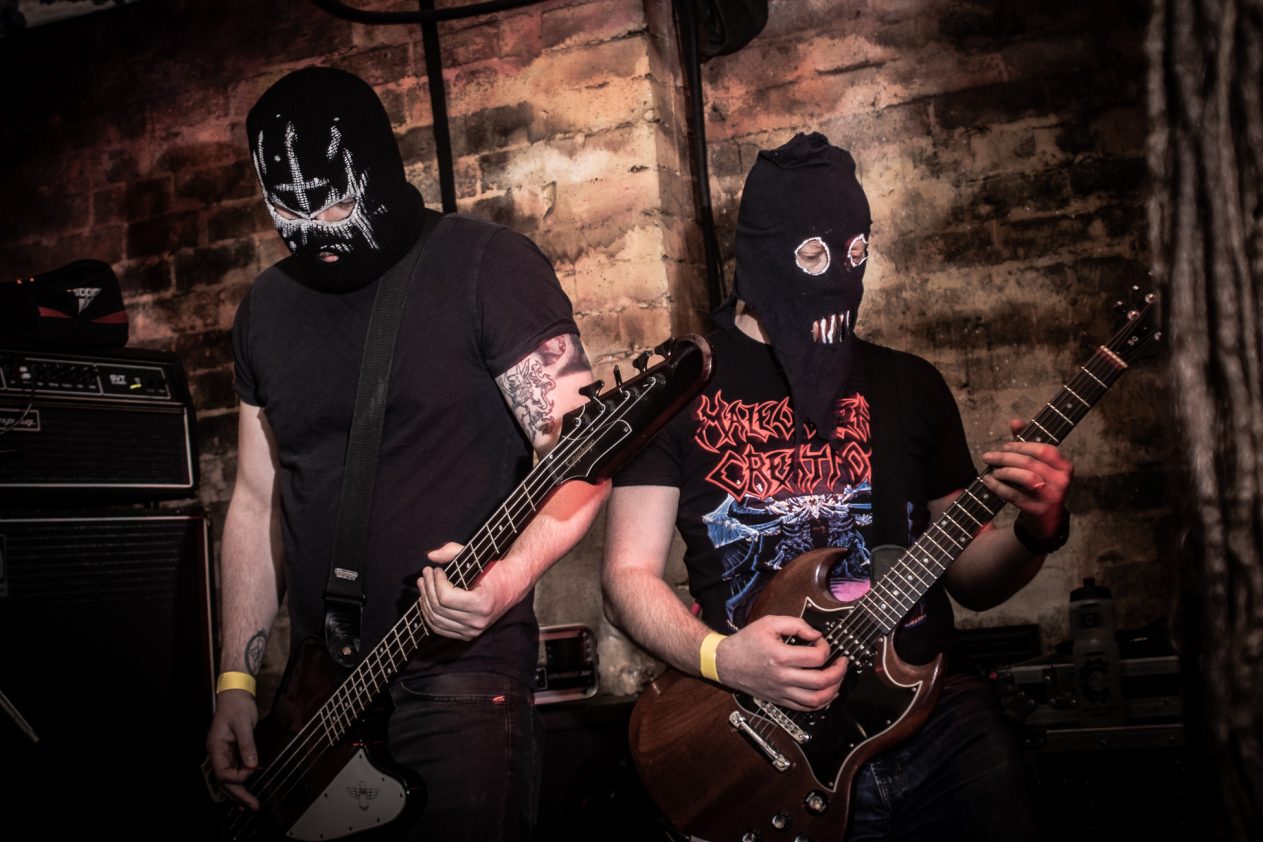 So, it’s safe to say that 80% of Dreadfestians (including yours truly) are feeling a little worse for wear after two days of Buckfast fuelled grind; then who’s to blame. Luckily today, the holy Sabbath is a little more tame than the carnage of yesterdays antics, forgetting of course that it will come to a chaotic close with FUKPIG headlining.

First up are newly formed TWAT from North London and hotly anticipated straight from the horses mouth as the worst band of the weekend, and, well, they weren’t wrong! The sounds emitted from these masked horrors is something akin to a drowning cat and a garbage disposal, unless you like your “music” in vomit form with a hint of sludgy Britney Spears then avoid like the bubonic plague.

Up next on the main stage are WALLOWING, a disgusting quintet from Brighton with a nice thick slab of miserable and cathartic sludgy noise. The dual face-melting vocals from Mark Green and Zak also of HERD MOVER are particularly disgusting, layered over a whole myriad of experimental chaos, merciless powerful drumming under unapologetically discordant riffs and a pummelling bass line.


SKINLOVER a trio from Lincoln bring yet another helping of power-violence to the Meat Locker, but it has a blackened crusty and sometimes punky edge which makes for an interesting stand out feature. They are fast and furious then suddenly slow, sludgy and intense; constantly toying with tempo to make for a chaotic and intense set


Next up are Welsh trio TIDES OF SULFUR, another well named band who really conjure the feel of the music in the name itself. They play a tight set blasting out a mix of sludge and blackened crust to ride the waves of thick and fast then slow and heavy which drown the main stage in a putrid quagmire.


Back in the Meat locker is NEGATIVE THOUGHT PROCESS another trio from the London/Reading area. These guys are for sure one to watch with a relatively new drummer Jordan Allard. They are shaping up nicely and come across as more abrasive than ever with their sweet serving of grinding power-violence. With dreadlocks flying, Allard pounds the skins like a man possessed. While guitarist and bassist Danny Page and Kyle Townsend belt out angry as fuck, fuelled with hatred, shrieks and growls, and the lively crowd get annihilated.

KUROKUMA are another band that seem to be on track to great things and are absolutely devastating in the best way possible, they drag the awe-struck main stage through a murky mire of sludgy blackened crust. Unrelenting chugging bass and discordant techy drums which at times reach primitive levels and at other times are trippy and psychedelic. The strong concentration on percussion use, including cowbell and rattle, adds an interesting edge to an already epically detailed plethora of noise which is delivered with a crushing intense precision. Starting with simple percussion and doom riffs they develop the set to epic proportions of devastation which propels the main room into a frenzy of furious air punching and head thrashing which become more feverish with each next crushing slab of sludgy greatness.


Il, a trio from Russia bring the dirty fuzziness of ELECTRIC WIZARD mixed with vile twisted vocals reminiscent of the intense anger of RWAKE or PRIMITIVE MAN. Tortured howls and snarls contrast against funereal slowly crashing drums which slowly increase in speed alongside chugging riffs. It’s a dirty but delicious slow and heavy mix of crushing doom which speeds up into blackened crust with hints of drone and psychedelia. Top stuff.


Next up are SLOTH HAMMER in the form of yet more masked reprobates, five in total and featuring members of AFTERNOON GENTLEMEN and GETS WORSE. There is a lot of talk about these guys going on before actually witnessing them decimate the dimly lit Meat Locker with what can only be described as a hellish racket of improvised experimental noise. They claim a “cabaret of despair” and well, ladies and germs that’s the best way to describe it.


It’s reached that point where pretty much everyone probably just wants to crawl into the void for at least a week but the sextet FUKPIG manage to summon those last dregs of energy out of the broken bodies of the crowd. A pretty insane moshpit erupts for the last total decimation of the main stage. Heavily and bitterly political but with a comical edge, FUKPIG are basically just pure chaos, churning up a horrific concoction of death, blackened grind and crust with an element of hardcore. Strangely the first example that comes to mind is the unholy birthing of a horror that might come from the unlikely conjugation of CONVERGE and CRADLE OF FILTH and fed a filthy diet of crusty milk and vitamin D-beat. The highlight is when a maniacally grinning audience member gets body slammed on to the stage during the only quiet bit of the whole set, then flings themselves back into the swarm of churning limbs. It’s a pretty damn climactic close to an absolute blinder of a weekend; one which is sure to be in the diary for (hopefully) many years to come! ALL HAIL DREADFEST!