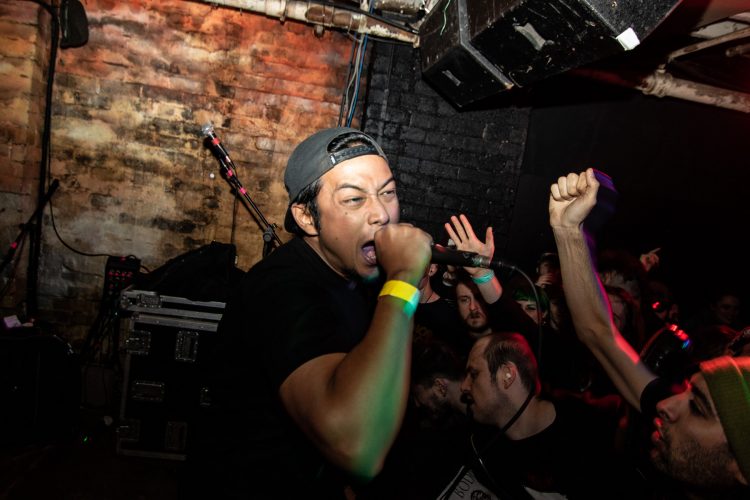 It’s my first year attending and Dreadfest now in its third year has been growing in popularity and calibre since the beginning and this years line up including headliners WORMROT, ROTTEN SOUND and FUKPIG and with the addition of a third stage is proof of that success. Set in arguably the best DIY venue in the UK, The Temple of Boom in Leeds. Showcasing an array of the best grind, doom, sludge and hardcore the UK has to offer and having sold out in a matter of weeks due to its relatively humble size it’s set to be a pretty spectacular affair and so hopes at this stage are pretty high. Dear reader were these high expectations met? Read on to find out!…..

First band of the day are local Leeds quintet CATTLE who are squeezed on to the intimate looking (to fit two drummers with big kits and another three almost hidden members anyway) main stage. It’s a chaotic set of tightly performed experimental and at times cacophonic noise. The placement of the two very talented drummers facing each other off right at the front of the stage makes for an intense experience. They start off fairly psychedelic, almost bordering on art rock style with plenty of pedal effects and echoey shouty vocals but descending into a loose feel of controlled but tortured chaos. It could be the double drums, psychedelic feel or sludginess that reminds me of a more experimental Kylesa.

After CATTLE it’s a quick pinball dash over to the Meat Locker stage to catch the almost ironically named HUMAN LEATHER of Brighton/London. They are just getting better and seem to often be on the road forever gaining new fans. Tonight, they are the best I’ve seen them, a simple duo of bass and drums but by no means making simple noise. Vocalist and bassist Aimee belts out very unladylike gnarly political and feminist shouts, even throwing in some death growls replete with the best possible facial expressions. She hammers out some killer technical and experimental basslines as the cherry on this very tasty cake. Backed up with hefty drumming from Tom, they play fast and relentless but also occasionally slow down to a “MELVINSy” crawl. Basically (but by no means basic) think BIG BUSINESS on speed.

Back over on the main stage after a five-year hiatus are South East London power-violence outfit JOHNXMCCLANE, and they whip up the packed main room into a frenzied pit with a mixture of short, sharp blast beats and d-beat sludgy goodness.

Badass female doom trio from Nottingham, DARK MOTHER are up next in the Meat Locker and have a pleasing fuzzed out “Wizardy” vibe with a tinge of riot grrrl. Raspy howling vocals from Holly who also plays some sweet fuzzy guitar riffs are reminiscent of the grungy greats with a drawn-out witchy feel set against a heavy backbone of sludgy bass from BISMUTH’s own Tanya Byrne and slow crashing drums. It’s perhaps nothing overly new but still a gratefully received offering of doom.

Apologies for missing out on SICK OF STUPIDITY over on the main stage as there wasn’t a lot of time to grab a bevvy and some fresh air before some more power-violence in the shape of DROVES from Glasgow, fronted by an escaped mental patient she-demon banshee, apparently with shrieking vocal chords to match! Short sharp and sick punky fast as fuck power-violence.

Back to the main stage for Edinburgh lads, quartet ENDLESS SWARM who spew out sickeningly discordant and harsh grinding power-violence. Judging by the audience’s reaction these guys are so aptly named, the antics of singer Graham Caldwell rolling around on the stage and hurling himself into the crowd summoned up a swirling mass of limbs, grind fingers and manically grinning faces. I myself managed to hop up on stage after the contents of my bag spilled unceremoniously all over the floor along with my knees and camera making good friends with the stage monitors. But the bruises and potentially cracked lenses were totally worth it.

Again, due to a much needed breather it’s apologies to GEWOON FUCKING RAGGEN. It’s finally time for what this rabid champing at the bit the packed out crowd have been waiting for. The apprehension in the air is thick as grind legends WORMROT take to the stage. Hailing all the way from Singapore, vocalist Arif begins in a humbling prayer pose which created a slightly sombre effect before the room erupted into (and I’m not entirely sure how it’s possible) an even more relentless and hideous swarm of seemingly angry but, actually, ecstatically happy bees.

Blending classic grindcore, fast as hell guitar licks and insane screeching grunting vocals with some punky d-beat riffs and mind blowing drumming; a seemingly never-ending corrosive storm with wave after wave of crushing abrasiveness so intense it’s hard to catch a breath between each blistering song, of which there seem to be many, including never ending encores as the insatiable crowd simply will not let them go. The room gets so hot there is a dense cloud of humidity in the air and my lenses start steaming up. To avoid myself and my camera being completely annihilated I had a great vantage point to watch the mayhem ensue and the sheer manic delight on the audiences faces as they watched their grind idols destroy the stage as the first headliners of Dreadfest. Crowd surfers pile into each other and even yours truly decided to ditch the breakables on stage and fling herself into the swarming abyss. It was fucking perfect!