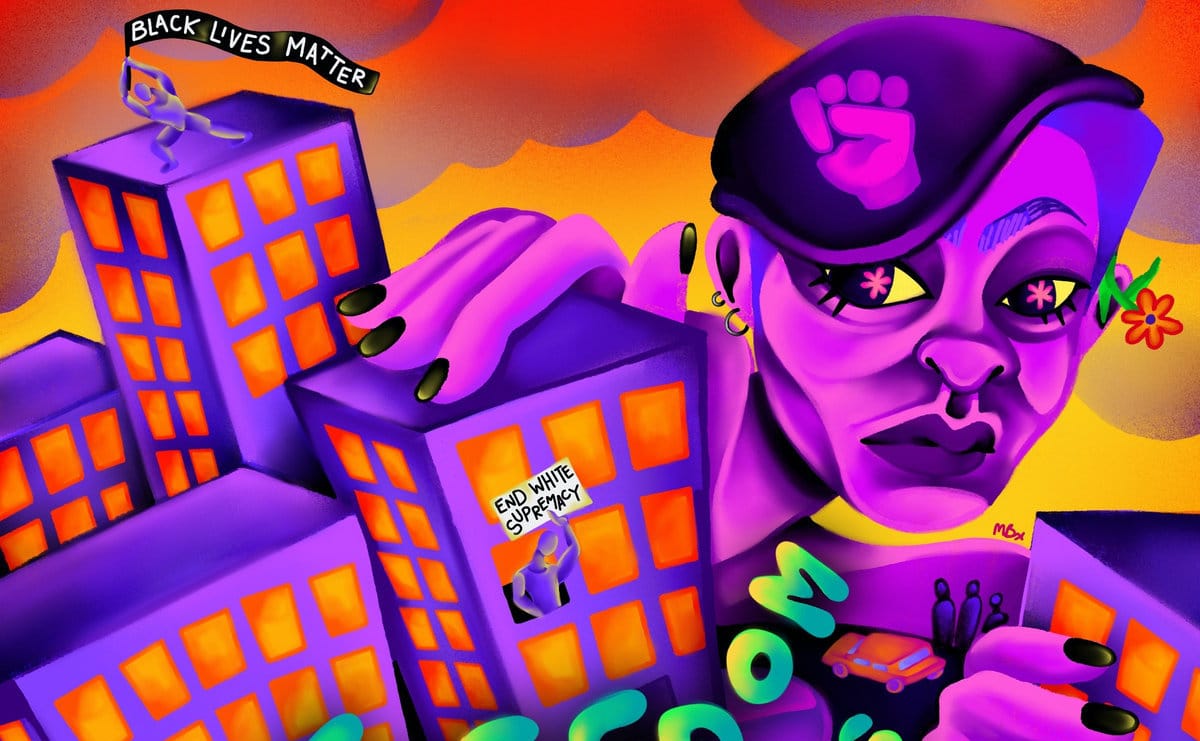 What are your views on state-sanctioned addiction in the Black and Brown communities in America? Do y’all see how alcohol and drugs are used as a tool of social control against our communities in particular?

I definitely do see it as a form of social control, and we see its origins within American Imperialism as it was choosing to pump drugs into our cities to arm militants as a puppet militia in South America. Then we see the state’s unwillingness to truly treat our people by continuing a diabolical practice of for-profit health care that truly revamped the drug epidemic. I think it’s also the duty of our community to get with harm reduction practices, cause the state will not intervene and we need to as always do the work to liberate our neighbors from unhealthy relationships with substances.

Tell us about three books that had a major impact on your worldview, and why?

I can’t say I am the heaviest reader out there but some books that have really stuck with me are:

Reading about the evolution of one of the most integral revolutionaries in our time about the struggle they had and continue to go through for the liberation of our people was beautiful. Plus the poems that we chant in the streets.

(not a book but an article) From allies to comrades by the Liberation School:

Abolition Democracy: Beyond Empire, Prisons, and Torture by Angela Davis:

This was really the first Black radical text I ever read and merely learning about the concept of abolition, themes around Imperialism, and Black Radical Feminism really changed my ideas of what it means to fight for Black liberation.

How old were you when you first realized that the police weren’t looking to serve or protect you, but instead they were an occupying force in your hood?

I didn’t grow up in the Hood, let’s set the record straight lol — never once said I was from the hood, I very much grew up in a whyt ass town. I was somewhat late to understanding the harm of police, it really wasn’t until 2013, after the death of Trayvon Martin and the start of Black Lives Matter, where I began to learn what the police truly were, and how they are the foot soldiers of the ruling class that only serves to exploit and exterminate us. Then I really learned about their interactions in the hood, and how they are not any different than US troops occupying Afghanistan for 20 years. Cops are the foreign occupants that control the actions of the hood, so they are the true occupying power.

Did y’all grow up in households that encouraged community activism?

Not at all. They didn’t exactly support it, but definitely were not the driving force behind my feeling of wanting to actively participate in the movement.

If Move BHC could develop their own curriculum for the Boston School District that focused on Our-story and not His-story, what kind of classes would you include and why?

A Decolonized Study of Indigenous People and Nations: we literally learn the very white-washed history of native people, and it would be incredible to learn directly from natives in our public education.

The Study of Black Radical Feminism: Black radical feminism paints the greatest picture of freedom of all Black people, assuring that the most marginalized people have their liberation. It will address our patriarchy,  misogynoir, homophobia, and transphobia.

The Study of Pan-Africanism: Not that fake ass Dr. Umar shit, we talking the real Kwame Nkrumah PC shit and All-African People’s Revolutionary Party to understand that we are not liberated until all African people are liberated globally.

The Study of Marxism/Leninism: Capitalism is what we are indoctrinated into, and the primary source of oppression we face as Black people.

The study of Black Joy: We forget that Black joy is a necessity in the revolution, and we should always study the struggle as well as the W’s!!!

The Study of Music: It is ever so empowering for all that we do in this world.

Move BHC’s creative vision shows a strong sense of self. What experiences helped to shape your lyrical and musical direction?

Being Black and having political education is really what has shaped the identity of the band. Musically, Nick (Guitarist and main music writer on The Demo and EP) just wrote songs that made people want to pit, and that’s really how we critique the music is “Does this make us want to mosh? Does this make us want to do something weird?” So yeah, Blackness, political education, and moshing are what really form the identity of Move.

I’ve been in between therapists for a grip, so really, working out, riding my bike, skating, music, and to be honest, collectively struggling with others has been really helpful.

“Beyond Reform,” because I don’t want prisons or the pigs to exist by 2060, so hopefully it will be a story of the past.

“Freedom Dreams” because I hope that our Freedom Dreams will be realized by 2060 and the song can help us reflect on the process.

“Righteous Unrest” because it’s my favorite song, and I hope that tenacity won’t be needed but still felt by the people of tomorrow.

What was the moment when you knew that Move BHC was going to be a band? Why the name Move BHC?

The moment was on April 25, 2019, when Nick Hochmuth (Guitarist/main songwriter) DM’d me some demos he’s been sitting on for a bit. The jams immediately made me want to pit, and he asked if I wanted to be on the mic and I replied “I’m sold.” Then we found our drummer Devon Austrie, our trio recorded and put out The Demo. Little time after that we got Andrew Crumby on Lead, and Jake Maclean on bass.

I’ve always loved simplistic names for bands, names that almost “hide in plain sight” like Candy, Korn (haha candy corn), Bane, Gulch, etc. I wanted to stay in that ethos, I wanted a name that would depict what I want you to do when listening or watching the band and I literally want people to move.

Then something that is innately tied to Blackness, and the M.O.V.E. Org is a critical moment in Black history. It’s the reason why we explicitly ask our names to be represented as “Move” or “Move BHC” — we are not co-opting the original M.O.V.E Org. Did a quick google search and couldn’t find any hardcore/metal bands that went by Move and didn’t come across any, and then BOOM, band was named.

What does the word UNITY mean to Move BHC, and what does it mean to the Black liberation Struggle?

When I think of the word “UNITY” as it’s thrown around in hardcore, it’s nearly a hollow statement that is a feel-good saying but lacks much action behind the word. This is why you don’t really see us posting or speaking about “Unity” within the scene. As a band, I want to see more acts of solidarity, and that’s what we speak on. They are synonyms, but unity is passive almost, and solidarity is active.

Now when I hear or read the idea of unity and its relation to the Black liberation struggle, I always think of it in the ways of pan-Africanism, and its necessity in our fight for revolution. To clarify, I am speaking about Pan-Africanism spoken about by W.E.B DuBois and Dr. Kwane Nkrumah, the unification of all African (Black) peoples in the fight for our own sovereignty under a scientific socialist revolutionary government. That is the type of unity that is a necessity in this struggle for freedom.

Your music is beyond uplifting for Black People. What does Black Joy look like and sound like to y’all?

Yeah, the only intersection I see is the Racial capitalism and colonial rule that literally has perpetuated each and every single one of those hardships that have impacted our community since the very idea of us being stolen from our land. There is only one solution, and that is a Pan-Africanist revolution to smash the white supremacist capitalist imperial empire that is the USA.

Do y’all see food apartheid happening in the hoods of Boston?

What does the creative process of a Move BHC song look like? What comes first, the lyrics or the music?

For The Demo and Freedom Dreams, the music was way before the lyrics. Both times Nick would demo out the songs, which makes understanding the idea of it way better. The dude is a drummer by trade, so he will really flush out a whole song idea with riffs and computerized drums then send it to the band. We usually give him our critiques and he makes the edits, then we will usually jam it live and see what happens. We also get a lot of help from Charlie Abend, who Mixed and Engineered both our releases. Then comes the lyrics, I usually write down a lot of one-liners or ideas and then sit down with my big homie Chanel (Wisdom & War), who is a master lyricist and we really hash out the flow and words.

Damn, this is hard especially since I am not the biggest hip-hop connoisseur…in no particular order, No Name, Nas, Wu-Tang Clan (I don’t care if that’s cheating), Kendrick, Ms. Lauryn Hill.

How did y’all link up with Triple B?

A few months after putting out The Demo, Sam just hit us up and asked if we were writing any new music and if we wanted to put it out on Triple B, which I thought was wild cause we had never played a show due to the pandemic. It was a no-brainer though, putting out a 7” on the illustrious BBB!

East Coast run with @Move_BHC and @BugginHC is coming up mad soon, tickets for some of the shows are in the bio

For real do not sleep on it pic.twitter.com/pbD3UH5GKv

When will we hear a Move BHC full length?

We just wanna play more than one show and make sure we got our shit together live and then we will think about a full length (as of filling out these questions, we have officially played one show).

Y’all have any shout-outs for Black or Brown businesses that are making an impact in your community?

As much as I love Black business, I always want to plug in Black Abolitionist and Revolutionary organizations in Boston and beyond that are doing the necessary work to get us free:

Families for Justice as Healing

Not in Boston but people need to tap in:

The Black Alliance for Peace