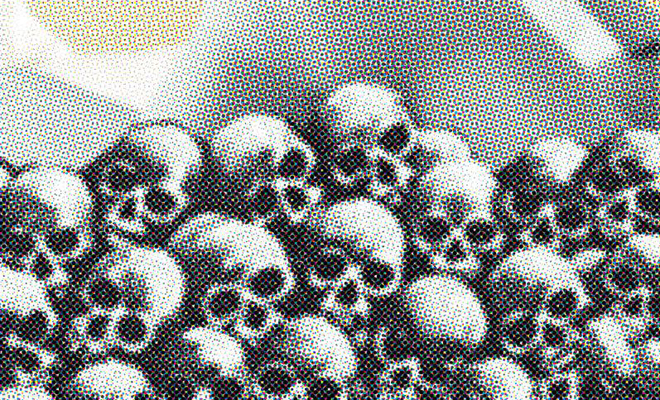 Fragment King is a band I had little to no familiarity with going into this, and I honestly think that was a boon to my overall listening experience. With no preconceived notions of the band, it was much easier to confront the subtle brand of chaos that Fragment King offers. Angel Position is really a great example of why you should never form an opinion of a release until after multiple listens; I’ve listened to this album all the way through about three times now and have found some new nuance to marvel over each time.

Upon first attempting to learn more about the band behind this release, I was both impressed yet unsurprised to learn that it was a one-man project. The nasty noises you hear are courtesy of Mark Kammerbauer, and the band has a been around a suprisingly long amount of time, considering this is the first time I am listening to them (I will definitely be checking out their back catalouge after this experience). Fragment King’s (or fk as they are also known) sound is best described as dark avant-industrial. Godflesh and Navicon Torture Technologies are listed as influences, and their marks are apparent. If you are looking for a more recent comparison, think of a more freeform/minimalist version of Mike IX’s Corrections House. Similar to all of the aforementioned bands, they create a smothering atmosphere of discontent and agitation. This album will either piss you off or disturb you, depending on whether you agree with what Mark is shouting at you or not. Either way you feel after listening, you’ll be enriched for it. This is a damn good album.

The perfect word to describe this album is simmering. Fragment King is angry and discontent; disgusted. However, not so angry as to shout it directly at you. His hatred and disgust summer just below the surface, barely controlled. The blackened, noisy guitars and synth textures are buzzing and humming, threatening to erupt at any moment into full blown chaos. But it never does, which is a very good thing for this album. It immerses you in the humming feedback of his malcontent, forcing you to feel what he does without pushing you over the edge. It incites rather than excites, pushing the aggression onto you and forcing you to rage on your own, rather than doing it for you.

The aforementioned buzzing, almost-too-distorted-to-be-discernible guitar is a big part of creating this mood. In combination with the nasty synth textures and noisy soundscapes, it absolutely smothers you. The vocals also add to this feeling, barely cutting through the haze, and heavily distorted themselves. Every grungy, affected shout of ‘You… Mean nothing… To me!’ only serves to further accentuate how displeased this guy is. If the vocals were more varied or frequent, they might serve to distract from the overlying feeling of the album. But they are kept sparse and simple, and serve their purpose perfectly. Cutting through the hissing, popping and rumbling noise that comprises the meat of this album is the machine-based, synthy percussion. The percussion provides a bit of direction and structure in the dark haze, giving the listener a current to swim frantically along with so that they don’t get lost in the black sea of misanthropy. The percussion might be the deal breaker for a few would-be fans. At times, the industrial, house-like synth beats seem almost out of place amidst the humming darkness. The insistent, synthy beats can also get a bit repetitive, as in the latter half of the longest song on the album, ‘Constellations’. On the reverse side of that coin, the repetitive nature of the percussive force and can also serve to drive the point home, as in the short, staticy bursts present through out the title track.

The album is also masterfully paced and ordered. I really feel as though albums such as these should be taken as a whole, as the feeling crafted by one track builds as the album progresses. It is a journey. You don’t just look at one corner of a painting when appreciating art, and I feel the same way about music such as this. It is an experience, a package deal. The album opens with a slightly calmer (but by no means calm) track in ‘Mobilize,’ and then the visceral, biomechanical discontent continues to flow and pulse throughout the rest of the album, until finally reaching a crescendo and then dripping and oozing away in the much more subdued, but no less disturbing and noisey, ‘Kingdom’. You also get the bonus of a remix of one of the best tracks on the album, ‘Nullifier’. The remix is predictably much more industrial than any other song on the album. It doesn’t really fit the sound profile of the rest of the album as well as the original, but it is a remix, so I don’t really count that against it. Taken by itself it is a fine song, but definitely remove yourself from the dissatisfied anger of the rest of the album before you listen to it.

If I were forced to single out a track, I would say that my favorite one is ‘The Squealing of the Pigs’. This track perfectly encapsulates all of the best things about this album and delivers in every way you expect it to, and in a few that you do not. But that seems to be the story of this album. Put on a pair of headphones and listen to the whole album in one go. Then do it again. Then fight the urge to go throw a brick through the establishment’s window.

Out now on MHz