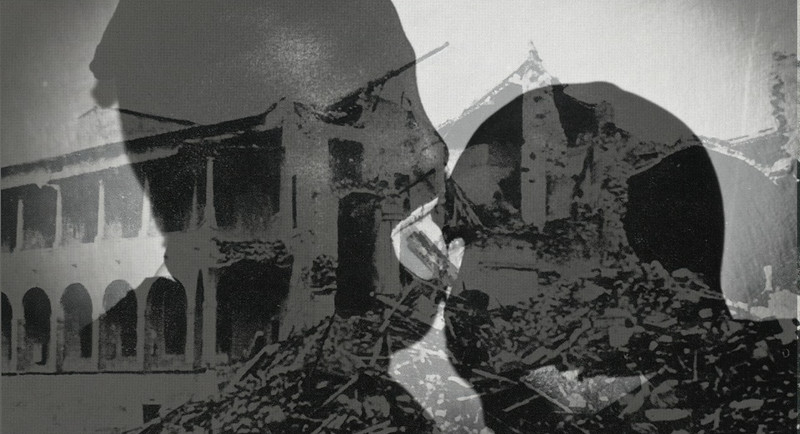 In the last Screams from the Gutter chapter dedicated to Italian bands I told you how one of those bands called HATE & MERDA had an imminent release coming out. So, that release finally came out, and holy fucking shit, it fucking rips shit up in unimaginable ways. In fact, it rips shit apart so much that I thought it would be necessary to go back and talk about this and, and now that they have an LP out and available to listen to and purchase, do them justice and present them to humans, because if the premises set forth by the band were already incredible, trust me, the final product is way far beyond what your sorry brains and and dinky bones will be able to withstand.

So, HATE & MERDA…. Hate and shit. It’s hard to even describe the filth, hate and fucking destruction unleashed by this sociopath duo in their debut album titled L’anno dell’odio (“the year of hate). This album takes Iron Monkey, Buzzov-en, Eyehategod, Corrupted, mid career Neurosis,  Today Is The Day, Grief and Thorr’s Hammer and makes them all crash and collide in a smoldering ball of boiling and rupturing filth. The duo is comprised of Unnecessary1 and Unnecessary2, unnamed and masked musicians who play drums and guitars only, and holy crap, these two Italian sociopath villains, even in such an outnumbered and reduced member capacity, are able to bash their instruments into a torturing submission. They unleash fireball upon fireball upon fireball of molten filth with scary ease and aim it straight at the listener’s face using their music like the deadliest of weapons, as if they are shoving your head into a vat of molten basalt and making your head melt away while you are still alive and breathing. The band isn’t only about filth and hate though, these guys are skilled musicians who know how to play shit the right way and create moody and sorrowful soundscapes on top of their staple mammoth and downtuned hateful riffage. Some eerie moments, recall Corrupted in their minimalist and spoken words moments, some other recall the post-rocking skull-bashing of early Isis, and some other bring back to mind  some of the most puzzling and psychedelic moments of Minsk. Overall this album is a towering sludge opus, a work that takes sludge metal way fucking beyond, into a completely uncharted territory. L’anno dell’odio literally rips you apart and it does it with taste, style and great class. Out now on as limited run of hand numbered 12″ LPs through the labels Toten Schwan Records, Dio))) Drone and UTU Conspiracy.