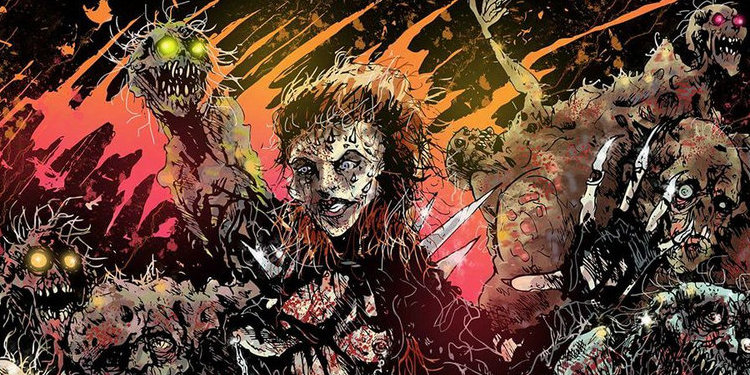 East Coast gore grind powerhouse Organ Trail have been on a devastating path since their inception in 2013.  Bridging the gap both geographically for the dedicated members of their newest and official lineup (spanning over 3 state lines), and for a genre that gets muddied down with one trick ponies.  Their latest episode, the self released A Gross Misuse of Anatomy, has been received in high regard from fans of the brutal underground cess pool, hailing positive review and acclaim.  Accenting technical ferocity, unrelenting speed, classic sampling and harrowing vocal depictions Organ Trail have carved their own niche in the world of gore grind.  From the moment the record starts you know that you’re being escorted along an excursion of debauchery and filth. Opening samples and winding guitar tones almost facilitate the transcendence.  Stand out tracks for me include “I Cum Slugs” – I’m a huge fan of gang vocals and hearing them utilized in brutal music is tight as a belt! “Cysts of Fury” – the sampling in the intro is incredible, letting loose into a pummelling groove sure to garner contact in the pit.  “Release the Drilldo” – need I say more!?  They’ve also included a gem of a cover track on here too, sure to tickle the fancy of all fans of gore infused metal.

Organ Trail have 5 offerings of audible devastation spanning their 5 year existence, including a split with Richmond, VA natives Vomit Stain.  I first became aware of their monstrous sound when my friend and long time supporter of the Virginia Death Metal scene, Matt Dorsey did a guest spot on that split recording, and ultimately started filling in on the vocal duties for tours.  As Matt’s presence became solidified within the group, the Organ Trail name started to pop up all over the Eastern Seaboard on seemingly larger bills.  The band have begun to steamroll every venue and they will embark on a 5 day outing in the Southeast coast of the U.S. with Blacksburg Virginia heavyweights Pathogenesis later this month. Discuss how the band was started, and the musical background of the people involved. Where did you all come from and how did you get here?

Tim: I started Organ Trail as a one man bedroom project in 2013. My previous band was winding down and I wanted to pursue something that was more stylistic and thematic to my personal taste than my prior project. Some local musicians showed interest in joining and I really wanted to play shows again so we formed the first full line up in early 2014. We ended up with a few member changes through the years with people moving on or not being able to meet the requirements of a traveling/recording band. Matt, who had did a guest spot on our recently released Immoral Spawn split, and Eddie, who was a long time friend from elementary school, both filled in for a tour when we were mid drummer search and our then vocalists could not make it. After the tour Eddie decided to stay on and shortly after our vocalist was no longer with us and Matt joined as a permanent member. That was 2016 and that has been the core of the band since.
Obviously there are some geographic difficulties within the group, spanning over several states. What drives you to trudge through it and make it work?
Tim:  Overall our drives aren’t that bad. Myself and Berto are both in Pennsylvania, only about 30 minutes away. Eddie lives in WV but since we are both near a major highway he’s only 45 minutes away. The three of us do a weekly practice. The drive between the rest of us and Matt is a 4 and a half hour drive that usually ends up being 5 and a half. For me personally its worth any inconvenience to jam with these guys. Everyone works so hard and we accomplish more than i have ever been able to in another band. Our personalities align so well too, and that is super important.
Matt: I was aware of Organ Trail from pretty early on and was always into what they were doing. Tim and I are really on the same page musically and are both massively inspired by a ton of the same bands. So, once macerated was winding down and I was looking for another full time gig, it was a no- brainer when the vocal spot opened up. I’ve spent my life traveling and moving from state to state, so the 4-5 hour distance between us isn’t that big of a deal. Explain the writing process as well, due to the mileage between members.
Tim: We have found a formula that works great for us. I write and record a song with programmed drums, occasionally getting feedback along the way to help shape the structure. Then I pass it on to Eddie, Matt, and Berto, giving Eddie an additional click and guitar only track to practice to. Eddie rounds out the song with better fills and tweaks some beats. The next practice we play it together and iron out any kinks or anything that didn’t translate well from the demo version and if we change anything major we usually take a video for Matt so he has a reference till the demo track is updated. Matt then practices to demo songs and sends us videos so we can hear what he has written. We have a shared dropbox folder with new songs, videos, tabs, and samples that we all have access to. Most importantly we all work our asses off on our own time. That lets us often come together and nail songs our first time playing them together. On our first practice meet up for the first tour we did together I was blown away because we were a group of people who had never played together and we were able to play an entire set.
Matt: Technology, as well as all of us being able to work on our own stuff individually, are both huge assets in this long distance relationship. I still keep the old practice spot down here in Va Beach to blast Tims rough tracks through the PA and write to. Plus, we always have a place to play when the dudes happen to be in town. All of Tim’s hard work on recording the initial meat and bones of the songs, is a huge thing and the main reason I am able to make this work.
Who is most likely to use a blow up doll or similar item? On the road or at home.
Tim: Well…We tend to do things as a group, so…..
Matt: Her name is Jenny and she’s seen better days. We travel pretty frequently.
How has ‘A Gross Misuse..’ been received by the underground?
Tim:  Seems mostly positive. We haven’t gotten an overwhelming response from it, but the few reviews that we have found had good things to say and compared us to a lot of our favorite bands. We have found it on a ton of pirating sites and peer sharing networks. I guess if people care enough to steal it than it was a successful endeavor. I think it has opened up some doors for us on the booking front.
Matt: It’s definitely the most pirated material I’ve ever been a part of. Which I am totally fine with. I’ve had people steal merch from my old band, right off the merch table, which really impressed me more than anything. Yeah, I agree with Tim, if someone wants our shit bad enough to steal it, more power to them. What can we expect from 2018 and beyond? New recordings, tour and so forth?
Tim:  We are currently working on recording new material to be divided up for two splits. One with VHS of Thunder Bay Canada and Goremonger from Illinois. The rest of the material will be used for an unannounced split with another band. We have a 5 day run with our friends in Pathogenesis at the end of February, and a Pennsylvania/Maryland weekender at the end of April. Hopefully another tour at the end of the year and plenty of one offs.
Matt: It’s really flattering to be receiving the offers we’ve been getting. There’s talks about hitting Canada later in the year, as well as the west coast eventually. I’m also super pumped for everyone to hear these new songs we started tracking. Our fastest, most grind-y material to date.
Hidden agenda in the lyrical content? Political message or straight forward brutality?
Matt: Before I joined the band and even in the very beginning of my tenure, Tim wrote all the lyrics. For the most part he drew from his encyclopedic knowledge and a library of super obscure horror movies, that for the most part I’ve never heard of. I dig the genre, but what I know about it can fit into a thimble. I wrote insanely ridiculous gore filled, murderous lyrics for 9 years in Macerated, so the transition to Organ Trail was pretty easy. I tend to draw from real life horrors and put my own spin on them. As well as a plethora of almost unbelievable life experiences, with drugs, mental issues and a cast of insane characters I’ve met along the way. I have never been into writing overly political stuff, just because I never wanted to be polarizing with my content.
Band mascot, spirit animal, inside jokes?
Matt: Hmmm…. Eddie is our spiritual, vegan drum animal,  his farts will curl your toenails.
Any stand out or pivotal moments, show wise or in the process of writing? (Big shows? Life changing events or circumstance)
Matt: Mainly just some really amazing road trips, along with all the equally amazing bands and people we’ve met doing it. The list of top-notch super talented bands we’ve shared the stage with in the last year and a half is humbling to say the least.
Playing a basement show with the legendary Malignancy last year was a pretty unreal experience.
Physical format or digital download? Pick a side.
Tim: Physical for sure
Matt: I’m an old fart. Physical all the way
Plugs, shout outs, last words…
Matt: There are just too many sick bands and awesome people to individually thank them all properly. Just a sincere “Thank You” to everyone who’s come out to a show,  bought some merch and had some kind words. We love what we do and love meeting new people. Stoked to get back on the road. Keep up with the latest from Organ Trail at their bandcamp and be sure to support them on their next run of shows. Certainly a force to be reckoned with now and the foreseeable future!  Hails to the underground!
In this article:A Gross Misuse of Anatomy, organ trail