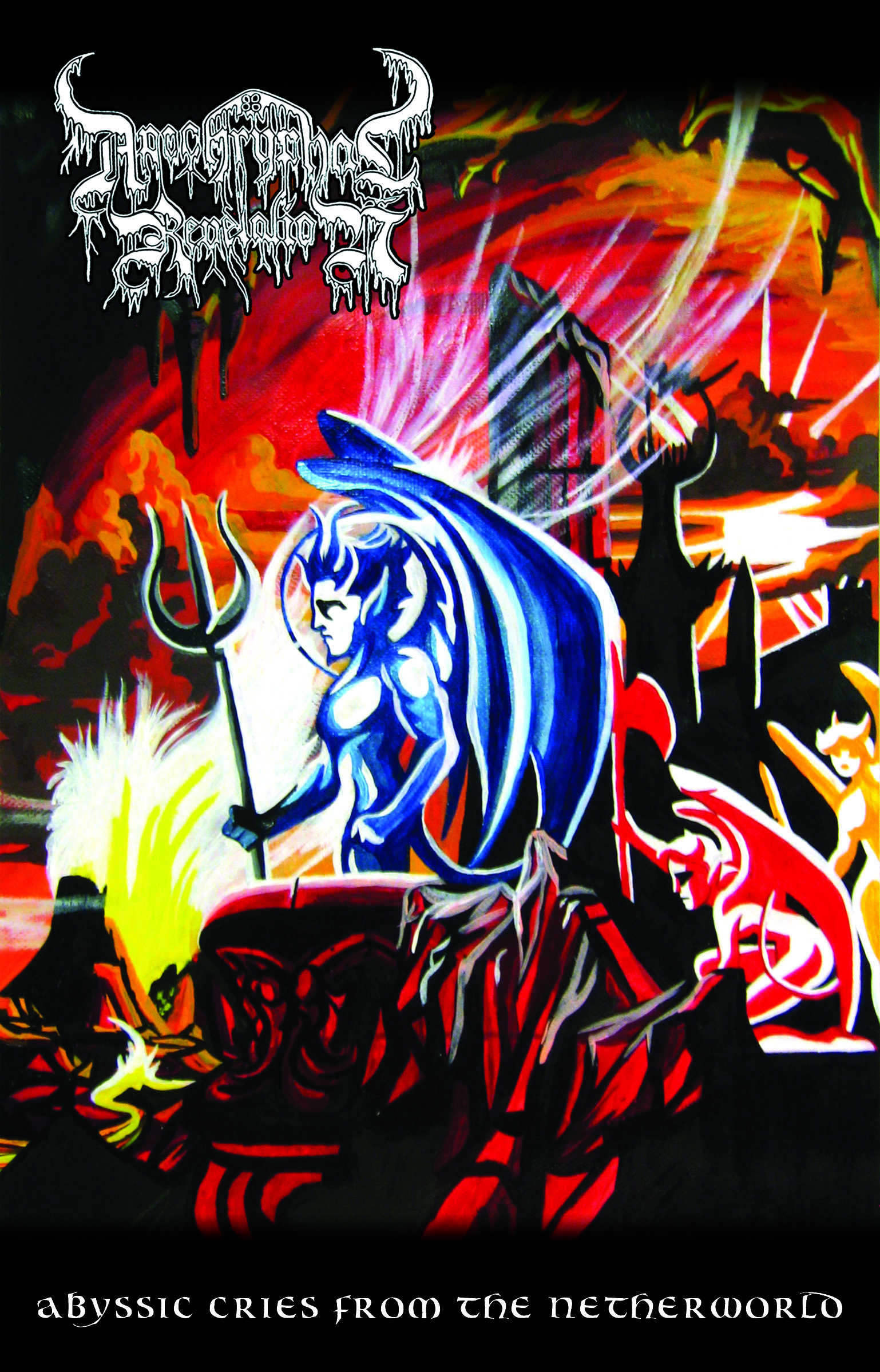 Raw Black Metal: a form of art as tried and true as any in the extreme metal underground. Yet, it’s a style that seems lost on many in this day and age who have grown up listening to more modern interpretations of Black Metal. Where improved production values and greater experimentation has taken hold, there are many who are out of touch with its more humble beginnings. However, for some, these primal influences are as deeply rooted and valued as ever, for it’s not just an aesthetic to them or stylistic choice per se – it’s a way of life.

Insert: Apochryphal Revelation out of Lexington, Kentucky – of all places. While raw Black Metal still certainly exists, the heartland of the United States isn’t exactly the first place you’d look, nor is it where you’d expect to find acts as intensely dedicated to their craft as Apochryphal Revelation are. But when the steady crackling of a funeral pyre burning for all mankind creeps through your speakers in the opening seconds of their latest demo Abyssic Cries From The Netherworld, one can already sense that there will be no gimmicks to be found here, just fire and brimstone.

And so it’s from the pulpits of damnation that this demo begins with the appropriately titled “Inverted Genesis,” a track that transitions from its aforementioned sulfurous introduction to an eerie, hypnotic riff that entrances as it picks up speed and gathers momentum, only to abruptly shatter that induced trance with “Father, Son, Holy Spirit.” Like a punch to the gut, the second track off Abyssic Cries… hits hard and fast with hammering percussion, sprawling riffs and vocals that bellow forth with pure evil attitude. Raw and aggressive, this song comes and goes in a flash (just a minute and 44 seconds in length), but manages to build and climax with the best of them.

Channeling visions of the end times, the next few tracks give you a little more room to breathe but still scorch all that is holy with their hellish, penetrating screams amongst a succinct set of swirling, hypnotizing riffs and bass lines that swell and pulsate with more gravity and force as the songs carry on before “Prayer to Flauros” hits you with an eerie, demonic interlude that reigns things back in and reminds you of the ultimate purpose of releases like these – that is, to channel and evoke evil, through whatever means possible. Spellbound incantations persist on this release though, and none more so than the grandiose, 8 minute long opus “Final Saint Befouled,” which showcases the bands best song writing and really, one of the most outstanding, impressive songs I’ve heard in the underground in recent years. While I chiefly hear a tightly wound combination of Profanatica and early bestial influence on this release, “Final Saint Befouled” brings that and much more as AR navigate(rather smoothly, I might add) a foray into the sounds of the best and brightest in the history of the Greek Black Metal underground. After a little more than 5 minutes of tempered brutality, the song takes a sudden, hair raising turn with a classically inspired lead that will grab even the most tone deaf of listeners. As climatic as it gets, “Final Saint Befouled” throws you off a cliff when you’re least expecting it and sweeps you away on demon wings with Varathron-esque melodies and atmosphere, complete with spoken vocals that fans of the Greek style will instantly latch onto.

Simply put, this release is a breath of (old) fresh air, one that I recommend to any and all, whether they be old school die hards or a pair of fresh ears that need to brush up on their history a bit. This release is mandatory listening in 2015 and for a bit more insight on this little known gem of the USBM scene, I caught up with AR main man Master of Graveyard Torment to find out more for CVLT Nation readers that don’t want to sleep on this release. Greetings and hails! Thank you for taking the time to answer some of my questions today. Let’s get right to it: Tell us, if you will, a little about the history of Apochryphal Revelation and what your intentions are behind this project?

AR: I started in the project in late 2007 as a side project of sorts from my main band at the time, Plague of Mankind. We played rather traditional black metal and I wanted to write music that reflected my love of Hellenic black death above all, as well as bands like Profanatica, Mystifier, Mortuary Drape, Samael, Beherit, Barathrum, Von, Master’s Hammer, Sarcofago etc… The intention was and always will be to create the most evil metal I can in a late 80’s/early 90’s fashion ,so to speak. Ideologically, we stand proudly for Satan and his glorious angels and offer the utmost praise and devotion with our words. We also enjoy reinterpreting forgotten holy texts with our own ideas and creative filters, whether it is simple blasphemy or using ancient characters to prove a particular point, depending on the intention of the song.

We played horrible local gigs for the first few years of existence and had a long way to go, but the changes were happening. The second birth of the band was somewhere in 2012, in which we had our sound completely worked out and began a relentless campaign of local assaults that continues until this day. Abyssic Cries from the Netherworld marks the first recording that truly captures our sound and ideals and while comprised of older material dating years back, it gives a good idea on where we are and perhaps where we will be going in the future. All I can say is, Hellas awaits. I definitely can sense those influences in the music, particularly the straightforward riffing and blasphemous attitude of Profanatica. The overall atmosphere sounds genuinely evil to my ears, so what is it exactly brings this out of you? Would you say there was any specific event or moment in your life that led you to the dark path?

AR: I was raised in a very fanatical Pentecostal environment, with snake handlers, speaking in tongues, and a staggering amount of mental illness and dysfunction, so Satan was always at the forefront of my awareness. From a very young age, I was full of darkness and hatred and had several malevolent supernatural incidents occur in my formative years. Some choose darkness, some are born into it…Apochryphal Revelation exists to elicit and exalt this evil in audial form, as the dark spiritual current that lives in this world flows freely through myself and my art, perhaps in my whole existence, depending on who you ask. Musically, finding Sepultura’s Morbid Visions/Bestial Devastation, Celtic Frost’s To Mega Therion and Mercyful Fate’s Melissa at age 12 was the starting point in my quest for evil metal, and honestly to this day, I still yearn to channel the Satanic frenzy and possession of Morbid Visions.

Wow. I can only imagine how mystifying and traumatic those experiences must have been. It shows in the music and I’m glad you said that last bit. There does, indeed, seem to be a wide array of influences on this release, yet, they come together rather well. It’s full of the raw, bestial aggression you just referenced when speaking of Morbid Visions and even has a rather perfect homage to Greek legends Varathron on “Final Saint Befouled”. How do you go about incorporating all these influences without them coming off as forced or contrived? Also, how do you feel about the resurgence of Greek influenced Black Metal in recent years? Does Apochryphal Revelation aim to be part of that movement or do you see yourself as always being something of a jack of all trades with respect to style?

AR: In regards to the array of influences, there is no rule or standard so to speak. If the parts flow and maintain the same feeling, then that is what matters. I am of the mindset that Black and Death metal in their truest forms share much common ground. That intangible sense of evil, dread and fear reeks from many albums, be it “Scream Bloody Gore,” “Worship Him,” “Pure Holocaust,” “Reflections of the Solstice”or “Drawing Down the Moon” for instance. The cursed, evil vibe is what I seek, whether one calls it Black, Death, whatever…

Hellas is indeed finally getting the respect they deserve regarding their ancient Black/Death works. There is a minor resurgence going on and it is wonderful. Apochryphal Revelation will always be deeply connected to these bands, even if perhaps a release or song is more violent than the typical Greek style. The occult approach and smothering abyssic atmosphere is where my creative muse lives and we will never wander too far from home. Actually, we are preparing a Hellenic worship release right now,purely honoring the majestic style of Varathron, Rotting Christ, Agatus, Necromantia and all of their contemporaries.

As such a devout follower of this style, it seems natural to contribute back to the wellspring which has given us so much. As for the future of the band in relation to the Greek style, Thou Art Lord’s Eosforos, Varathron and Rotting Christ’s demo work and even early Necromantia will be more present than ever. There are also plans of a full length demo level release focusing on more 80’s influence and adapting our riffing style and atmosphere into the methods used by Tormentor, Poison, Necrodeath, Tudor, Mefisto and others of a similar sound. We do not intend on repeating ourselves stylistically, so there will be much growth within the given parameters while keeping our unique approach to riffs, songwriting and atmosphere. I’d love to expand on my love of Brazilian Death Metal one day as well if we find a proper drummer and work that into the sound. Only death will stop me from conquering all of the sounds I love. Excellent. As a big fan myself of the Greek style, I’ll await your next release with bated breath! As for “Abyssic Cries…”, is there any plans to have it released with any label in particular? Do you have any requirements or preference for who you’d like to work with?

AR: We are currently seeking a label as a matter of fact. Beyond an adequate tape and CD pressing, I am rather open to offers. We are not a typical band by any means, so I do not worry about a label’s past roster or reputation too much. I’d rather be high priority on a smaller label than a small fish in the pond at a bigger label, if you will. I’d love to see a Mediterranean and South American release in particular. Iron Bonehead, Black Vomit, Darkness Attack and Behold Barbarity have all released some excellent works recently, so these seem like a natural fit. Anyone seeking to work with us can contact me at masterogt666@gmail.com with offers or ideas. Endless thanks for the support my brother. Praise Satan and hail the Wolven Brotherhood!

Thank you for your time!