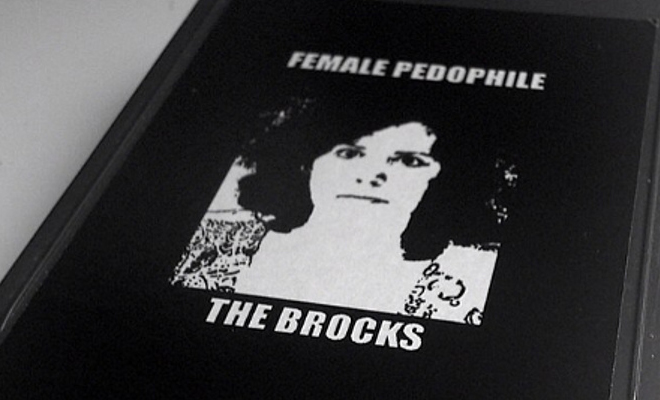 Attention grabbing, controversial album and artist titles are the nom de reguer of noise music. With musical extremity comes thematic and visual extremity. I had thought that shocking album titles had reached a plateau, a place where I just was not shocked anymore, that is, until the Female Pedophile False Security cassette found it’s way into my mailbox. I thought I was used to sexually deviant themes in noise, but pedophilic themes left me feeling…icky. Yet, I couldn’t let the tape go unheard, despite my trepidation.

I listened to the tape and thought it was perfectly serviceable noise. It had a lot of potential and I hoped that I would hear another release down the line and then I forgot about it.

Later, while wondering the internet, I heard that Female Pedophile would be releasing a new album, this time on an eight track tape. With my love of esoteric formats and harsh noise, I couldn’t help but give it a listen. I’m glad I did, as it totally blew me away.

The album is one long piece, clocking in at around twenty six minutes. I listened to it in one sitting, and not once did I feel like turning it off and not once did it cease to be enjoyable. Unlike a large portion of noise albums, this tape manages to hold on to originality.

The beginning of the track is wall noise, static and repetitive. It is pure audio-neutrality until about eight minutes in. Then, very low and faint in the mix, a crunched, blown out beat can be heard. The track immediately becomes chaotic. Noise swirls and slides and tones collide and duke it out in your ears. What appears to be distorted samples of thunder and screaming are layered in the mix. It reaches a cacophony and then, jarringly, slips back into the repetitive wall noise. I waited with baited breath for the tracks launch back into bedlam and then the music stops. A sample of a news report about Susan Brock, a woman who regularly molested a young boy. The track cuts out with a haunting testimony from the boys father. It is truly harrowing.

This release was a daunting, yet satisfying, listen. The music is a stop/start thrill ride but it’s the themes that really challenge me. Pedophilia is difficult, and listening to music that addresses it makes me feel on-edge in a way that people who first listened to Luigi Russolo or Boyd Rice. I recommend this album for people that have the nerve to listen.