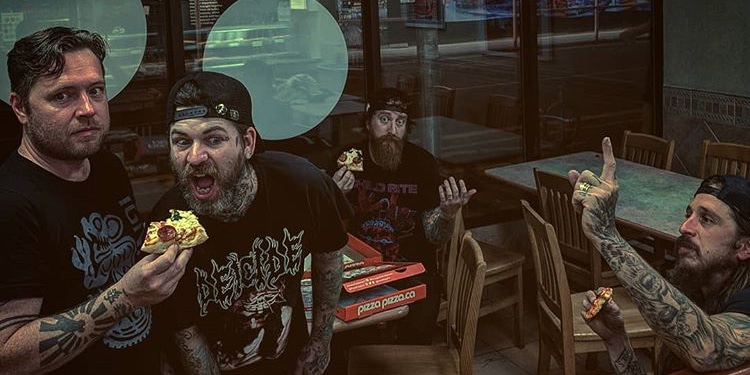 Human beings do all sorts of horrible things to one another. Putting it to music can help sort through the gross feelings we get when we contemplate the worst of humanity – the mass hysteria and genocide that stem from pure fear and ignorance. That’s exactly what BLACK TUSK have done with their new track “Gallows Hill” that they wrote for the Savannah True Crime Compilation coming out in November. The comp is a part of a campaign to fund the construction of the Graveface Museum in Savannah, GA. The comp can be ordered here along with a ton of other options for supporting the museum. Check out our exclusive stream of Black Tusk’s track, as well as more info about their inspiration and the Graveface Museum below…

In Colonial America in from 1692-1693, our country underwent an actual witch hunt that has repeated itself, in various forms, over and over again up to the present day. “Gallows Hill” is inspired by the history of the Salem Witch trials, in which innocents were persecuted by those who were afraid of anything different. When we were asked by Graveface to contribute a song to a comp dealing with the subject matter of cults and serial killers and fear of the unknown, we felt it fitting to write about an event that truly cemented the rule of mass hysteria into our cultural and political systems, while highlighting a segment of our society’s penchant for persecuting a set of ideals or belief system or even just the way a person identifies themselves or how they choose to live outside a set of norms established by religion. Inspirations for the song aside, this is also the first song we’ve written with longtime collaborator and new guitar player Chris “Scary” Adams. He recorded TCBT for us and did this song as well. We’ve just built a new studio, so be on the lookout for more from us very soon! But in the meantime, we hope you enjoy “Gallows Hill” and a huge thank you to Ryan from Graveface for making this a possibility.

The Graveface Museum is a labor of love and an ode to all things odd. I (Ryan Graveface) moved to Savannah in 2010 and opened Graveface Records & Curiosities in the Starland District in 2011. I also moved my independent record label operation and have started two more labels since being here. I’ve been collecting morbid historical artifacts, horror sci-fi pinballs, death row artwork from infamous criminals and more basically all of my life. It’s always been a dream of mine to have a means of sharing my collection publicly and I couldn’t imagine a more perfect city to do this in.

When I first moved to Savannah the city was genuinely weird. It felt like one of the last remaining authentically strange places in the country which is part of what drew me in. One of the main reasons I left Chicago was to escape the rampant gentrification of unique neighborhoods that I cherished; unfortunately, Savannah is heading down a similar road. The city I adore is losing its character and charming grit to craft cocktails and overpriced food popping up on every corner. My goal with the museum is larger than putting interesting oddities on display; it’s to offer something deeper and more impactful than what’s currently being offered in the city. My hope with the museum is to get people talking or at least thinking about larger topics like morality, life, death, problems we still face with the criminal justice system, experiencing things of the past, and appreciating history to help reflect on today’s culture. Or you can just go look at cool stuff and play spooky pinball.

In this article:BLACK TUSK, savannah