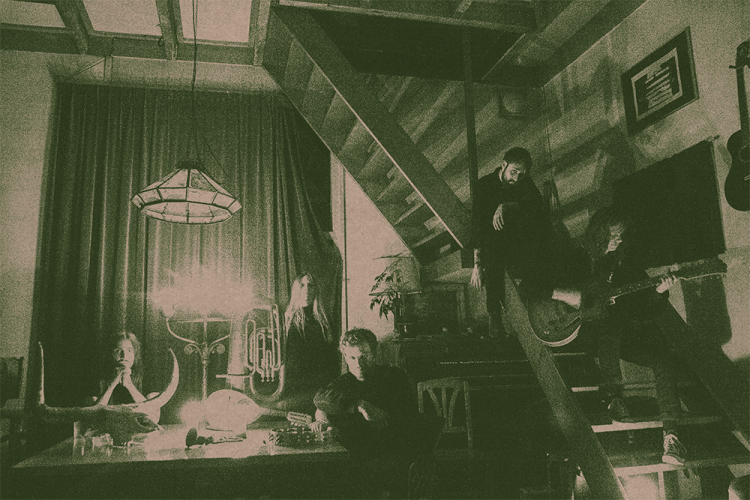 Like all good Black Metal, this thing is cold. I don’t mean blasts of arctic winter cold, but more the kind that comes from opening the door to a haunted basement in a gothic castle. There’s chilly, and then there’s the kind of chill that raises your hackles. This one is the latter. Ghosts fill the room, some scary, some winsome, others weeping. It’s also furious, meaning it punches you in the face from get-go and does not stop.

Nusquama is a Dutch quartet and this is their first release. They don’t sound like amateurs, they sound like a band with a sharp vision and nice chops. The lyrics draw from Thomas More and the pre-romantic poetry of Elizabeth Maria Post, but none of this will mean much to the listener unless they have a lyric sheet in front of them. In other words, the singing sounds like tortured, strangled screams, like all good Black Metal should. But I will say this: the raw emotion is there, something that helps to distinguish this from just any other record. Also, I love the drum sound on this. Drummer M. goes from blastbeats to this rumbling, 70’s style that really adds some nice accents to the assault. It’s another small touch that further makes Nusquama stand out from the pack.

What about the guitars? Well, you got some chiming, you got some melodic, you got some of that fast and raw picking, and you got some riffing. I don’t know what more you could want if you’re a Black Metal fan. It’s all here, wrapped up nice and tight but still loose enough to rattle and shake while it also terrifies and utterly breaks your heart.

One thing I really enjoyed about this is that the band doesn’t just hammer you to death. They let things breathe some, a Death Rock groove snuggling in here and there, along with some quiet, melodic passages, giving warmth to the utter soul bleakness that permeates most of the album. I didn’t have the lyrics, but this thing really feels like a mournful celebration, a tightrope walk between despair and romance. Maybe I’m off here, but that’s the vibe I got. And I like it, because this isn’t typical. It’s not evil trolls or rotten demons, it’s very personal. Kudos to the band for capturing this aesthetic. And if I’m completely wrong, well, that’s what I got from it and I liked it.

In any case, if you’re in the mood for some great, solid Black Metal with its own feel and personality, you cannot go wrong with this record. It’s a nice introduction to a really good band that hopefully has a bright but dark future ahead of them.