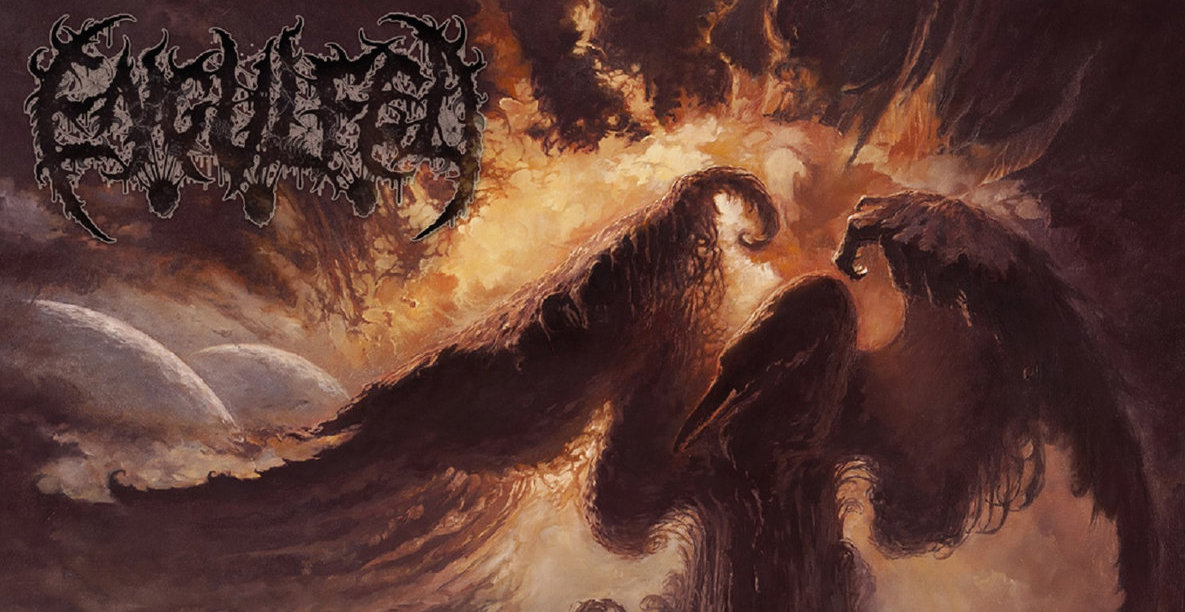 Black/death metal of the downtuned variety is oh-so-fuckin* heavy. With downtuned guitars yielding unwieldy guitar riffs in impossible basso profundo fury, black/death metal bands like Altarage, Spectral Apparition and a host of others have started what is effectively a merging of tremolo riffs and near buzzsaw brutality the likes of which has not been seen. Black/death metal, as I’ve said in prior articles is a thing, and it is a great thing at that.

The band Engulfed is throwback to death metal supremacy, and their extremely heavy take on death metal is absolutely spellbinding with its sheer weight and intensity. Sure, the band slows down on occasion to feature some soloing and songwriting nuance, but Engulfed show no mercy on debut album, Engulfed in Obscurity, care of Hellthrasher Productions. Black/death metal may be a thing, but there’s also nothing like death metal without semantics.

One look at the cover art leads unassuming listeners to a press of the play button. The logo hints heavily at death metal majesty, but a listen is all that is necessary to reveal the band’s obvious capacity for death metal art. There are no rung notes, no icy cold staccato plucking, no lithe razor-sharp tremolo-picking. Engulfed presents a suffocating sojourn into a town engulfed by ash in the midst of a volcanic eruption. The riffs here aren’t hackneyed, or overdone. The band switches gears, and the riffs are sufficiently entertaining. The drumming can be heard easily underneath the heavy buzzsaw-like guitars and thick bass. In fact, the tom-tom hits offer thudding rare in an age where raw production is common practice.

One look at jaded metal fans will reveal the insidious destruction of all that is worthwhile in the discovery of new music. But, Engulfed may just perk up ears and pique the interest of listeners who love elite Scandinavian death metal. Stream this fucker at full volume and watch the neighbors run for the hills.

No longer as big in underground circles as the next big thing might be, Scandinavian-influenced death metal is still a perversion of the genre that I love dearly. This style will not die, and fans of this sub-genre will love well-executed examples of this type. So, download a digital copy, or pick up a record from Hellthrasher Productions. Ashen, victorious, deserving of more press, Engulfed and its album Engulfed in Obscurity is streaming a track here at Cvlt Nation for fans of casual listens. If you like what you hear, support a band that affirms our passion for great death metal. Great death metal is proliferate in underground circles devoid of mainstream marketing gimmicks. Take Engulfed as an example. In this article:DEATH METAL, Engulfed, Engulfed in Flames, Hellthrasher Productions