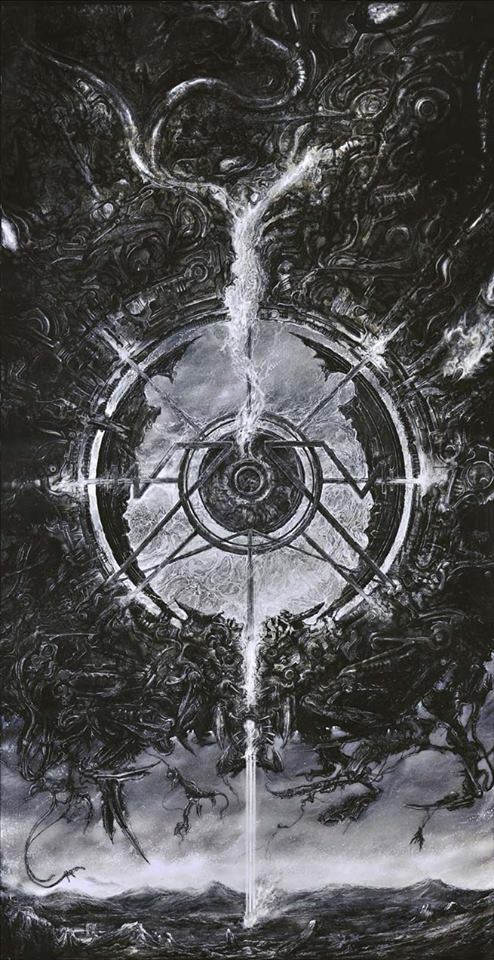 So, CVLT Nation aficionados, care for a killer review? Are you listening to too much Foreigner, playing, “I Want to Know What Cvlt Is?”  Well, its October 2014, and another highly-anticipated album drops on Al Necro’s lap. ZOM is the name of the band, and their album Flesh Assimilation is a raging hybrid beast of blackened death metal fury. I headbang to all but a few of its tracks, wishing ZOM was as prolific as some of Mother Nature’s most promiscuous creatures (maybe A-Rod proportions). Oh well, we can’t have it all, metalheads. So read on, sample the stream and get a copy for yourselves…

ZOM sounds hungrier on Flesh Assimilation. Yours truly was swinging from the chandelier like a wrecking ball aimed at the Empire State Building. To say that ZOM upped the intensity on their latest full-length album is an understatement. Instead, I’d like to say that ZOM wants to fucking kill somebody! Like a demolition derby, ZOM clears out the posers within the first few seconds on the record. They have nine tracks for you kvlt warriors to dig your ears into this time around. The mid-tempo riffs absolutely send every soul within a kilometer radius to the moshpit. They hyperblast like its nobody’s business. During the aforementioned blast sections, you’ll have to hold on to a railing somewhere as ZOM send the moshpit at you swirling like a maelstrom. The hyperblasts, in particular, caught my attention as they sounded so fuckin’ heavy – yours truly used a couch for a bunker, checking back on the loudspeakers when the coast was clear (Not really… you know there’s nothing too heavy for Al Necro). Needless to say, this album had as much ferocity as a feral cat springing on ol’ Remy from Ratatouille (and clawing the little rodent’s eyes out). This album should have been Devin Townsend’s idea of Heavy as a Really Heavy Thing.

There’s an intro that doesn’t last too long. It sounds like the onset of impending armaggedon, then makes way for the killer riff and the blastbeat. After that, hell rocks for more or less 32 minutes of spirited shredding and downpicking until the silence leaves you wondering whether a megaton bomb just dropped on your house. Intensity doesn’t show in how fast you shred, or how technically proficient you are. It makes itself obvious when you kill your instruments and still nail your parts like its nobody’s business. ZOM do, and they do so in a massive way. Just check out the pick-slide on track five, “Conquest,” for a riff on the ride to the darkside. The drummer, make no mistake, is a drumkit psychopathic serial killer!

If you like your underground death metal, anti-technical and intense, ZOM’s Flesh Assimilation is no-nonsense Bring Me The Horizon fan-bashing. Don’t take this album on a quiet ride to the countryside, unless you want said countryside to bathe in poser blood. The corpse of death metal is a living, stinking, redolent mass of blood, flesh and pus. Yours truly can smell this corpse all the way from Dublin, Ireland, where the band is from. Invoke your inner maggot and devour this blackened death metal corpse of an album.