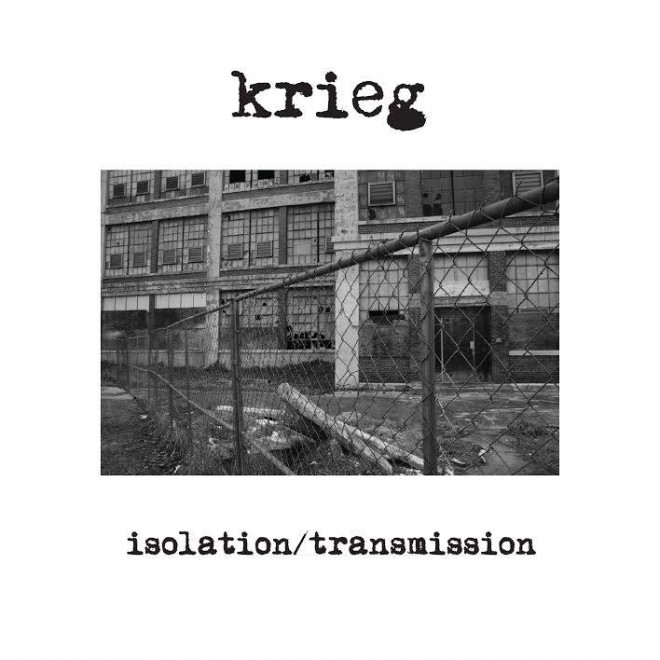 Krieg have been around in some form or another for nigh on twenty years now, and their outrageously prolific career has seen their take on black metal evolve and shift from album to album (and EP and split and demo) so it shouldn’t come as too much of a surprise that their Record Store Day release is one that takes a step back into the past and pays distinct homage to the wonderful era of post-punk. It’s a genre that is held very dear to the heart of band founder/vocalist/guitarist N. Imperial, and one that in recent times has coloured many a black metal release (see Vaura or Beastmilk for example).

With Isolation/Transmission, Krieg take those initial beats and sounds and transform them into newer ordeals, filtering them through a more modern lens. The two tracks here still retain the base notes of sadness and dejection that Joy Division gave to the world (the 7″ title is taken from two gorgeous Joy Division tracks) but with a twist that adds an element of intrigue.

Isolation/Transmission shares its aesthetic with many Factory Records (the infamous Manchester-based label) releases – the artwork in particular evoking many classic covers of the label’s heyday – and it’s this use of imagery and tone that gives the record a hazy aura of past regret. “Walk With Them Unnoticed” is a harsh and despondent trip which plays rasped vocals off against stunning guitar work in order to create a disjointed vibe that speaks of separation and misery, while “To Speak With Ghosts” allows deep bass notes to drive the song forward into a feedback squall and oblivion. Isolation/Transmission is something a little different from Krieg, but is no less emotive for the change in tack. Krieg are one of the most impressive and exciting black metal bands out there – long may they continue to experiment and shift their sound, particularly if this is an indication of things to come.

Init Records will be releasing Isolation/Transmission on vinyl exclusively for Record Store Day with 500 orange copies available from independent record stores worldwide on April 19th. In addition, Init will have an extremely limited version of the 7″ on purple vinyl which will be curbed at 166 copies – they will come with a download, a sticker and a pin. This version will available directly from Init Records with more information forthcoming after RSD is done.