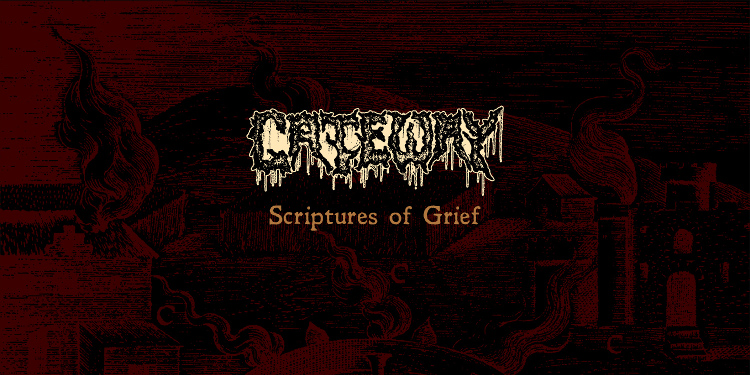 Sentient Ruin will soon unleash a behemoth of slime upon the world. February 3, 2017 will in fact see the release of Gateway‘s inhumanly toxic and devastating death-doom masterpiece Scriptures of Grief. Comprised of a single colossal song clocking in at an absurdity of twenty nine death-eaten minutes, and divided into three separate movements, Scriptures of Grief is a work which touches unfathomable depths of heaviness while setting an entire new bar in what total sonic rot means. This is what Sentient Ruin had to say about this absurdly heavy death-doom beast they are about to release:

100% DIY one-man death-doom destruction straight from the fucking kingdom of the dead. Belgium’s Gateway plays sepulchral and bestial death-doom that will rot your mind and batter your flesh. A literal “gateway” to the underworld materialized through a comatose and rotting funeral march deep down into bowels of hades, Gateway’s rotting music is an unforgettable sonic stampede delivered through a slow-motion crawl of colossal and mummified death metal riffs that will trample over the listener with the force of a behemoth unleashed from the most slime-ridden crevices of hell. An authentic triumph of rotting riff worship for fans of death-doom legends like Disembowelment, Undergang, Coffins, Winter and Thorr’s Hammer.

There isn’t much more to add to that – you probably can tell just from that what you are dealing with: total, unadulterated, unchallenged, invincible SONIC BLIGHT. CVLT Nation has now been given the honor to stream the first track from release, “I,” an inhumanly bestial death crawl straight into the bowels of hell that serves as the first portion of the massive  twenty nine minute-long song. You can pre-order tapes and digital products from Sentient Ruin on their store or Bandcamp (where the label has even made their test cassette available for purchase).