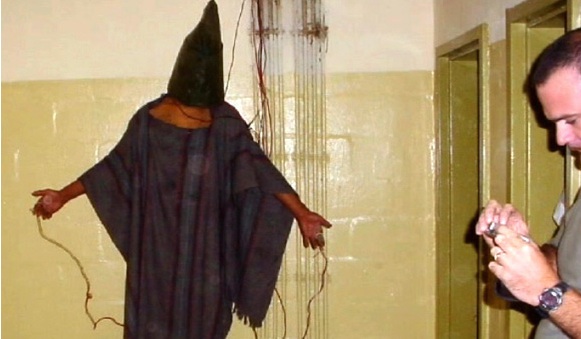 As the President gets us all psyched up to commit more atrocities abroad, let’s reflect on the reality behind the lies. It’s regime vs. regime, and us citizens just get in the way. Our noble military will travel overseas to kill, maim and torture men, women and children at the behest of the world elite. And we will see photos of it, and do nothing. Again.

In spring of 2004, the International Center of Photography in New York presented an exhibition called “War in Iraq: The Coordinates of Conflict”, featuring the work of James Nachtwey, Christopher Morris, Ron Haviv, and other veteran photojournalists. Apparently timed to mark the first anniversary of the Iraq conflict (the American invasion began March 19, 2003; President Bush triumphantly announced its end a month and a half later, on May 1), the show included most of the usual tropes of combat photography, from portraits of weary but determined foot soldiers to bloody corpses of the enemy. What was different about the pictures compared with traditional war photographs was that all had been shot with digital cameras.

The curators, Peter Howe and Edward Earle, spoke to this difference in the exhibition brochure:

This is an unprecedented moment in the history of photojournalism, and in our understanding of its role in the media. The war in Iraq demonstrates a dramatic change in the way news is gathered: the development of laptop computers, digital cameras, satellite phones, and micro recording devices has enabled the photographer to give viewers immediate, live access to the battlefield.

At the same time the exhibition was on view, however, a much more dramatic and profound change in the history of photojournalism was making itself felt in the corridors of power in Washington and soon thereafter in the press and across the nation. During the first two weeks of May, millions of Americans were exposed to pictures of the torture and abuse of Iraqi prisoners at Abu Ghraib prison, twenty miles west of Baghdad. The photographs, in color and from digital cameras (albeit with lower resolution than the professionals’ models), were taken by American soldiers complicit in the sexual humiliation, psychological terror, and physical injury of their charges, all of whom were prisoners of war or, in the less precise official description, detainees.

Much has been written about the moral, ethical, and political dimensions of these photographs, about whether United States military policies condoned and encouraged the abuses, about whether the word torture appropriately describes what they depict, about how young Americans thrown into a situation for which they were ill trained and ill prepared could so quickly succumb to depravity. When select members of Congress were shown some 2,000 of the pictures and video clips in mid-May of last year, they quickly concluded that what they saw was too disgusting to be shown to anyone else. The pictures have since been quarantined as potential legal evidence.

Without forgetting or discounting the importance of these debates, which our nation surely needs to have, I want to focus on the unprecedented manner in which these photographs were taken, transmitted, and received. What they suggest about the future of photography as news and about the nature of information as a cultural commodity is both tantalizing and disturbing.

The Abu Ghraib photographs were taken with commonplace “point and shoot” digital cameras owned by at least two of the alleged participants in the abuse. Being digital, the cameras recorded the scenes as arrays of pixels that were instantly compressed into a near-universal format called “JPEG.” The advantage of such compression is that it makes it easier to store pictures on a hard drive or memory card and to send them via e-mail and the Internet to friends and relations. The sharing of e-mail photographs has become the common coin of today’s image economy, and it has contributed to a proliferation of all sorts of photographs, from shots of cars for sale on eBay to explicit pornography. The Abu Ghraib photographs are, as Michael Kimmelman, the chief art critic of the New York Times, has remarked, “the visual equivalent of cell-phone chatter.”

They are, however, cell-phone chatter with the capacity to dominate the news and shock the national psyche. Soon after their appearance, the doyenne of American cultural critics, Susan Sontag, provided an analysis of their problematic power in the Sunday New York Times Magazine. There she noted a change in the cultural role of picture taking:

The pictures taken by American soldiers in Abu Ghraib … reflect a shift in the use made of pictures–less objects to be saved than messages to be disseminated, circulated. A digital camera is a common possession among soldiers. Where once photographing war was the province of photojournalists, now the soldiers themselves are all photographers–recording their war, their fun, their observations of what they find picturesque, their atrocities–and swapping images among themselves and e-mailing them around the globe.

This may be why Defense Secretary Donald Rumsfeld has since banned the use of cameras by soldiers in Iraq. In any case, it seems fair to agree with Sontag and say that photographs no longer serve mainly as first drafts of history, or ciphers of memory, or treasures of affection, or any of the other high-sounding social functions ascribed to them in the twentieth century. They now are simply visual talk. And rarely are they capable of complete or coherent sentences–they speak in a contemporary patois of whatevers and what have yous.

Less than four months after the close of the “War in Iraq” exhibition, the International Center of Photography mounted a new show on the same subject, called “Inconvenient Evidence,” only this time the works on view were the photographs from Abu Ghraib prison. Tim images were downloaded from Web sites like www.newyorker.com, www.washingtonpost.com, and www.thememoryhole.com, then printed out with a desktop inkier printer and push-pinned to the gallery walls. A simultaneous version of the show appeared at the Andy Warhol Museum in Pittsburgh. (You can easily reduplicate the exhibition at home; the pictures are still available on the Web sites mentioned.) The exhibition’s presentation was clearly meant to resist aestheticizing its subject. What was most radical about the show was not the installation, however, but the museum’s recognition that its implicit subject, photojournalism, had been irrevocably altered.

ICP chief curator Brian Wallis, in a brief essay in the exhibition brochure, put the phenomenon in a representational context:

Aside from the atrocities they depict, as photographs, the images from Abu Ghraib contradict the studied heroics of twentieth-century war photography that have been updated to the current conflict. Away from the photojournalistic flourishes designed to make war palatable – the heroic flag-raisings, the dogged foot soldiers close to the action, the sense of shared humanity among combatants, and the search for visual evidence that war is universal and inevitable – the often-banal JPEGs from Iraq proffer a very, different picture: war is systematic cruelty enforced at the level of everyday torture.

Wallis’s analysis alludes to but does not make explicit the existence of conventions and understandings that have governed the traffic in war photographs since the nineteenth century. For example, Roger Fenton’s photographs from the Crimean War–often cited as avatars of modern photojournalism–were taken with the benefit of a letter of introduction supplied by Prince Albert. To some historians, this means that Fenton was serving not as an objective journalist but as a propagandist charged with showing the British public a comfortable, well-supplied army. This may be too simplistic an interpretation, as the curators of a Roger Fenton exhibition recently organized by the National Gallery indeed suggest, but the complexity of Fenton’s motives does not negate the fact that his presence on the front was sanctioned by the British military of the day.

The same could be said of Robert Capa’s presence on a landing craft on D-Day, or of W. Eugene Smith’s beside marines on the beaches of Iwo Jima. All of the great photojournalism of World War II, and of the Korean War as well, was made possible by the collaboration of the government and the media. Magazines such as Life promised not to publish pictures of American dead, and the photographers knew where their allegiance lay. The government provided access, transportation, and a measure of security. All this cooperation between government and free press began to unravel during the Vietnam War, the first conflict to be both widely photographed and televised in color. The appearance of war’s ugly, inhuman side, in photographs by Eddie Adams, Nick Ut, and Larry Burrows, helped fuel American dissent against our involvement. Ronald L. Haeberle’s even more shocking photographs of the aftermath of the My Lai massacre, published in Life in 1969, were the Abu Ghraib pictures of the Vietnam era. Yes, they seemed to say, American troops could behave with the kind of bestial cruelty that we imagine belongs exclusively to our enemies.