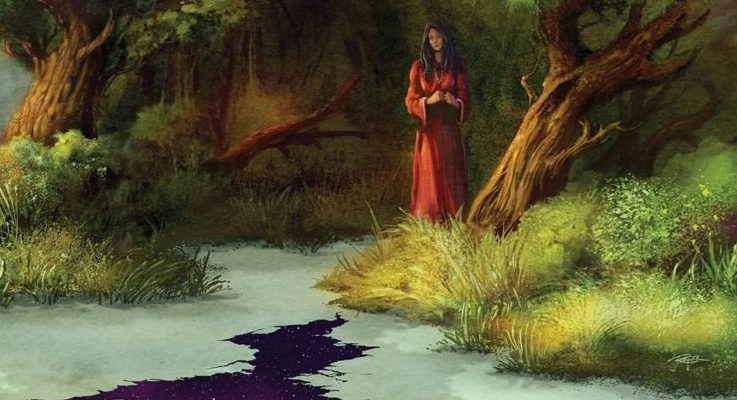 Since Windhand first dipped their toe in the not so murky waters of melodic doom, they have not been short of admirers. Mid-paced, with fuzzed up grooves that you could open a tin of peas with, and of course the smoky vocals of Dorthia Cottrell. What’s not to like about these Sabbath devotees from Richmond, Virginia?

Eternal Return is their fourth album and despite the plethora of dreamy doom bands the opening track ‘Halcyon’ is unmistakably Windhand and once Dorthia’s dreamlike tones add further hazy resonance to proceedings we tumble carefree into a languid hallucinogenic portal. The droning delivery continues on the well titled ‘Grey Garden’ in which Dorthia is slightly more expressive, the hooks that little bit sharper and the drums are tested more fully. Windhand execute tension perfectly building slowly but keeping you in the dark as to what lies around the next corner. The journey though is rarely anything other than pleasurable and on ‘Grey Garden’ you almost want to get down on your knees and start planting. The reality though is that this is a typically morose affair and all the watering in the world is unlikely to result in many youthful shoots of life where Windhand are concerned.

‘Pilgrim’s Rest’ is a shorter affair although that’s not to suggest it’s a snappy affair. As if! In fact this is a beautiful ballad, played with endearing simplicity, Dorthia just given enough accompaniment on a track that you could safely play in the presence of a sleeping new born without fear that the infant would be disturbed. While Dorthia’s perceived disdain is the polar opposite to Kylie Minogue’s gold lame eccentricities, the Richmond singer does actually sound a little like the Antipodean icon’s career highlight union with Nick Cave. While musically diverse, Dorthia carries a similar distance to Poison Ivy, guitarist of legendary rockabilly fiends The Cramps. It almost borders on aloofness, a sense of something being on a higher plain, which in itself can be an attractive trait. Certainly Dorthia’s heavily textured vocal threads seem even more to the fore on this album.

Windhand of course explore the kind of demons that you’re much less likely to encounter at a Kylie show, ‘First To Die’ being another haunting number in which the fuzz levels are sown so thickly you almost have to step over them. ‘Light Into Dark’ is a mindnumbing instrumental which sounds as though it was recorded in the room next door. One slumbering groove is carried through the duration with some Hawkwind-like techno twiddling adding a further shimmering hazy glow. The final stages of Eternal Return are dominated by two substantial compositions, each stretching beyond the 10 minute mark. For those who need doom to be powerful and prolonged ‘Eyeshine’ and ‘Feather’ both fit the bill. The first of these finds Dorthia really stretching out with her vocal range against a crushing wilderbeast of a bassline with drums used sparingly to good effect. As its name suggests ‘Feather’ is lighter in every sense, a melancholic wisp that slowly circles you like a cloud of smoke. A mesmerizing closer.

After a decade together Windhand really do sound like a very accomplished act thesedays and anyone catching them on their current extensive US tour with Satan’s Satyrs is in for a treat.