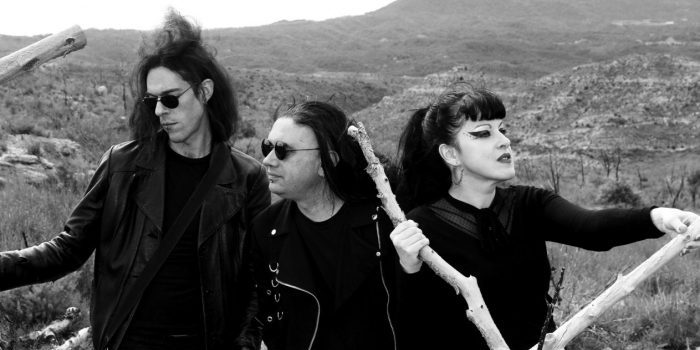 Malefixio are a spooky band dishing out some incredible darkwave out of Barcelona, Spain. Their album Culto a lo Invisible was released last month and in case you missed it, it’s quite a gem! This band has a uniqueness to them while maintaining a distinctly goth image, the album swaying from deathrock to shoegaze and back again. Overall the album is an excellent slice of their musical talents.

Opening track “Os Maldigo” sounds like it was recorded in a cave. Atmospheric, dark, ritualistic in tone. Ghostly, echoing vocals. “Ritval” opens with an almost surf punk bass and some of the best traditional deathrock guitar you can imagine. Eva’s voices are cold and menacing, yet also sophisticated and entrancing. You feel as though you’ve been put under a spell. “Demonio-Aves” is the first upbeat song on the album. It has this unique dancey horror punk feel to it that transports you to another time– I automatically think of Dario Argento films when I listen to it.

The tone is brought back down slightly with “Salvaje”, which opens very ominously at first, but transitions into a bombastic anthem. This is one of my favorite songs on the album because as it showcases how fantastically this band can unexpectedly pull of some incredible deathrock-tinged shoegaze! Easily a must-have on any playlist. “Defixio” is much more serious in tone with a driving beat that changes throughout the almost 8-minute song. Eva’s dramatic vocals sound great over the spooky guitar and bass lines. “Virgenes Negras” is a beautiful, almost flowery darkwave track for which the music video below is an excellent representation– it makes you want to dance just like Eva.

The shoegaze tinged darkwave continues with “Todos Somos Uno”. The melody of Eva’s vocals fit perfectly with the spooky guitar lines. “La Maldad” is another dancey track where Eva isn’t afraid to get dramatic vocally– this one’s very dramatic and atmospheric, bringing back more of the spookiness we heard towards the beginning of the album. The 80s synth driven “Trivialita'” is another favorite of mine on Culto a lo Invisible. Perhaps its the prominent bass on this track, but it almost has a funk feel to it. There’s a pretty badass guitar solo in there too! The album wraps up with outro “Vete en Paz”, an atmospheric cavey track somewhat similar to the intro. This time Eva incorporates both ghostly vocals and that of a wailing banshee.