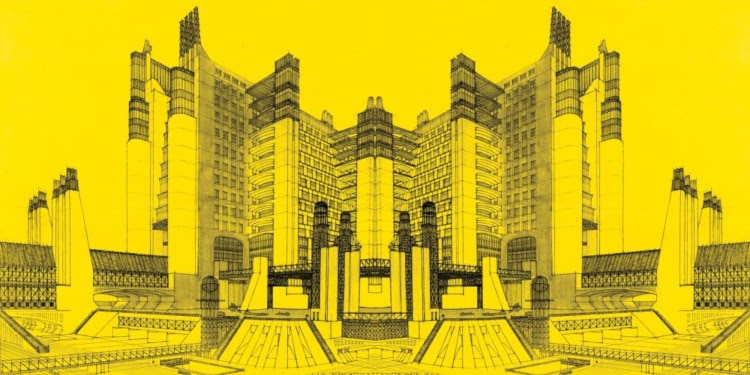 The brainchild of multi-instrumentalist Steve Peacock (ULTHAR, PANDISCORDIAN NECROGENESIS, PALE CHALICE, MASTERY), APPRENTICE DESTROYER is an experimental rock project with cinematic no-wave inclinations focusing on dense and layered soundscapes, that through a cascading chain reaction of repetitions, looped alchemies of buildup/collapse, and cyclical patterns of creation/destruction, sets to dismantle the listener’s grasp with reality from within, through the annihilation of their senses and perception. Behold…

Their first album, “Glass Ceiling Universe” (Castle Face, 2015) weaved an eclectic, driving soundtrack akin to analog Berlin school krautrock, and this new effort greatly expands the project’s horizons with an enhanced effort in heaviness and and a widened spectrum of sound. With the recent expansion of 4 lead guitarists (!!! – including members of VASTUM, ULTHAR and PALE CHALICE), modular synthesis and pummeling live percussion, APPRENTICE DESTROYER’s new album and live shows have developed into an exercise of harmonic overtone experimentation. Its heavy feedback-laden melodies, cavernous vocals, and repetitive rhythmic fervor share dynamics with 70’s synth prog, punishing noise rock and deviant garage guitar academia. The entire experience is assembled as a cinematic downfall of one’s being, or like a spectacular loss of self, as the repetitions and processes of constant building/destroying slowly dismantle and disassemble the psyche piece by piece in a spectacular trance-induced brain feeding frenzy. Highly recommended for fans of Swans, Glenn Branca, Neu, and Tangerine Dream. You can pre-order/order physical and digital copies of the work on the band’s Bandcamp.

Along with being commissioned to score the video accompanying the Grammy winning Voyager Golden Record, 40th anniversary edition (Ozma Records, 2017), APPRENTICE DESTROYER and related music from Steve Peacock in the past has been covered by Pitchfork, Noisey, Wire, Decibel, Playboy, All Music, and more.