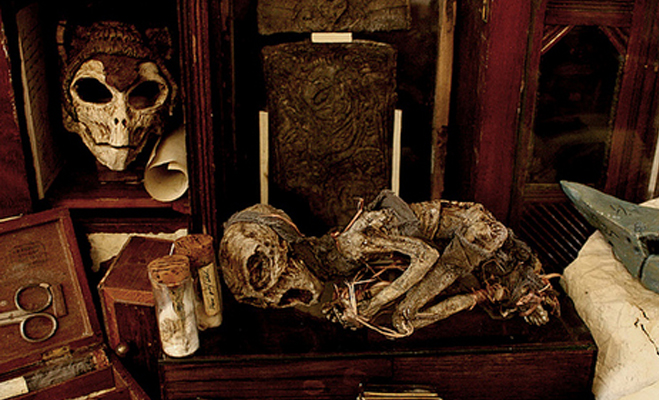 Light Bearer’s Alex CF is many things – an artist, a musician and now the curator of the Merrylin Cryptid Museum, a fascinating collection of unreal specimens compiled by 19th century British naturalist and explorer Thomas Merrylin. Alex is looking to open the museum in East London once he has enough funds in hand, and you can help out the campaign by donating here. He has spent the last 10 years preparing Merrylin’s collection for display, and is now in the final stages of preparation for the museum.

Not convinced this is something you want to support? Two words – Homo Vampiris. That’s right, Merrylin’s collection includes specimens that have been conclusively and scientifically proven to be the bones and dormant tissues of vampires. This collection is very supernatural – Merrylin specialized in finding weird and mythical creatures, and in addition to the vampire pieces, you will also find dragons, werewolves, faeries and other bizarre and unclassified species. Although we have been told by mainstream science that these creatures could not possibly exist, I’m personally not that surprised that evidence of them has been found – we haven’t come close yet to cataloging all of the diverse life found on this planet, let alone the species that have gone extinct before us. Merrylin had the advantage of time, traveling and collecting the age before human beings had expanded to such a monumental extent, covering potential finds with concrete and steel. Think of the treasures we have buried and blasted out of existence! Thankfully, people like Alex CF have made it their life’s work to make sure what history we have is not lost, and with your help he will reveal these secrets to the public in the Merrylin Cryptid Museum!

merrylin from Simon Lewis on Vimeo.

Check out some pictures of his specimens below…