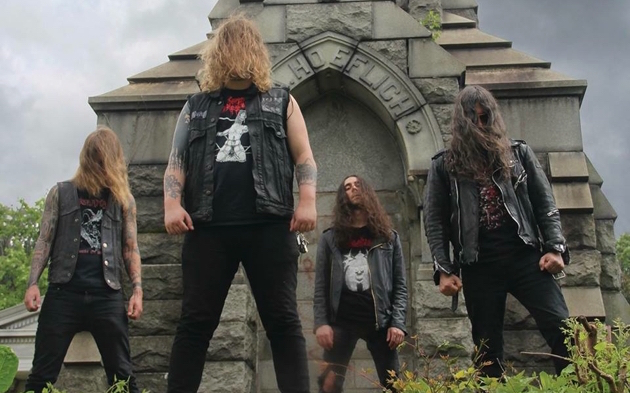 Pissgrave crawled from the depths of Philadelphia following up their debut album with another slab of rank corrupt death metal.

Trauma a term that always sends shivers up a spine. Whether it be physical or psychological trauma is never a positive effect. It can be scarring, cause profound disability, mania and is associated with insanity. Posthumous humiliation is a twisted ride in the deepest, dankest corners of a pop up carnival. Step right up, grab a ticket and prepare for an assault that will leave an everlasting scar.

Pissgrave have are a down and dirty death metal band. Their name says it all. They don’t strive to be squeaky clean and over produced. Instead they play a tortured, frenzied form of death that would only be found putrid and rotted in the bottom of a dumpster. This may at first sound like they are trying to be the next Portal, but these guys manage to build a sonic wall of speed only to slowly have a groove drip into the rhythm. Transitions are flawless, which shows the overall technical mastery these dudes have. The vocal performance on this album is unlike any current death metal vocalist. The distortion of the vocals harkens forth harsh guttural wretched vocals mimics that of a tortured soul suffocating on their own tenacious secretions.

My favorite track is the album closer “Rusted Wind”. It is radical in comparison to other tracks. There is a heavy doom presence on this track. Buzzsaw guitars tone down the speed and embrace an almost epic doom atmosphere. Mash that with those wretched vocals you get a vat of death doom goodness.

The idea of posthumous humiliation rampantly seeps through the album leaving no room for a breath each song instantly blasting into the brain like a bullet similar to the bullet that penetrated the self-inflicted gunshot victim on the cover.

Pissgrave have a different formula that is the perfect fix for all underground death metal junkies. They hit every queue in achieving a nasty slab of death metal. Profound lore is having a hell of a run with their releases and I can guarantee that this album will be on many top lists this year.