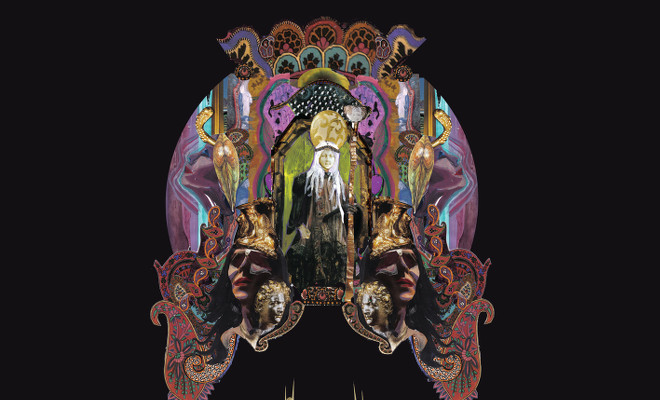 I’m not really sure where to start on this one. This album defies any attempt to pin it into a corner with any kind of label or definition. There is so much ethereal shit going on in this record that at at times it feels like it is pulsating in front of your eyes in an enormous cloud of shimmering light, leaving you gazing in amazement as it evaporates into the stratosphere above you. USA Out Of Vietnam from Montreal, Quebec, are just that: a band you can not define for the life of you and that makes music you simply can not grasp. I could name both doom metal and Brit pop to try and define them and I would be neither right nor wrong using either term. There is in fact something about doom and something else about Brit pop in here, but mostly there is everything in between, synthesized in a glorious and light-bloated explosion of celestine magnificence. But forget about the majestic music herein for a second. Do you want another reason to lose your shit over this record? Well, you might be happy to know that Crashing Diseases & Incurable Airplanes, the band’s debut in question, is the first release in quite some time by glorious and legendary black metal / noise / industrial / experimental doom label Aurora Borealis, a label that has released incredible works by bands like Neige Morte, The Haxan Cloak, Thisquietarmy, Wraiths, Moss and Pyramids and which after seeming dead in the water for a couple years for reasons unknown has resurfaced with a glorious release. We are thankful for that, cause both Aurora and USA Out Of Vietnam rule in every fucking way possible and this is a pairing that any lover of experimental metal with brains will not want to miss.

USA Out Of Vietnam craft a majestic, ethereal, often surreal and desolate splicing of doom metal, shoegaze, drone, psych, post-rock, dream pop, and often zone out even into straight up Brit-pop inclinations, materializing a final sonic result, that, believe us, you have never fucking heard in your whole life. The band’s sound is centered around thick, crushing and foggy guitars that seem to be driven by minimal distortion though and which appear to be more layered and pancaked one on top of another more than thrusted by distortion. On top of that are pounding and scattered drums that form a hysteric and hypnotic heart beat as a rhythmic backdrop to all the waves and tides of guitars constantly swinging back and forth. Make no mistake, these are all elements that create the blueprint for your typical doom album. But then, this shit is not doom cause so much more happens, and so much insanely awesome shit happens all around to separate this band and its music from what we would all commonly define as doom. The vocals, for example, find no place in doom metal. You could find them in bands like Nothing, True Widow, Slowdive, Low or other shoegaze bands where the beautifully sung and chanted vocals are semi-buried in enormous washes of white noise and static. The whole feat turns out to be extremely luminous, cluttered with light and rays of white magnificence, angelical almost. You can hear some echoes of the most melancholic moments of Jesu in here, as well other more intense moments that can bring the mind back to bands like A Place To Bury Strangers and Nadja.

But there is more. Much More. Take the colossal buildups and collapses of bands like Swans, Earth, Sunn O))), Godspeed You! Black Emperor and Red Sparrowes. Yup, take those and add them to the mix and you will soon realize how fucking crazy this band’s music is. It’s not only pounding, dense, magmatic, magnificent and grand, but it also evolves, morphs and snowballs into colossal escalations of obliterating intensity in which everything collapses into giant implosions of light and color. The final touch of class on this mesmerizing release is the ability of the damn thing to often make you bang your head and rock you into bliss. More often than not, in fact, the riffing compacts itself and intensifies, becoming both crushing and cruising. In these moments, the band loses its shit completely, launching into massive gallops of sludgy metal reminiscent of bands like Boris and Pelican. And in all of this pulverizing heaviness and crushing intensity, the band manages to remain focused on their beautiful pop inclinations, in which soothing and ethereal vocals, organs, pianos and strings ring out in a mesmerizing bliss of color and light. If you thought no one had anything more to say in the world of post-rock, think again, in case anyone everyone thought that would be the case USA Out Of Vietnam have just proven everyone wrong. Out in the US also through New Damage Records. In this article:doom, DOOM METAL, Post Rock, shoegaze, slider, USA Out Of Vietnam