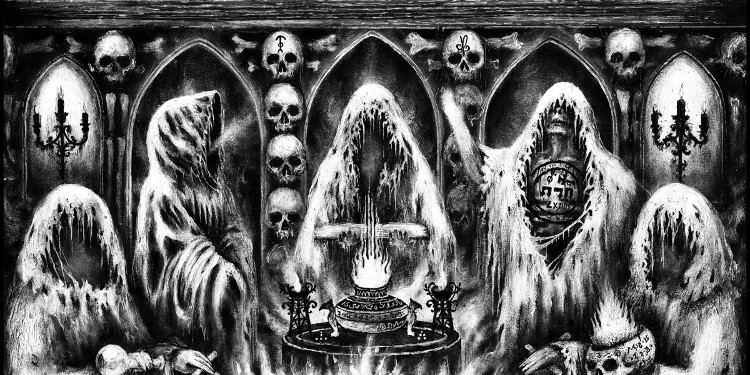 Harvest Gulgaltha‘s slow and rotten blackened death-doom is both punk as fuck as majestic as hell, mesmerizing in its simplicity but at the same time towering in its commanding dominance and undisputed majesty. Ever since encountering their I demo back in 2012, I was blown away. I was fascinated by the band’s hallucinated and disfiguring take – in my eyes at least – on the music of Amebix, and of the filthiest crust punk as whole. I got fixated on the way this band was capable of disfiguring the genre entirely and subjugating it to the most ravenous forces of hell, blending it with the most death-ridden black and death/doom metal; defacing it, yet keeping it alive and enhancing its most iconic traits through an otherworldly blood-pact with the dark forces of the underworld. Keep in mind, however, that Amebix  (like Bathory, Hellhammer, Celtic Frost etc), are only a starting point for Harvest Gulgaltha – what comes as a whole, as the music slowly progresses, rotting your mind and ravaging your senses, is a slow and putrid descent into lightless fucking torment. Their music is like a slow, mortiferous, and cavernous howl rupturing from the bowels of hell. It sounds like a rumble yielded by the digging of one billion worms as they tunnel through the soil of the underworld, materializing a maze of hell-spawned horror.

And this brand new Altars of Devotion debut full length of theirs (not factoring in the Necrosophic compilation released not long ago on tape) picks up precisely from where the I demo had left off, presenting us a band at the top of their game and threatening as fuck in their otherworldly intentions. Death rules everything in this band’s music. The echoes of the underworld permeate every passage of this record, and as listening progresses the listener feels as if they are lost in a  catacomb labyrinth with the eyeless sockets of a million motionless skulls staring them down and the stench of rotting death pushing its way through the nostrils with abrupt ignorance. Harvest Gulgaltha’s slow, downtuned, and mummified tremolo-picked riffs bring to mind the most glorious and heaviest moments of the Ruins of Beverast, while the austere and martial Bolt Thrower-worshipping rhythm section carves deep and oozing jags into flesh with the ease of a plow passing through a grave yard, and the cavernous and tortured vocals evoke omens of total rot and perdition – something that you won’t easily forget and which will get burned into your brain like lucid trauma. The entire “package”  envisioned by this band is both timeless sounding and incredibly sinister at the same time, and it’s assembled in a way that appears both meticulous, and incredibly instinctual, as if cannibal and bloodthirsty cavemen have suddenly somehow harnessed and subjugated the incredible powers of the underworld, using them for unthinkable means. Mentioning one song VS. another is a hard task in a record like this, as the work appears like a continuum – a steady flow of sound and emotions that seems seamless and boundless in its ever-flowing majesty. Every song is an essential constituent to a whole which reveals itself in its full and monstrous grandeur only when the listen is through, appearing to be more like an experience as a whole than a collection of individual songs. Every track is in fact thrust forward by a butchering drudge of double bass, and by slow, bone-sawing riffs that design a continuous and trance-inducing death march down into the slime pits of oblivion,  deep within the belly of the underworld, and the band does little to steer out of this formula, opting for an approach which seems essential but extremely methodic at the same time.