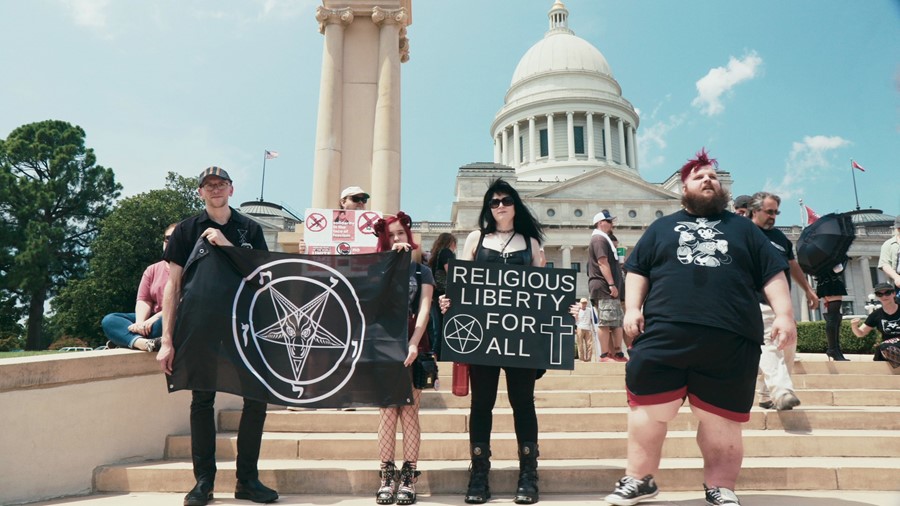 This feature was taken from Dazed Digital

“The night Donald Trump was elected president, we saw a huge spike in people becoming members of the Satanic Temple,” says Lucien Greaves, enigmatic leader of the dynamic and rapidly growing religion. In fact, the Satanic Temple is expanding at such a pace, it’s become the focus of a new documentary – but what exactly is a 21st century Satanist?

“I’d seen news stories about the Satanic Temple, and they were all pretty similar,” Lane tells Dazed. “They were saying it was a satirical prank and that they weren’t really Satanists. It wasn’t until I came across a longer piece where I learned more about what was going on – and that there were all these new chapters forming all over the place. It became more interesting the more I engaged with it.” Eventually Lane’s research led her to Greaves, the Temple’s self-described ‘reluctant leader’ and figurehead for all media dealings.

“The first thing that struck me was how quiet and unassuming he was,” she says, recalling their first meeting. “He didn’t come across as your typical religious leader: he’s quiet, studious, serious and private, and wasn’t exceptionally excited to be on camera. It felt like he’d been called to do this work so was going to do it the best he could.”

Lane’s first impressions were accurate. For Greaves, the Satanic Temple is no gimmick. It’s a place for those who feel disenfranchised with the world and want a community to help them combat it. “I didn’t take it lightly when I determined to become the voice of this movement – it really felt like suicide to me,” Greaves reveals. “I was keenly aware of the Satanic Panic from the 80s and 90s and how lives were ruined by the attribution of Satanism. I felt like if we weren’t vindicated in what we were doing, we would ruin our lives. We live in a Google-era and I would never be able to walk away.”

It’s truly no wonder Greaves was so wary. Talk to anyone about Satanism, and blood-drenched ritual sacrifice and tired old stereotype emerge. “The Hollywood conception of Satanism? That doesn’t exist,” asserts Lane. “There aren’t people like there are in Rosemary’s Baby or American Horror Story that literally worship the devil, do acts of evil, and try to bring about the apocalypse. The people who exist in the world and call themselves Satanists are typically atheists who embrace the idea of Satan as a literary figure that stands for rebellion, skepticism, and the value of being an outsider,” she explains. “The Satanic Temple is one instantiation of that belief system.”