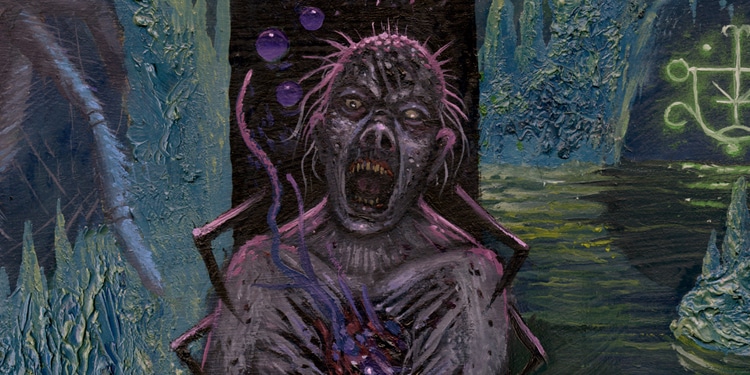 Sentient Ruin Laboratories, Memento Mori, Dawnbreed Records, and To the Death Records are releasing the latest scourge of humanity presented by old-school death metal band, Petrification, called Hollow of the Void. This album marks another journey into subterranean sewage tunnels for the likes of old-school death metal fans, as Petrification’s frantic but mostly controlled guitar attack paced by thudding drumming and deep basso profundo thunder are sure to send fans spelunking into caverns and mineshafts in a prelude to disaster. Why seize the heavens when only light shines brightly in open skies? Take to the darkness and experience the sense and sentience of being buried alive.

Which is what for the most part takes place when listening to Hollow of the Void.  The guitars remind me slightly of defunct extreme metal unit Human Remains. Petrification’s punk fusion with death metal makes riffs short but bitter wormwood sweet, like the kiss of a matriarch buried in a long-forgotten family crypt. The drumming adequately paces the fury of the guitar gymnastics, sometimes filling-in with the deft skill of a meat butcher wielding a chopping knife.  The guitars sound like spider venom is dripping from the steel strings. You can even say they weave web patterns around your eyes, and they infiltrate your ears the way they do in haunted mansions kids won’t dare spend a night in even if dared by not-so-well-meaning friends. The fact is, Petrification’s sound is one of a kind these days, and Cvlt Nation is here to present a sound byte for fans who want more bark than bite – serious death metal bark, and more in the manner of death metal for the rabid underground fan.

The cover art is charming in the 80’s style of death metal artwork. There’s not a single track wasted on ambient music. The moment you hit the play button, death metal of the superlative type exudes like miasma from your speakers.  Petrification rises from the sewage tank with an aura of green virulent smoke. Great death metal might often be overlooked, but fans who want what this band offers will find this invaluable while vinyl or digital copies are in stock. Drape the walls with bowels of holly now. Disease, degeneration, petrification. Support underground death metal.